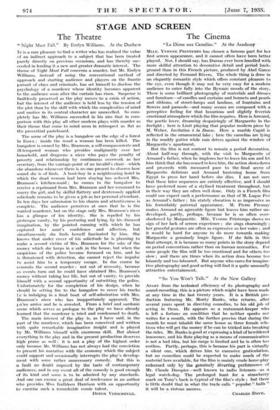 MLLE. YVONNE .PRINTEMPS has chosen a famous part for her first screen appearance, and it cannot often have been better

played. Nor, I should say, has Dumas ever been handled with

more skilful attention to decorative .detail and period back7 ground than in this French picture, produced by Abel Gance

and directed by Fernand Rivers. The whole thing is done in

an elegantly romantic, style which offers constant pleasure to the eye, even though it may not be very easy for a modern audience to enter fully. into the Byronic moods pf the story. There is some brilliant photography Of materials and dresses and furniture—of candles and curtains and bonnets and pearls and ribbons, of street-lamps and landaus, of fountains and flowers and parasols—and many scenes are composed with a perceptive feeling for that luxurious and slightly feverish emotional atmosphere which the film requires. Here is Armand, the poetic lover, dreaming despairingly of Marguerite in the firelight ; here is Liszt playing that popular modern piece by M. Weber, Invitation a la Danse. Here .a marble Cupid is reflected in the ornamental lake ; here the camelias are lying in the muddy gutter while rain drives against the window, of Marguerite's apartment.

But the film is not content to remain. a period decoration. About half-way through, with the visit to Marguerite of Armand's father, when he implores her to leave his son and let him think that she has ceased to love him, the action slows down and proceeds with measured pace to the final scene of Marguerite delirious and Armand hastening home from Egypt to press her hand before she dies. I am not sure that these later sequences are entirely effective, and I should have preferred more of a stylized treatment throughout, but in their way they are often well done. Only in a French film could one expect such a performance as that of M. Lugne Poe as Armand's father ; his stately elocution is as impressive as his formidably paternal appearance. M. Pierre Fresnay makes Armand an agreeable figure but leaves him rather un- developed, partly, perhaps, because he is so often over- shadowed by Marguerite. Mlle. Yvonne Printemps shows no sign of her lack of screen experience ; she sings charmingly ; her graceful gestures are often as expressive as her voice ; and it would be hard for anyone to do more towards making Marguerite a genuinely tragic figure. If she • fails, M this final attempt, it is because so many points in the story depend on period conventions rather than on human necessities, For some people the film will be too emotional and for others too slow ; and there are .times when its action does become too leisurely and too laboured. But anyone who cares for imagina- tive photography, and good acting will find it a quite unusually attractive entertainment..

"So You Won't Talk." At the New Gallery

APART from the technical efficiency of its photography and sound-recording, this is a picture which might have been made at any time in the last twenty years. It is a British pro- duction featuring Mr. Monty Banks, who returns, after several years spent in directing comedies, to his old job of acting in them. He appears as a restaurant-keeper who is left a fortune on condition that he neither speaks nor writes for a month, with the further proviso that during the month he must inhabit the same house as three female rela- tives who will get the money if he can be tricked into breaking the rules. Mr. Banks is good at expressing a kind of bewildered innocence, and his flute playing as a means of communication is not a bad idea, but his range is limited and he is often too restless. Partly, perhaps, this is because his part is virtually a silent one, which drives him to excessive gesticulation, but no comedian could be expected to make much of the material here available, for the film is mainly crude horse-play redeemed only by the genuinely diverting performance of Mr. Claude Dampier---well known to radio listeners—as a legal watch-dog. The prolonged hunt for a strawberry mark on Tony's back is typical of the film's style ; but there is little doubt that in what the trade calls " popular," halls" it will be a riotous success, • CHARLES .DAVir. •