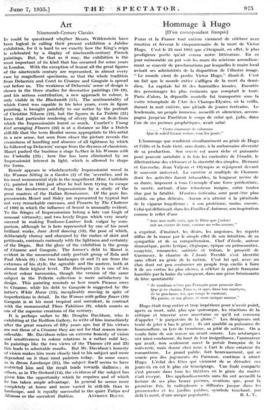 Jr could be questioned whgther Messrs. Wildenstein have been logical in calling their present exhibition a Jubilee exhibition, for it is hard to see exactly how the King's reign is celebrathd by a display of nineteenth-century French paintings. ' But, be that as it may, the exhibition is the most important of its kind that has occurred for some years in London. With the exception of Seurat all the great figures of the nineteenth century are represented, in almost every case by magnificent specimens, so that the whole tradition from Delacroix and Corot to Cez.anne and Gauguin is spread out before us. The weakness of Delacroix' sense of design is shown in the three studies for decorative paintings (16-18), and his serious contribution, a new approach to colour, is only visible in the Blacksmith (15). The sentimentality of which Corot was capable in his later years, even in figure painting, is brought painfully to our notice by the portrait of Christine Nilsson (19), but the figures in La Toilette (21) have that particular rendering of silvery light on flesh from which the Impressionists learnt so much. Courbet's Young Girl arranging Flowers (22) is at a distance so like a Dutch still-life that the term Realist seems appropriate to this artist in a new sense, but seen from closer the picture reveals the creaminess of handling and absence of all tightness by which he followed up Delacroix' escape from the dryness of classicism. Manet pushed the business a stage fu.ther in his Woman with Ike Umbrella (23) ; here line has been eliminated by an Impressionist interest in light, which is allowed to shape the forms.

Renoir appears in wholeheartedly Impressionist mood in the Woman Sitting in a Garden (2) of the 'seventies, and in his most monumental style in the magnificent Mme. Caillebotk (1), painted in 1883 just after he had been trying to escape from the incoherence of Impressionism by a study of the great masters of the Italian Renaissance. Of the pure Im- pressionists Monet and Sisley are represented by typical but not very remarkable canvases, and Pissarro by The Chatterer of 1892 in which the influence of Seurat is unusually evident. To the fringes of Impressionism belong a late van Gogh of unusual virtuosity, and two lovely Degas which very nearly succeed in making Toulouse-Lautrec look vulgar by com- parison, although he is here represented by one of his most brilliant works, Jane Avril dancing (13), the pose of which, deliberately clumsy and obscured by the rushes of skirt and petticoats, contrasts curiously with the lightness and certainty of the Degas. But the glory of the exhibition is the group of Camille and Gauguin. The former's debt to Manet is evident in the unsuccessful early portrait group of Zola and Paul Alexis (8) ; the two landscapes (6 and 7) are from the extremes of his style, the agreable and the austere, both at almost their highest level. The Harlequin (5) is one of his richest colour harmonies, though the version of the same subject in the Pellerin collection is more satisfactory in design. This painting reminds us how much Picasso owes to Cezanne, while his debt to Gauguin ,is suggested by the latter's White Horse (12), inexplicably moving in spite of imperfections in detail. In the Woman wit/v yellow flower (10) Gauguin is at his most tropical and succulent, in contrast with the monumental Three Tahitians (9), which counts as one of the supreme creations of the century.

It is perhaps unfair to Mr. Douglas Davidson, who is exhibiting at the Redfern Gallery, to write of-him immediately after the great masters of fifty years ago, but if his virtues are .not >those of a Cezanne they are not for that reason incon- siderable. Mr. Davidson-relies on extreme honesty of vision and sensitiveness to colour relations in a rather mild key. In paintings like the two views of the Thames (19 and 23) this leads to admirable results. But Mr. Davidson's honesty of vision makes him more closely tied to his subject and more dependent on it than most painters today. In some cases, as in Devon Landscape-.(21), the subject itself seems to have restricted him and the result tends towards dullness ; in others, as in The Orchard (14), the vividness of -the subject has given him the opportunity which he reqUires and of which he has taken ample advantage. In general he seems more completely at home and more varied in still-life than in landscape, and is equally successful in the-quiet Tulips and