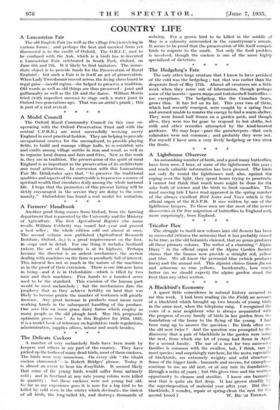 A Farmers' Handbook • Another good thing comes from Oxford,

from the farming department that is parented by the University and the Ministry of Agriculture. The first Agricultural Register (the name recalls William Cobbett) was issued last year and proved a best seller ; the whole edition sold out almost at once. The second volume now published (Agricultural Research Institute, Oxford, 58.) is a great improvement on the first, in scope and in detail. For one thing it includes Scotland (where the art of husbandry is at its highest). Perhaps because the director is an ardent mechanizer, the section dealing with machines on the farm is peculiarly full of interest This interest lies not so much in the nature of the machines as in the proof of their extension. There is one 500-acre farm in being—and it is in Oxfordshire—which is tilled by two men and their machines. Five hands to a hundred acres used to be the standard. This excision of the human part would be most melancholy ; but the mechanizers dare the prophecy that as they achieve fertility on land that was likely to become prairie the number of workmen will greatly increase. Any great increase in products must mean more working hands in the subsequent handling of the produce. One sees this on some grass dairy farms which employ as many people as the old plough land. May this prognostic optimism prove true ! As to this Register for 1934, 1935, it is a model book of reference on legislation, trade regulations, administration, supplies offices, labour and much besides.