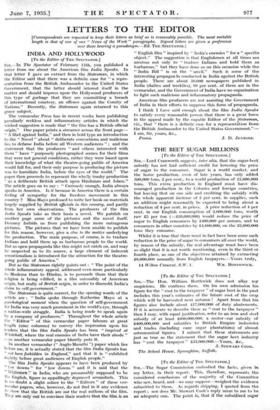 [To the Editor of THE SPECTATOR.] SIR,—Lord Cranworth suggests, inter alia, that the sugar-beet, subsidy has not had sufficient credit for lowering the price of sugar to the consumer. Sugar is a world market, and the home production, even of late years, has only added 500,000 tons, 2 per cent., to a world production of 25,000,000 tons. This extra production in England must have dis- couraged production in the Colonies and foreign countries,• but leaving that on one side and crediting the subsidy with the whole apparent increase of 2 per cent, in supplies, such an addition might reasonably be expected to bring about a reduction of 4 per cent, in prices. A price reduction of 4 per cent, in our English consumption of 2,000,000 tons, worth raw £5 per ton ( =210,000,000) would reduce the price of sugar to English consumers by £400,000 per annum, and to consumers in other countries by £4,600,000, on the 23,000,000 tons they consume.

Whilst it is true that there must in fact have been some such reduction in the price of sugar to consumers all over the world, by reason of the subsidy, the real advantage must have been so slight that it is not worth mentioning, even in the third or fourth place, as one of the objectives attained by extracting £6,000,000 annually from English taxpayers.—Yours truly,