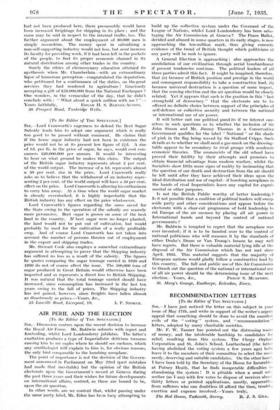 AIR PERIL AND THE ELECTION

[To the Editor of THE SPECTATOR.] Sin,—Discussion centres upon the recent decision to increase the Royal Air- Force. Mr. Baldwin submits with regret and foreboding, whilst Lord Londonderry jubilates. The latter's exaltation produces a type of Imperialistic delirium tremens causing him to see eagles where he should, see cuckoos, which any ornithologist will explain to him is, for obvious reasons, the only bird comparable to the bombing aeroplane.

The point of importance is not the decision of the Govern- ment announced in Parliament on, May 22nd (past mistakes had made that inevitable) but the opinion of the British electorate upon the Government's record at Geneva during the past three years and their wishes for future developments on international affairs, centred, as these are bound to be, upon the air question.

In other words, are we content that, whilst passing under the same- party label, Air. Eden has been busy attempting to build up the collective sys tern under the Covenant of the League of Nations, whilst Lord Londonderry has been sabo- taging the Air Commission at Geneva ? The Peace Ballot, derided and abused in some quarters in its early stages, is now approaching the ten-million mark, thus giving concrete evidence of the trend of British thought which politicians of any party will be rash to ignore.

A General Election is approaching ; also approaches the annihilation of our civilization through aerial bombardment if present tendencies continue. The political leaders of all three parties admit this fact. It might be imagined, therefore, that (a) because of British position and prestige in the world and consequent responsibility to take a constructive lead, (b) because universal destruction is a question of some import, that the coming election and the air question would be closely related. Yet it appears that such is the position in this "last stronghold of democracy" that the electorate are to be offered no definite choice between support of the principles of self-defence or collective security and between the national or international use of air power.

It will better suit our political pund its if we interest our- selves in such questions -as to whether the inclusion of Sir John Simon and Mr. Jimmy Thomas in a Conservative Government qualifies for the label "National "or the shade of pink in the flag being waved by Sir Stafford Cripps. Such details as to whether we shall need a gas-mask on the dressing- table appear to be secondary to rival groups with academic economic theories. The economists of the old school have proved their futility by their attempts and promises to obtain financial advantage from modern warfare, whilst the Socialists show little more signs of reality by insinuating that the question of our death and destruction from the air should be left until after they have achieved their ideas upon the ideal distribution and use of capital—if bombing aeroplanes in the hands of rival Imperialists leave any capital for experi- mental or other purposes.

Is not the British Public worthy of better leadership ? Is it not possible that a coalition of political leaders will sweep aside party and other considerations and appear before the electorate with a clear-cut programme of bold leadership to rid Europe of the air menace by placing all air power in International hands and beyond the control of national governments ?

Mr. Baldwin is tempted to regret that the aeroplane was ever invented ; if it is to be handed over to the control of national politicians who will measure it by the standards of either Drake's Drum or Van Tromp's broom he may well have regrets. But there is valuable material lying idle at the disposal of the Air Commission which has not met since April, 1933. This material suggests that the majority of European nations would gladly follow a constructive lead by this country. The full and public use of this Air Commission to thrash out the question of the national or international use of all air power should be the determining issue of the next