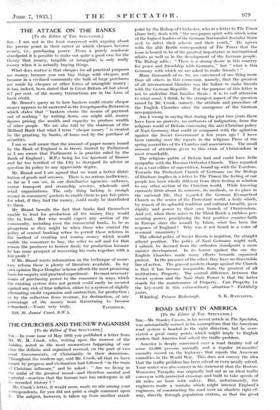 THE ATTACK ON THE BANKS

[To the Editor of THE SPECTATOR.] SIR,—I am not in the least concerned with arguing about the precise point in their career at which cheques become money, i.e., purchasing power. From a purely academic standpoint it is possible to make out quite a good case for the theory that money, tangible or intangible, is only really money when it is actually buying things.

What does matter is that cheques for all practical purposes are money, because you can buy things with cheques and because in a civilized community the bulk of large purchases are made by cheques or other forms of intangible money : it has, indeed, been stated that in Great Britain all but about 0.7 per cent. of the money transactions are in the form of bank credit.

Mr. Brand's query as to how bankers could create cheque money appears to be answered in the Encyclopaedia Britannica which states that "bankers create the means of payment Out of nothing" by writing down, one might add, money figures pricing the wealth and capacity to produce wealth of other people. We are also told by the chairman of the Midland Bank that what I term "cheque money" is created by the granting, by banks, of loans and by the purchase of securities. •

Mr. Brand and I are agreed that we want a better distri- bution of goods and services. There is no serious inefficiency, as far as I can' see, in our distributive agencies—railways, motor transport and steamship services, wholesale and retail organizations. The only thing lacking is enough money in consumers' pockets to enable them to pay fair prices for what, if they had the money, could easily be distributed to them.

Mr. Brand bewails the fact that banks find themselves unable to lend for production all the money they would like to lend. But who would expect any section of the community, including even the commercial banks, to be as prosperous as they might be when those who control the policy of central banking refuse to permit those reforms in the method of creating and issuing money which would enable the consumer to buy, the seller to sell and for that reason the producer to borrow freely for production because he has some prospect of recovering his costs together with a fair profit ?

If Mr. Brand wants information on the technique of mone- tary reform there is plenty of literature available. In my own opinion Major Douglas' scheme affords the most promising basis for enquiry and practical experiment. Its most necessary issues of purchasing power to the consumer in ways which the existing system does not permit could easily be secured against any risk of true inflation, either by a system of slightly alternating credit expansion and contraction, for production ; or by the collection from revenue, for destruction, of any percentage of the money issue threatening to become