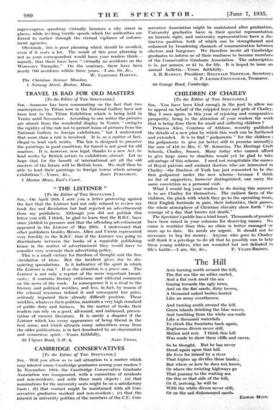 • [To the Editor of THE SPECTATOR.] SIR,—You have been kind enough in the past to allow me to appeal on behalf of the crippled boys and girls of Chaney.

May I once again, in this year of rejoicing and comparative prosperity, bring to the attention of your readers the work that is being done there for small and suffering children ?

• Princess Alice, Countess of Athlone, recently published the details of a new plan by which this work can be furthered and extended. It is to find godparents" for the children : the godparents to give (or better still to promise annually) the sum of 110 to Mrs. C. W. Kimmins, The Heritage Craft Schools, Chailey, Sussex. Many today who cannot afford

to give large sums to charities would yet be glad to take advantage of this scheme. I need not recapitulate the names of Royal patrons and eminent doctors who are interested in Chailey—the Duchess of York has just consented to be the first godparent under the new schemebecause I think no list of supporters, however distinguished, can carry the same conviction as a personal visit.

What I would beg your readers to do during this summer is to see Chaney for themselves. The radiant faces of the children, the pluck with which they go to the operating room, their English fortitude in Pain, their industries, their games, the whole atmosphere of Christian chivalry show forth "the courage of a day that knows not death."

The Spectabyr's public has a kind heart. Thousands of pounds have been raised in your columns for deserving causes. No cause is worthier, than this, no clinic is better managed or more up to date. Its needs are urgent. It should not be necessary to beg for money. Anyone who goes to Chailey will think it a privilege to do all that he possibly can to help these young soldiers, who are wounded but not defeated' in