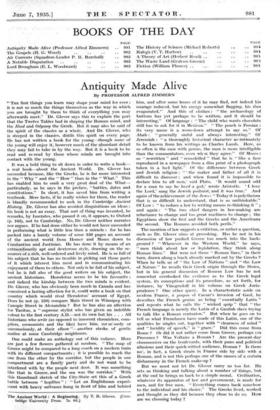 "THE first things you learn may shape your mind for ever ; it is not so much the things themselves as the way in which you are brought by them to think of everything you may afterwards meet." Dr. Glover says this to explain the part that the Twelve Tables had in shaping the Roman mind, and the Iliad and Odyssey the Greek. But it may also be said of the spirit of the classics as a whole. And Dr. Glover, who steeped in the classics, distils this spirit on every page. He has not written a: book for the young—though some of the young will enjoy it; however much of the abundant detail they may fail to take in by the way. But it is a book to be read and re-read by those whose minds are brought into contact with the young.

It was a bold thing to sit down in order to write a book— a real book—about the Ancient World. Dr. Glover has succeeded because, like the Greeks, he is far more interested in the " Why " and the " How " than in the "What." This has enabled him to omit a very great deal of the What— particularly, as he says in the preface, "battles, dates and constitutions." In short, it has saved him from writing a textbook. Mere facts, if he really wishes for them, the reader is blandly recommended to seek in the Cambridge Ancient Ilistory. Dr. Glover has also avoided disquisitions on ideas : his book is not an essay. That sort of thing was invented, he remarks, by Isocrates, who passed it on, it appears, to Oxford (p. 163), not to Cambridge. No, Dr. Glover neither narrates nor argues. If he had done either he would not have succeeded in performing what is little less than a miracle : for he has packed into a handy volume of some 350 pages an account of the ancient world from Homer and Moses down to COnstantine and Justinian. He has done it by means of an extranAlinarily apt and dexterous style, drawing on the re- sources of a rich, well-ordered and lively mind. He is so full of his subject that he has no trouble in picking out those parts of it which interest him most and in communicating his enjoyment of them to others. Not only is he full of his subject, but he is full also of the good writers on his subject, the ancient historians. Herodotus seems to be his favourite ; and indeed the kinship between the two minds is evident. Dr. Glover, who has obviously been much in Canada and has conceived a lasting affection for it, could write a book on that country which would rival Herodetus' account of Egypt. Does he not (p. 250) compare Main Street in Winnipeg with Canopic Street in Alexandria ? But he has also an affection for Tacitus, a "supreme stylist who has given an indelible colour to the first century A.D.—not its own but his . . . All historians who write (as opposed to innocent chroniclers, com- pilers, economists and the like) have him, cor senusly or unconsciously, at their elbow "—another stroke of gentle malice at some Cambridge neighbours.

One could make an anthology out of this volume. Here are just a few flowers gathered at random. "The map of Greece might be compared-to a long coach on a modern train with its different compartment's; it is possible to reach the one from the other by the corridor, but the people in one compartment are a family party and do not want to be interfered with by the people next door. It was something like that in Greece, and the sea was the corridor." With this thumbnail sketch of the City-State set this of a Greek battle between " hoplites " : "Let an Englishman experi- ment with heavy suitcases hung in front of him and behind

him, and after some hours of it he may find, not indeed his courage reduced, but his energy somewhat flagging, his élan evaporated." And this of clothes : "the archaeology of buttons has yet perhaps to be written, and it should be interesting." Of language : The child who wants chocolate still has to ask for it in Mexican." "The peach is Persian : its very name is a worn-down attempt to say so." Of Ahab : "generally sinful and always interesting." Of Jeremiah : "a thoroughly historical character as.intimately to be known from his writings as Charles Lamb. Here, as so often is the case with genius, the man is more intelligible than the conunentators, even wh3n they agree." Of Moses : so 'rewritten" and 'remodelled" that he is "like a face reproduced in a newspaper from a dim print of a photograph taken in a bad light." Of the difference between Greek and Jewish religion : "'the maker and father of all it is difficult to discover ; and when found it is impossible to declare him to all men,' said Plato. 'It would sound odd for a man to say he loved a god,' wrote Aristotle. 'I love the Lord,' sang the Jewish psalmist, and it was true." And again of the achievement of the Jews : "Today it is polytheism that is so difficult to understand, that is so unthinkable." Of Law : "to reduce a law to writing means re-thinking it " ; and again : "The two chief dangers in law-making are reluctance to change and too great readiness to change ; the Egyptians show the first and the Greeks and the Americans the second. The Romans avoided both perils."

The mention of law suggests a criticism, or rather a question, such as Dr. Glover aims at provoking. Has he not in his discussion of law pushed Greece too much into the back- ground ? "Wherever in the Western World," he says, "men think about law or legislation, they think along Roman lines." But were not those "Roman lines," in their turn, drawn along a track already marked out by the Greeks ? When he tells uS of "the Law of Nations" and "the Law of Nature he recalls their Greek origin through the Stoics, but in his general discussion of Roman Law has he not somewhat overlooked the evidence as to the Greek legal system, its conceptions and its procedure, as set forth, for instance, by Vinogradoff in his volume on Greek Juris- prudence? One other query. In a characteristic aside on modern France, it propos of Caesar's invasion of Gaul, he describes the French genius as being "essentially Latin" and repeats what he calls the "wicked quip" that "the French language is merely the Latin of a Gaulish slave trying to talk like a Roman centurion." But when he goes on to tell us what Frenchmen have made of this Latin, one of the qualities he singles out, together with "clearness of mind" and "lucidity of speech," is " grace." Did this come from Rome ? Or did it not rather come from Greece, perhaps via Provence ? Was Voltaire a Roman ? Are the present-day chansonniers on the boulevards, with their puns and political allusions and their quick-witted audience, Roman ? Is there not, in fact, a Greek strain in France side by side with a Roman, and is not this perhaps one of the causes of a certain disharmony in the French make-up ?

But we must not let Dr. Glover carry us too far. He sets us thinking and talking about a number of things, but at the end he brings us back to a simple moral. Civilization, whatever its apparatus of law and government, is made for men, and for free men. "Everything comes back somehow to the individual and his choice." The Greeks lived, worked and thought as they did because they chose to do so. How are we choosing today ?