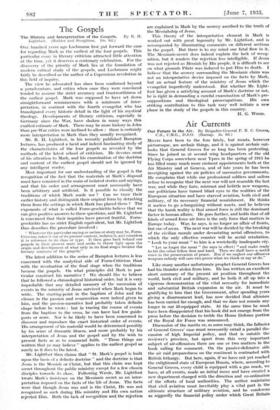 Page 22, 7 June 1935 — The Gospels The History and interpretation of the Gospels. By
Close

The Gospels The History and interpretation of the Gospels. By

R. H. Lightfoot. (Hodder and Stoughton. 10s. 6d.) ONE hundred years ago Lachmann first put forward the case for regarding Mark as the earliest of the four gospels. This particular essay in literary criticism attracted little attention at the time, yet it deserves a centenary celebration. For the

discovery of the priority of Mark lies at the foundation of modern critical study of the gospels, and Laehmann might fairly be described as the author of a Copernican revolution in this field of inquiry.

The view he advocated has since been confirmed beyond a peradventure, and critics when once they were convinced tended to assume the strict accuracy and trustworthiness of the earliest gospel. Mark was supposed to have set down straightforward reminiscences with a minimum of inter- pretation, in contrast with the fourth evangelist who has transfigured every historic detail in the light of his mystical theology. Developments of literary criticism, especially in Germany since the War, have shaken in many ways this exalted estimate of Mark. There may be more history in John than pre-War critics were inclined to allow : there is certainly more interpretation in Mark than they usually recognized. Mr. R. H. Lightfoot, in his recently published Hampton lectures, has produced a lucid and indeed fascinating study of the characteristics of the four gospels as revealed by the methods of the latest school of criticism. He devotes most of his attention to Mark, and his examination of the doctrine and content of the earliest gospel should not be ignored by any intelligent reader.

Most important for our understanding of the gospel is the recognition of the fact that the Tnaterials at Mark's disposal must have consisted in the main of isolated stories and sayings, and that his order and arrangement must necessarily have been arbitrary and artificial. Is it possible to classify the traditions of which Mark made use ? Can we trace their earlier history and distinguish their original form by detaching them from the settings in which Mark has placed them ? The exponents of what is called Form-geschichte believe that we can give positive answers to these questions, and Mr. Lightfoot is convinced that their inquiries have proved fruitful. Form- geschichte has no strict English equivalent, but Mr. Lightfoot thus describes the procedure involved :

Whatever the particular saying or at tion or story may be, Form- Criticism takes it out of its present context, isolates it, and considers it in reference to its class or type. It then goes back behind our gospels in their present state and seeks to throw light upon the origin and development of what only in its final stages became the literary contents of the gospels."

The latest addition to the series of Bampton lectures is less concerned with the analytical side of Form-Criticism than with the revaluation of the final stage when the traditions became the gospels. On what principles did Mark in par- ticular construct his narrative ? We should like to believe that he followed a chronological historical order, but it is very improbable that any detailed memory of the succession of events in the ministry of Jesus survived when Mark began to write. The starting-point in the baptism of John and the climax in the passion and resurrection were indeed given to him, and the passion-narrative had probably taken definite shape before he wrote ; but in tracing the course of events from the baptism to the cross, he can have had few guide- posts or none. Nor is he likely to have been concerned to discover and reproduce the exact historical order of events. His arrangement of his material would be determined possibly by his sense of dramatic fitness, and -more probably by his interpretation of Jesus and the gospel and by the wish to present facts so as to commend faith. "These things are written that ye may believe" applies to the earliest gospel as surely as it does to the latest.

Mr. Lightfoot then claims that "St. Mark's gospel is built upon the basis of a definite doctrine" and the doctrine is that Jesus is the Messiah or _Christ, but that this claim was kept secret throughout the public ministry except for a few chosen disciples towards its close. Following Wrede, Mr. Lightfoot treats Mark's insistence on the Messianic secret as an inter- pretation imposed on the facts of the life of Jesus. The facts were that though Jesus was and is the Christ, He was not recognized as such during His ministry and His own nation rejected Him. Both the lack of recognition and the rejection

are explained in Mark by the secrecy ascribed to the truth of the Messialiship of Jesus.

This theory of the interpretative element in Mark is worked out with great ingenuity by Mr. Lightfoot, and is accompanied by illuminating comments on different sections in the gospel. But there is to my mind one fatal flaw in it. The Messianic-secret does indeed explain the lack of recog- nition, but it renders the rejection less intelligible. If Jesus was not rejected as Messiah by His people, it is difficult to see on what grounds Pilate was induced to put Him to death. I believe that the secrecy surrounding the Messianic claim was not an interpretative device imposed on the facts by Mark, but an actual feature of the ministry of Jesus which the evangelist imperfectly understood. But whether Mr. Light- foot has given a satisfying account of Mark's doctrine or not, he is right in demanding a careful examination of Mark's pre- suppositions and theological preoccupations. His own striking contribution to this task may well initiate a new phase in the study of the gospels in this country.