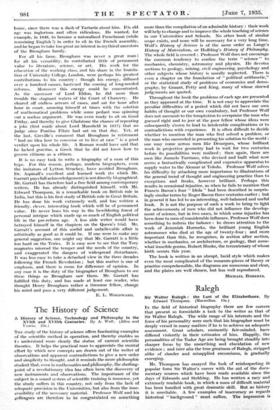 The History of Science

THE study of the history of science oilers fascinating examples of the scientific method in operation, and thereby enables us t3 understand more clearly the status of current scientific theories. It helps the practical man to appreciate the mental effort by which new concepts are drawn out of the welter of observations and apparent contradictions to give a new order and simplicity to thought, and it reminds the more philosophic student that, even in mathematics and philosophy, the starting- point of a revolutionary idea has often been the discovery of new instruments and observations. The importance of the subject in a sound system of scientific training is immense, yet the study suffers in this country, not only from the lack of adequate provision in the Universities, but also from the inac- cessibility of the necessary material. Professor Wolf and his colleagues are therefore to be congratulated on something more than the compilation of an admirable history : their work will help to change and to improve the whole teaching of science in our Universities and Schools. No other book of similar scope exists, and none will be necessary for a very long time. Wolf's History of Science is of the same order as Lange's History of Materialism, or Iloffding's History of Philosophy. The whole field is covered : Professor Wolf does not encourage the common tendency to confine the term " science " to mechanics, chemistry, astronomy and physics. He devotes sections to geology, mining, civil engineering, psychology and other subjects whose history is usually neglected. There is even a chapter on the foundation of "political arithmetic," or the statistical study of problems of economics and demo- graphy, by Graunt, Petty and King, many of whose shrewd judgements are quoted.

Throughout the book the problems of each age are presented as they appeared at ,the time. It is not easy to appreciate the ' peculiar difficulties of a period which did not have our own habits of thought or our own vocabulary, but Professor Wolf does not succumb to the temptation to overpraise the man who guessed right and to jeer at the poor fellow whose ideas were subsequently shown to lead to intolerable complications or to contradictions with experience. It is often difficult to decide- whether to mention the man who first solved a problem, or the man who succeeded in presenting his solution to the world : one may come across men like Desargues, whose brilliant work in projective geometry had to wait for two centuries before its possibilities were realized ; then again, there are men like Juanelo Turriano, who devised and built what now seems a fantastically complicated and expensive apparatus to supply water to the Alcazar" at Toledo. Professor Wolf solves his difficulty by attaching more importance to illustrations of the general trend of thought and engineering practice than to exceptions and freaks, however brilliant. Perhaps this results in occasional injustice, as when he fails to mention that Francis Bacon's four " Idols " had been described in surpris- ingly similar terms by Roger Bacon three centuries earlier ; but in general it has led to an interesting, well-balanced and useful book. It is not the purpose of such a work to bring to light the achievements of men who did not influence the develop- ment of science, but in two cases, in which some injustice has been done to men of considerable influence, Professor Wolf does something to redress the balance : he draws attention to the work of Jeremiah Horrocks, the brilliant young English astronomer who died at the age of twenty-four ; and more important than this, he recognizes, in section after section, whether in mechanics, or architecture, or geology, that some- what irascible genius, Robert Hooke, the tercentenary of whose birth occurs this year.

The book is written in an abrupt, lucid style which makes even the most complicated of the museurn-pieces of theory or practice comprehensible, the diagrams are numerous and clear, • and the plates are well chosen, but less well reproduced.