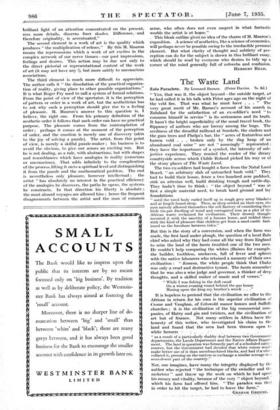 "YES, that was it, the object beyond—the outside target, as he had called it in his talk with Peter ages ago on the night of

the veld fire. That was what he must have . . . " The very great merit of Mr. Barnes's account of his search in Zululand for the satisfaction of an ex-soldier's need "to consume himself in service" is its seriousness and its truth. It hasn't the bright superficiality of the usual travel book, the flippancy of authors who are breezy among the bugs. The seediness of the dreadful railhead at Somkele, the cinders and the gum trees and Phelps's bar, the "acres of featureless and barren veld . . . broken only by the slag heap of an abandoned coal mine" are not ." amusingly " represented : they have the importance of a symbol, the intensity of sub- jective experience. They remind the reader of the dreary countryside across which Childe Roland picked his way or of

the stony places of The Waste Land.

The two ex-soldiers had bought a farm from the Natal Land Board, "an arbitrary slab of untouched bush veld." They had to build their house, fence a two hundred acre paddock, sink an artesian well, build drinking trough and cattle-dip.

They hadn't time to think : the object beyond" was at first a simple material need, to break hard ground and lay foundations

"until the tired body curled itself up in rough grey army blankets and at length found sleep. Then, as sleep settled on their eyes, the men naively allowed themselves the self flattery of considering their little tin-pot dwelling of wood and corrugated iron as a plot of the African waste reclaimed for civilisation. Their drowsy thought invested it with the sanctity of a human home, and tickled them with the kind of pleasure that children get from a sand-castle fash- ioned on the foreshore between tides."

But this is the story of a conversion, and when the farm was made, the first land under plough, the question of a local Zulu chief who asked why they had come all the way from England

to seize the land of the bantu troubled one of the two men. He couldn't help Tempering the whites (Baines for example,

the builder, toothless, unshaven, full of fever and spleen) with the native labourers who retained a memory of their own

civilization : " Kosana, the white people think that Chaka was only a cruel and destructive tyrant. The bantu remember

that he was also a wise judge and governor, a thinker of deep thoughts, and a skilled maker of music and of verses."

" While I was fishing in the dull canal

On a winter evening round behind the gas house Musing upon the king my brother's wreck ."

"as a result of a piirticukulY s'habby deal between two Government departments, the Lands Department and the Native Affairs Depart- ment. The land in question was formerly part of a scheduled native reserve, but the GoVernrneht had decided that white voters would make better use of it than unenfranchised blacks, and had the tsfor.‘ collared it, pressing on-thethatives in exchange a similar acreage in a

semi-desert part of tho,eountry." - Nor, one imagines, have many the integrity displayed by the author who rejected " the technique of the swindler and tho racketeer" and threw up the work on which he had spent his money and vitality; because of' the very "Object beyond: which his farm had offered him. "The paradox was that in order to hit the target, he had to leave the farm."