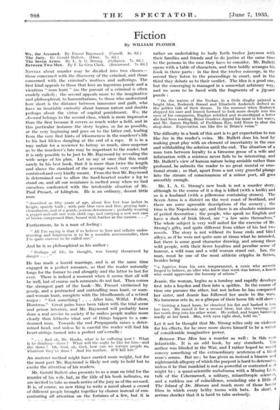 By WILLIAM PLOMER NOVELS about murder may be divided into two classes— those concerned with the discovery of the criminal, and those

concerned with the criminal's motives and sufferings. The first kind appeals to those that love an ingenious puzzle and a vicarious "man hunt" (as the pursuit of a criminal is often crudely called) ; the second appeals more to the imaginative and philosophical, to humanitarians, to those who understand how short is the distance between innocence and guilt, who have an insatiable curiosity about human nature and doubts

perhaps about the virtue of capital punishment. We, the Accused belongs to the second class, which is more impressive than the first because it covers so much wider a field, and in

this particular instance the story begins, so far as possible, at the very beginning and goes on to the bitter end, leading from the very first hints of irksomeness in the murderer's life to his last lifeless dangling at the end of a rope. It is in a way unfair for a reviewer to betray so much, since suspense as to the murderer's fate may be important to the reader, but it is only possible to be just to Mt. Raymond by revealing the wide scope of his plan. Let us say at once that this must surely be his best book, that it is more than twice the length and above the standard of the average novel, very carefully contrived and very kindly meant. From the first Mr. Raymond is determined not to allow the hard-hearted reader a leg to stand on, and all our resistance is melted away when we find ourselves confronted with the intolerable situation of Mr. Paul Presset, of Islington. He is an ordinary, decent little man

"described as fifty years of age, about five feet four inches in height, sparely built ; with pale blue eyes and thin, greying hair ; cleanshaven, and of a gentle, serious demeanour ; probably wearing a pepper-and-salt suit with cloth cap, and carrying a new suit case of brown compressed fibre, bound with leather at the corners . . ."

Furthermore, he is a man of feeling : "AU I'm saying is that if to believe in love and infinite under- standing and forgiveness is to be a maudlin sentimentalist, then I'm quite content to be called one."

And he is as philosophical as his author :

"Perhaps all life, he thought, was beauty threatened by danger . . "

He has made a horrid marriage, and is at the same time engaged in a perfect romance, so that the reader naturally longs for the former to end abruptly and the latter to last for ever. There is indeed a moment when it seems that all will be well, but of course such moments do not last. Then comes the strongest part of the book—Mr. Presset victimized by gossip, and a protracted and enthralling man hunt, or man-

and-woman hunt, complete with the bloodhounds of a retired major : "Got something ! . . • After him, Wilful. Follow, Huntress." Great pains have been taken with the trial scene and prison interiors, and ,Mr. Raymond will probably have done a real service to society if he Makes people realize more clearly than hitherto what sort of' things happen to a con- demned man. Towards the end Propaganda raises a deter- mined head, and unless lie is careful the reader will find his heart-strings turned into a perfect cat's-cradle :

An austerer method might have carried more weight, but for the most part Mr. Raymond is likely not only to hold but to excite the attention of his readers.

Mr. Gerald Bullett also presents to us a man on trial for the murder of his wife, but, RS the title of his book indicates, we are invited to take as much notice of the jury as of the accused.

It is, of course, no new thing to write a novel about a crowd of different people brought together by chance instead of con-

centrating all attention on the fortunes of a few, but it is

rather an undertaking to body forth twelve jurymen with their families and friends and to do justice at the same time to the persons in the case they have to consider. Mr. Bullett opens with a table of characters, and then boldly arranges his book in three parts : in the first the twelve converge, in the second they listen to the proceedings in court, and in the third they debate as to their verdict. The idea is a good one, but the converging is managed in a somewhat arbitrary way, and we seem to be faced with the fragments of a jig-saw puzzle :

"On the waters of the Neckar, in a little dinghy painted a bright blue, Roderick Strood and Elisabeth Andersch drifted on the golden tide of their dream. In the moment when Roderick shipped his oars and leaned forward to look more deeply into the oyes of his companion, Daphne refolded and re-enveloped a letter she had been reading, Brian doodeve dipped his razor in hot water, and Mr. James Bayfield, of Peckham Rye, told Ernie to shut the shop-door. Expectation ran like fire in Brian's veins."'

The difficulty in a book of this sort is to get expectation to run like fire in the reader's veins. Mr. Bullett does his best by making great play with an element of uncertainty in the case and withholding the solution until the end. The situation of a man torn between loyalty to a tiresome goose of a wife and infatuation with a mistress never fails to be interesting, and Mr. Bullett's view of human nature being amiable rather than profound, he submits the reader to no great mental or emo- tional strain ; so that, apart from a not very graceful plunge into the stream of consciousness of a minor poet, all goes smoothly enough.

Mr. L. A. G. Strong's new book is not a murder story, although in the course of it a dog is killed (with a knife) and so is a husband (with a pillowcase containing stones). The Seven Arms is a district on the west coast of Scotland, and there are some agreeable descriptions of the scenery ; the time is the Napoleonic age, and there is an absolute minimum of period decoration ; the people, who speak no English and have a dash of Irish blood, are "a law unto themselves." The whole subject is very well suited for the exercise of Mr, Strong's gifts, and quite different from either of his last two novels. The story is not without its loose ends and Mini alleys, as if he were not quite sure at times what he intended, but there is some good character drawing, and among these

wild people, with their fierce loyalties and peculiar sense of honour, a wild man and a wild woman stand out. Ian, the man, must be one of the most athletic cripples in fiction, besides being

"a fugitive from his own temperament, a cynic who secretly longed to believe, an idler who knew that work was better, a knave who could appreciate the honesty of others."

Jeanie, the woman, begins as a tomboy and rapidly develops first into a hoyden anoi then into a spitfire. In the course of time one pursues the other, but not before he has conquered her sister, and Jeanie has followed her uncle to the wars. No tameness sets in, as a glimpse of their home life will show :

"Getting a hand loose, he 'clenched his fist and bashed it into her face. He raised it for a second blow, but she, twisting, got her teeth deep into his other wrist. He yelled, and began battering madly at her head. She, with eyes tight shut, held on."

Let it not be thought that Mr. Strong relies only on violence for his effects, for he once more shows himself to be a writer of considerable imaginative power.

Between- Two Men has a murder as well : in this case infanticide. It is an odd book, by any standards. The author was blinded in the War, and I rather hoped he would

convey something of the extraordinary acuteness of a blind man's senses. But no ; he has given us instead a bizarre and

nightmarish allegory of which the purport is hard to determine, unless it be that mankind is not as powerful or contented as it might be ; a quasi-scientific melodrama with a Missing Link, talk of the Uebermensch, a solitary, misanthropic scientist, and a ruthless use of coincidence, reminding one a little of The Island of Dr. Moreau and much more of those horror films in which every belfry teems with bats. In short, a serious shocker that it is hard to take seriously.