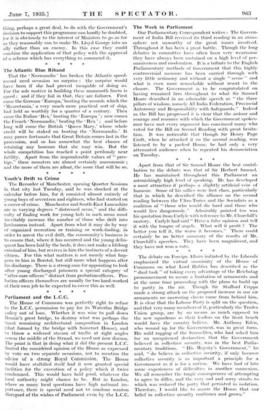 - Our Parliamentary Correspondent writes : The Govern- ment of India Bill received its third reading in an atmo- sphere not unworthy of the great issues involved. Throughout it has been a great battle. Though the long debates in committee have often been very wearisome they have always been sustained on a high level of per- suasiveness and moderation. It is a tribute to the English Parliamentary methods of Government that this highly controversial measure has been carried through with very little acrimony and without a single "scene " and what is even more remarkable without resort to the closure. The Government, is to be congratulated on having remained firm throughout to what Sir Samuel Hoare described in an admirable speech as "the three pillars of wisdom, namely All India Federation, Wovincial Autonomy and Responsibility with Safeguards." Indeed as the Bill has progressed it is clear that the ardour and courage and resource with which the Government spokes- men have met every argument has convinced many who voted for the Bill on Second Reading with great hesita- tion. It was noticeable that though Sir Henry Page Croft, when he attacked it on the second reading, was listened to by a packed House, he had only a very attenuated audience when he repeated his denunciation on Tuesday.