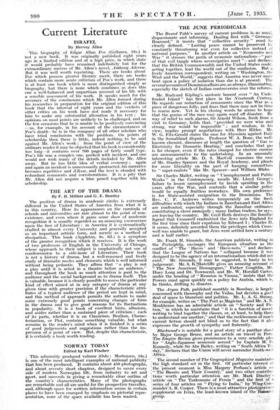 THE ART OF THE DRAMA By F. B. Millet and

G. E. Bentley The position of drama in academic circles is extremely different in the United States of America from what it is in this country. Here its appearances on the curricula of schools and universities are rare almost to the point of non- existence, and even where it gains some show of academic recognition it is usually regarded as an annoying excrescence upon the face of Literature : in America it is systematically studied in almost every University and generally accepted as an important artistic forth, not merely as a method of dissipation. This book (Appleton, 8s. 6d.) is a symptom of the greater recognition which it receives. It is the work of two professors of English in the University of Chicago, whose approach to their subject is emphatically not one of condescension to a side-issue of Literature. Their book is not a history of drama, but a well-reasoned and lively study of dramatic modes and elements which is well informed without being pedantic. They affirm that "a play is not a play until it is acted in a theatre before an audience," and throughout the book as much attention is paid to the audience and the social background as to drama itself. This is valuable, because it is clearly possible to assess the particular kind of effect aimed at in any category of drama at any given time with greater precision if the characteristic attri- butes of a typical audience of the period are kept in mind, and this method of approach permits the authors to make some extremely good points concerning changes of form in the drama and to give good reasons for its fluctuations in popularity. It is a book of excellent hints, allusions, and asides rather than a sustained piece of criticism : each of its parts, whether it is on Classicism, Realism, Charac- terization, or Plot, contains something. valuable, but what remains in the reader's mind when it is finished is a series of good judgements and suggestions rather than the im- pression of a point of view. But, despite this characteristic, it is certainly a book worth reading.