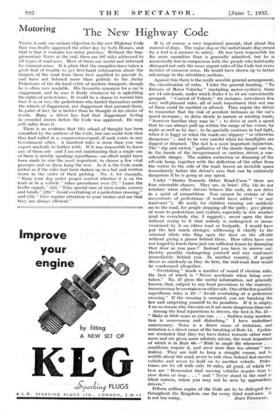 Page 32, 7 June 1935 — Motoring The New Highway Code TUERE is only one serious
Close

Motoring The New Highway Code TUERE is only one serious

objection to the new Highway Code that was finally approved the other clay by both Houses, and that is that it contains too many proVisos. Without the Sup- plementary Notes at the end, there are 107 rules addressed to all types of road-user. Most of them are useful and informed by common sense. It is plain that the compilers have taken a good deal of trouble to get first-hand information about the dangers of the road from those best qualified to provide it, and have not listened more than politely to the Jacky Fisherisms of the die-hard critic of modern transport, though he is often very readable. His favourite synonym for a car is Juggernaut, and he uses it freely whenever he is upholding the rights of pedestrians. It would be a shame to remind him that it is, or was, the pedestrians who hurled themselves under the wheels of Juggernaut, not Juggernaut that pursued them. In point of fact, he is luckier than he thought in his choice of words. Many a driver has had that Juggernaut feeling in crowded streets before the Code was approved. He may still suffer from it.

There is no evidence that this school of thought has been consulted by the authors of the Code, but one could wish that they had called in a compression-expert, if such exists in any Government office. - A hundred rules is more than you can expect anybody to bother with. If it was impossible to leave any of them out—and I am not maintaining that a single one of them is strictly speaking superfluous—an effort might have been made to star the most important, to choose a few vital precepts and on them hang the 'rest. As it is the Code reads rather as if the rules had been shaken up' in a hat and written down in the order of their picking. No. 5, for example, " Keep your dog under proper control whether it is on the road or in a vehicle "' takes precedence over (7) "Learn the traffic signals,- (23) " Take special care at cross roads, corners and bends," (29) "Avoid Overtaking at pedestrian crossing," and (53) "Give regular attention to your brakes and see that they are always efficient."

It is, of course, a very important precept, that about the control of dogs. The vague dog or the unfortunate dbg owned by a fool is a menace to safety. He has been responsible for lax more casualties than is generally admitted, but he is numerically few in comparison with the people who habitually disregard not only the more urgent rules Of the Code but every instinct of common sense. He would have shown up to better advantage in the subsidiary. sections...

Against Against this there is the really sensible general arrangement, the classification of ruIes. Under the general heading, "To Drivers of Motor Vehicles " (including motor-cyclists), there are 14 sub-heads, under which Rules 8 to 54 arc conveniently grouped. "Control of Vehicle," for instance, introduces five very well-phrased rules, all of such importance that not one of them could be omitted Or altered. They enjoin the driver to remember that the risk of accident increases as the car's

speed increases; to drive slowly in narrow Or winding roads, "however familiar they may -be " ; to drive at such a speed that he can always pull 'up- within the range of his vision, by night as well as by day; to be,specially cautious in bad light, when it is foggy or when the roads are slippery or otherwise dangerous " ; and to be very careful when his headlights are dipped or dimmed. The last is a most important injunction. The" dip and switch "palliative of the dazzle danger can be, in the hands of the inexperienced or careless driver, a con- siderable danger. The sudden extinction or dimming of the• off-side lamp, together with the deflection or the other from the centre to the side of the road, leaves an invisible space immediately before the driver's eyes that can be extremely dangerous if he is going at any speed.

Under "Duties Towards Other Road-Users" there are four admirable clauses. They are, in brief : (No. 14) do not retaliate when other drivers behave like cads, do not drive in a spirit of competition. You cannot be certain of the movements of pedestrians (I would have added "or any road-user "). Be ready for children running out suddenly on to the road, for people stepping off the path ; give plenty of room to pedestrians and cyclists, especially in wet weather (and to everybody else, I suggest) ; never open the door without seeing to it that nobody is endangered or incon- venienced by it on either road or footpath. I would have put the last much stronger, addressing chiefly to the criminal idiots who fling open the door on the off-side without giving a glance behind them. How often have you not longed to teach them just one sufficient lesson by damaging that door as you pass ? Instead you have to swerve out, thereby possibly endangering yourself and any road-users immediately behind you. In another country, if people drove as carelessly as they do here, the mid-road door would be condemned altogether.

" Overtaking " heads a number of sound if obvious rules, the best of which is "Never accelerate when being over- taken." No. 27 gives the useful information, not generally known, that, subject to any local provisions to the contrary, tramcars may be overtaken on either side. One of the fewpossibly superfluous rules is 29—" Avoid overtaking at a pedestrian crossing." If the crossing is occupied, you are breaking the law and subjecting yourself to its penalties. If it is empty, I see no reason why two cars on it are more dangerous than one.

Among the fmal injunctions to drivers, the best is No. 51— " Make as little noise as you can. . . . Sudden noisy accelera- tion is unnecessary and disturbing." I have underlined unnecessary. Noise is a direct cause of irritation, and irritation is a direct cause of the breaking of Rule 14. Cyclists are reminded that they too have duties towards other road- users and are given some salutary advice, the most important of which is in Rule 66.—" Ride in single file whenever . • • conditions require it, and never more than two abreast" (my italics). They are told to keep a straight course, not to wobble about the road, never to ride close behind fast-moving vehicles and never to hold on to another vehicle. Pedes- trians are let off with only 10 rules, all good, of which the best are "Remember that moving vehicles require time to slow down or stop . . . " and "Never stand in the road at blind corners, where you may not be seen by approaching drivers."

Fifteen million copies of the Code are to be delivved free throughout the Kingdom, one for every third road-user. It