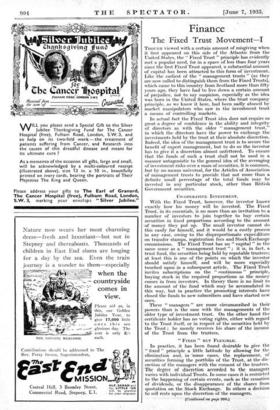 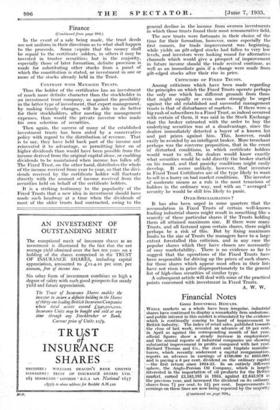 The Fixed Trust Movement—I Motion viewed with a certain amount of misgiving when it first appeared on this side of the Atlantic from the United States, the " Fixed Trust " principle has evidently met a popular need, for in a space of less than four years since the first Fixed Trust appeared, 'a substantial amount of capital has been attracted to this form of investment. Like the earliest of the "management trusts" (as they are now called to distinguish them from the Fixed Trusts), which came to this Country from Scotland more than fifty years ago, they have had to live down a certain amount of prejudice, not to say suspicion, especially as the idea was born in the United States, where the trust company principle, as we know it here, had been sadly abused by market manipulators who saw in the investment trust' a means of controlling markets.

In actual fact the Fixed Trust idea does not require so great a degree of confidence in the ability and integrity of directors as with the older "management trust," , in which the directors have the power to exchange the investments held by the trust at their absolute diScretion. Indeed, the idea of the management trust is to secure the ' benefit of expert management, but to do so the investor has to give it a discretion almost unfettered. To ensure that the funds of such a trust shall not be used in a manner anta.gonistic to the general idea of the averaging of investment risks over a mass of securities, it is common, . but by no means universal, for the Articles of Association of management trusts to provide that not more than a definite small percentage of the total funds may be invested in any particular stock, other than British • Government securities.

• With the Fixed Trust, however, the investor knows exactly how his money will be invested. The Fixed Trust, in its essentials, is no more than an invitation to a number of investors to join together to buy certain securities in fixed proportions according to the amount of money they put up. The small investor cannot do this easily for himself, and it would be a costly process in any case, owing to the disproportionate expenditure on transfer stamps, registration fees and Stock Exchange commissions. The Fixed Trust has no " capital " in the same sense as a "management trust " ; it is, in fact, a trust fund, the securities being held by reputable trustees; at least this is one of the points on which the investor should satisfy himself, and will be more especially touched upon in a subsequent article. The Fixed Trust invites subscriptions on the " continuous " principle, buying stock in the required proportions as the money comes in from investors. In theory there is no limit to the amount of the fund which may be accumulated in this way, but in practice the promoting interests have closed the funds to new subscribers and have started new ones.

These "managers " are more circumscribed in their powers than is the case with the managements of the older type of investment trust. On the other hand the , certificate holder has no voting rights, either with regard to the Trust itself, or in respect of the securities held by the Trust ; he merely receives his share of the income of the Trust from the trustees.

In practice, it has been found desirable to give the " fixed " principle a little latitude by allowing for the elimination and, in some cases, the replacement, of securities forming the portfolio of the Trust, at the dis- cretion of the managers with the consent of the trustees. The degree of discretion accorded to the managers varies with individual Trusts. In some cases it is restricted to the happening of certain events, such as the cessation of dividends, or the disappearance of the shares from quotation on the Stock Exchange. In others a decision to sell rests upon the discretion of the managers.

In the event of a sale being made, the trust deeds are not uniform in their directions as to what shall happen to the proceeds. Some equire that the money shall be repaid to the certificate :lolders, in others it may be invested in trustee sectirities; but in the majority, especially those of later formation, definite provision is made for substituting other stocks from a panel of which the constitution is stated, or investment in one or more of the stocks already held in the Trust.

Thus the holder of the certificates has an investment of much more definite character than the stockholder in an investment trust company, as against the possibility in the latter type of investment, that expert management, by making timely changes, will be able to do better for their stockholders, after meeting the management expenses, than would the private investor who made his own selection of securities.

Then again, the success of many of the established investment trusts has been aided by a conservative policy with regard to the distribution of revenue. That is to say, they have held back part of the income and reinvested it to advantage, so permitting later on of higher dividends than would have been possible from the income derived from the original capital alone, or enabling dividends to be maintained when income has fallen off. The Fixed Trust, on the other hand, distributes the whole of the income received from year to year, so that the divi- dends received by the certificate holder will fluctuate directly with the amount of income received from the securities held on behalf of the certificate holders.

It is a striking testimony to the popularity of the Fixed Trusts that a new idea in investment should have made such headway at a time when the dividends of most of the older trusts had contracted, owing to the general decline in the income frorn. oversea investments in which those trusts found their most remunerative field.

The new trusts were fortun,ate_in their choice, of the time for their 'formation, however, mare especially the first corners, for trade -improvement was , beginning, while yields on gilt-edged stocks had fallen to very low levels, and investors were looking round for alternative channels which would give a prospect of improvement in future income should the trade revival continue, as well as an immediate gain if a change were made from gilt-edged stocks after their rise in price.

Among criticisms which have been made regarding the principles on which the Fixed Trusts operate perhaps the only one which has different grounds from those that might equally or even more strongly be urged against the old established and successful management trusts is that of disturbance of markets. If there were a big rush of subscribers to a Fixed Trust, as indeed occurred with certain of them, it was said in the Stock Exchange that the broker entrusted with the order to buy the underlying securities was at a disadvantage, since the dealers immediately detected a buyer of a known list and put prices against him. This, however, could easily be avoided by an intelligent broker. More trenchant perhaps was the converse proposition, that in the event of disturbed conditions, in which certificate holders would want to sell, the dealers would know exactly what securities would be sold directly the broker started on his round, and that panicky conditions might easily develop. It seems unlikely, however, that investors in Fixed Trust Certificates are of the type likely to want to sell in a hurry on bad market conditions. The investor of moderate means as a rule is the most tenacious of holders in the ordinary way, and with an " averaged " security he would be still less likely to panic.

It has also been urged in some quarters that the accumulation in Fixed Trusts of certain well-known leading industrial shares might result in something like a scarcity of these particular shares if the Trusts holding them all attained maximum size. If there were many Trusts, and all fastened upon certain shares, there might perhaps be a risk of this. But by fixing maximum limits to the size of Trusts the managers have to a large extent forestalled this criticism, and in any case the popular shares which they have chosen are necessarily of easy marketability. There is no evidence so far to suggest that the operations of the Fixed Trusts have been responsible for driving up the prices of such shares, for those shares which appear most often in their lists have not risen in price disproportionately to the general list of high-class securities of similar type.

A subsequent article will deal with some of the practical points concerned with investment in Fixed Trusts. A. W. w.