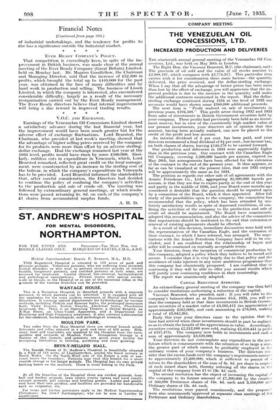 Earnings of the Venezuelan Oil Concessions Limited showed a satisfactory advance during the last financial year, but the improvement would have been much greater but for the adverse effect of exchange fluctuations. Lord Bearsted, the Chairman, who presided at last week's meeting, showed that the advantage of higher selling prices received by the company for its products were more than offset by an adverse sterling- dollar exchange. Had the exchange remained last year at the 1933 level, profits would have risen by some 2580,000. Simi- larly, ruthless cuts in expenditure in Venezuela, which, Lord Bearsted remarked, reflected great credit on the local manage- ment, were counteracted by an increase in the sterling cost of the bolivar, in which the company's expenditure in Venezuela has to be provided. Lord Bearsted informed the shareholders that, after careful consideration, the Directors had decided to continue the policy of confining the company's activities to the production and sale of crude oil. The meeting was followed by extraordinary general meetings, at which resolu- tions were passed returning 6s. 8d. on each of the company's £1 shares from accumulated surplus funds.