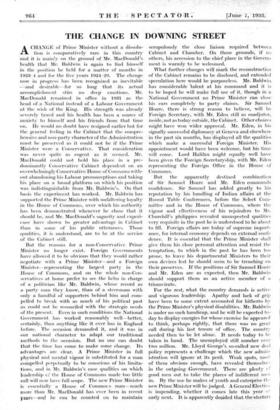 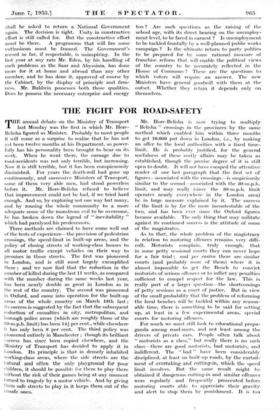 THE CHANGE IN DOWNING STREET

A CHANGE of Prime Minister without a dissolu- tion is comparatively rare in this country and it is mainly on the ground- of Mr. MacDonald's health that Mr. Baldwin is again to find himself in the position he held for a matter of months in 1923-4 and for the five years 1924-29. The change now in progress has been recognized as inevitable -and desirable—for so long- that its• actual accomplishment stirs no deep emotions. Mr. MacDonald remained in office in 1931 as the head of .a National instead of a Labour Government at the wish of the King. His strength was already severely taxed and his health has been a source of anxiety to himself and his friends from that time on. He would no doubt have resigned earlier but for the general feeling in the Cabinet that the compre- hensive and non-party character of the Administration must be preserved as it could not be if the Prime Minister were a Conservative. That consideration was never quite as cogent as it seemed. Mr. MacDonald could not hold his place in a pre- dominantly Conservative Cabinet dependent on an overwhelmingly Conservative House of Commons with- out abandoning his Labour preconceptions and taking his place on a broad platform on which his position was indistinguishable from Mr. Baldwin's. On that basis the experiment has worked. Mr. Baldwin has supported the Prime Minister with unfaltering loyalty' in the House of Commons, over which his authority has been demonstrated whenever he chose that it ` should be, and Mr. MacDonald's sagacity and experi- ence have shown to greater advantage in Cabinet than in some of his public utterances. Those qualities, it is understood, are to be at the service of the Cabinet still.

But the reasons for a non-Conservative Prime Minister no longer exist. Foreign Governments have allowed it to be obViOus that they would rather negotiate with a Prime Minister—and a Foreign Minister—representing the largest party in the House of Commons, and on the whole non-Con- servatives at home prefer to see the helm in charge of a politician like Mr. Baldwin, whose record as a party man they know, than of a steersman with only a handful of supporters behind him and con-i pelled to break with as much of his political past as could not be reconciled with the strategic needs of the present. Even in such conditions the National Government has worked reasonably well—better, certainly, than anything like it ever has in England before. The occasion demanded it, and it was in Our national character to adapt our traditional methods to the occasion. But no one can doubt that the time has come to make some change. Its advantages are clear. A Prime Minister in full physical and mental vigour is substituted for a man compelled perpetually to be conscious of his limita- tions, and in Mr. Baldwin's case qualities on which leadership cf the House of Commons made too little call will now have full scope. The new Prime Minister is essentially a House of Commor s. man—much more than Mr. MacDonald has ever been in recent years—and he can be counted on to maintain- scrupulously the close liaison required' between Cabinet and Chamber. On those grounds, if no others, his accession to the chief place in the Govern- ment is warmly to be welcomed.

What further changes• will Mark the reconstruction of the Cabinet remains to be disclosed, and extended speculation here would be purposeless. Mr. Baldwin has considerable 'talent at his command and it is to be hoped he will make full use of it, though in a National Government no Prime Minister' C-ari -close his ears completely to party claims. Sir Samuel Hoare, there is strong reason to believe, will be Foreign Secretary, with Mr. Eden still as coadjutor, inside, not as today outside, the Cabinet. Other choices might have won wider approval. Mr. Eden; in his signally successful diplomacy at Geneva and elsewhere in the past six months, has displayed all the qualities which make a successful Foreign Minister. His appointment would have been welcome, but his time will come. Lord Halifax might equally well have been given the Foreign Secretaryship, with Mr. Eden representing the Foreign Office in the House' of Commons.

But the apparently destined combination of Sir Samuel Hoare and Mr. Eden comniands confidence. Sir Samuel has added greatly to• his reputation by his handling of Indian affairs at the Round Table Conferences, before the Select Coin- mittee and in the House of Commons, where the vigour and effectiveness of his rejoinders to Mr. Churchill's philippics revealed unsuspected qualities very requisite in the post he is understood to be about to fill. Foreign affairs are today' of supretine import- ance, for internal economy depends on eicternal confi- dence. It is essential that the Prime Minister shall give them his close personal attention and resist the temptation, to which in the past he has been too prone, to leave his departmental Ministers to their own devices lest he should seem to be trenching on their preserves. If the positions of Sir Samuel Hoare and Mr. Eden are as expected, then Mr. Baldwin should support them as an active member- of a triumvirate.

For the rest, what the country demands is active and -vigorous leadership: Apathy and lack of grip have been to Some extent accounted for hitherto by the Prime Minister's physical disabilities. Mr. Baldwin is under no such handicap, -and he will be expected to- day to display energies for whose exercise he appeared to think, perhaps rightly, that there was no 'great call during his last tenure of office. The country needed then 'to 'be let alone. It needs today to be taken in hand. The unemployed still number over two million. - Mr. Lloyd George's. so-called- new deal policy represents a challenge which the new admin- istration' will ignore 'at its peril. Weak spots, most of them obviOus enough, have revealed themselvei in the outgoing: Government. There are plenty of good men out to, take the places of indifferent men in. By thense he makes of youth and enterprise the new Prime Minister will be judged. • A General Election is impending, -whether it comes late this year or early next. It is apparently decided that therelectors shall be asked to return a National Government again. The decision is right Unity in constructive. effort is still called for. But the constructive effort must be there. A programme that will fire some enthusiasm must be framed. The Government's record so far, if respectable, is uninspiring. In the last year at any rate Mr. Eden, by his handling of such problems as the Saar and Abyssinia, has done more for it at home and abroad than any other member, and he has done it, approved of course by the Cabinet, by the display of principle and firm- ness. Mr. Baldwin possesses both those qualities. Does he possess the necessary enterprise and energy too ? Are such questions as the raising of the school age, with its direct bearing on the unemploy- ment level, to be faced in earnest ? Is unemployment to be tackled frontally by a well-planned public works campaign ? Is the ultimate return to party politics to be prepared for by some rational measure of franchise reform that will enable the political views of the country to be accurately reflected in the House of Commons ? These are the questions to which voters will require an answer. The new Ministers have general goodwill with them at the outset. Whether they retain it depends only on themselves.