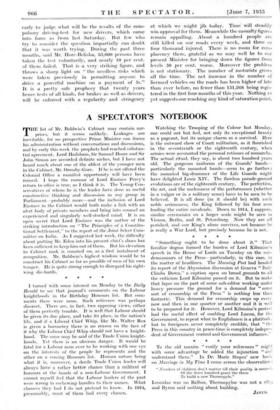 I turned with some interest on Monday to the Daily

Herald to see that journal's comments on the Labour knighthoods in the Birthday Honours list. But com- ments there were none. Such reticence was perhaps discreet. There are, in fact, two opposing views, either of them perfectly tenable. It is well that Labour should be given its due place, and take its place, in the nation's life, and if a Liberal Chief Whip, like Mr. Walter Rea is given a baronetcy there is no reason on the face_ of it why the Labour Chief Whip should not have a knight- hood. The same may be said of the Trade Union knight- hoods. Yet there is an obvious danger. It would be fatal for a Labour man ever to be working with one eye on the interests of the people he represents and the other on a coming Honours list. Human nature being what it is,- moreover, a docile Trade Union leader will always have a rather better chance than a militant of honours at the hands of a non-Labour Government. I cannot myself feel that the Labour leaders of the past were wrong in eschewing handles to their names. What chances they had I do not pretend to know. In 1924, presumably, most of them had every chance.