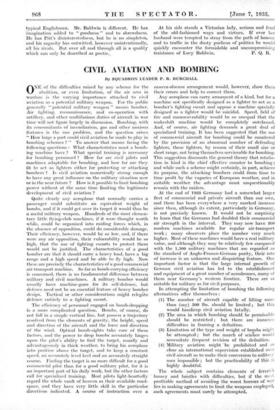 ONE of the difficulties raised by any scheme . for the abolition, or even limitation, of the air arm in warfare is the varying importance attached to civil aviation as a potential military weapon. For the public generally " potential military weapon " means bomber. Air fighting, reconnaissance, and co-operation with artillery, and other multifarious duties of aircraft in war time will not figure largely in discussion. Bombing, with its concomitants of incendiarism, gas and other noxious features is the one problem, and the question arises "How large a part could civil aviation be made to play in bombing schemes ? " To answer that means facing the following questions : What characteristics must a bomb- ing machine have ? What special training is necessary for bombing personnel ? How far are civil pilots and machines adaptable for bombing, and how far are they fit to act as fighters either for protecting or attacking bombers ? Is civil aviation numerically strong enough to have any great influence on the military situation now or in the near future ? How is it possible to limit bombing power without at the same time limiting the legitimate development of civil aviation ?

Quite clearly any aeroplane that normally carries a passenger could substitute an equivalent weight of bombs, and if it could get over its target it would thus be a useful military weapon. Hundreds of the most elemen- tary little flying-club machines, if it were thought worth while, could be organized into raiding forces which, in the absence of opposition, could do; considerable damage. Their efficiency, however, would b4 so low„ and, if there were any air opposition, their vulnerability would. be so high, that the use of fighting escorts to protect them would not be justified. The characteristics of a good bomber are that it should carry a heavy load, have a big range and a high speed and be able to fly high. Now these are precisely the characteristics of a good commercial air-transport machine. So far as bomb-carrying efficiency' is concerned, there is no fundamental difference between military and civil machines. A military bomber would usually have machine-guns for its self-defence, but defence need not be an essential feature of heavy bomber design. Tactical or other considerations might relegate defence entirely to a fighting escort.

The efficiency of personnel engaged on bomb-dropping is a more complicated question. Bombs, of course, do not fall in a simple vertical line, but possess a trajectory resolved from the elements of gravity, the height, speed and direction of the aircraft and the force and direction of the wind. Optical bomb-sights take care of these factors, and the power to drop bombs accurately hinges upon the pilot's ability to find the target, usually and advantageously in thick weather, to bring his aeroplane into position above the target; and to keep a constant speed, an accurately level keel and an accurately straight course. Finding the target is no more difficult for a good commercial pilot than for a good military pilot, for it is an important part of his daily work, but the other factors call for specialized training. Most pilots light-heartedly regard the whole vault of heaven as their available road- space, and they have very little skill in the particular directions indicated. A course of instruction over a camera-obscura arrangement would, however, show them their errors and help to correct them.

Any aeroplane can carry armament of a kind, but for a machine not specifically designed as a fighter to act as a bomber's fighting escort and oppose a machine specially designed as a fighter would be suicidal. Speed, field of fire and manoeuvrability would be so unequal that the makeshift machine would be completely outclassed. And, of course, air fighting demands a great deal of specialized training. It has been suggested that the use of commercial aircraft for bombing could be countered by the provision of an abnormal number of defending fighters, these fighters, by reason of their small size or short range, not being themselves serviceable for bombing. This suggestion discounts the general theory that retalia- tion in kind is the chief effective counter to bombing ; and while such a scheme might certainly, in part, achieve its purpose, the attacking bombers could from time to time profit by the vagaries of European weather, and in suitable weather the advantage must unquestionably remain with the raiders.

At the end of 1933 Germany had a somewhat larger fleet of commercial and private aircraft than our own, and there has been everywhere a very marked increase since then, although its extent, particularly in Germany, is not precisely known. It would not be surprising to learn that the Germans had doubled their commercial air strength in the interval. They may now have 300 modern machines available for regular air-transport work ; many observers place the number very much higher. Most of these machines would have a real military value, and although they may be relatively few compared with the 1,500 military machines that are regarded as the standard of Anglo-Franco-German parity, their rate of increase is an unknown and disquieting feature. One important factor is that the large internal growth of German civil aviation has led to the establishment and equipment of a great number of aerodromes, many of them near Germany's western frontier. These are as suitable for military as for civil purposes.

In attempting the limitation of bombing the following alternatives offer themselves : (1) The number of aircraft capable of lifting more than (say) 500 lbs. should be limited ; but this would handicap civil aviation fatally.

(2) The area in which bombing should be permissible should be restricted ; but, there are immense difficulties in framing a definition.

Limitation of the type and weight of bombs might • be attempted ; but the march of science would necessitate frequent revision of the definition. (4) Military aviation might be prohibited and so close an international supervision established over civil aircraft as to make their conversion to military uses impossible ; but the practicability of this is highly doubtful.

The whole subject contains elements of feverish lunacy and bristles with difficulties, but if the most profitable method of avoiding the worst horrors of war lies in making agreements to limit the weapons employed, such agreements must surely be attempted,