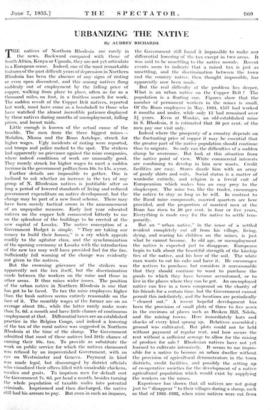 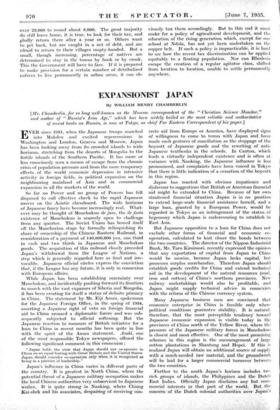 THE natives of Northern Rhodesia are rarely in the news. Backward compared with those of South Africa, Kenya or Uganda, they are not yet articulate in a European sense. Indeed, one of the most remarkable features of the past difficult years of depression in Northern Rhodesia has been the absence of any signs of rioting or even open discontent, and this among natives flung suddenly out of employment by the falling price of copper, walking from place to place, often as -far as a thousand miles, on foot, in a fruitless search for work. The sudden revolt of the Copper Belt natives, reported last week, must have come as a bombshell to those who have watched the almost incredible patience displayed by these natives 'during months of unemployment, falling prices, and locust raids.

Little enough is known of the actual cause of the trouble. The men from the three biggest mines- Mufulira, Nkana and the Roan Antelope, struck for higher wages. Ugly incidents of rioting were reported, and troops and police rushed to the spot. The strikers had apparently no grievance against the mine companies, where indeed conditions of work are unusually good. They merely struck for higher wages to meet a sudden increase in the government polltax from 10s. to 15s. a year.

Further details are impossible to gather. One is inclined to ask whether an increase in the tax of any group of N. Rhodesian natives is justifiable after so long a period of lowered standards of living and reduced government expenditure on native development, but the change may be part of a new fiscal scheme. There may have been merely tactical errors in the announcement of an unpopular measure. Early last year educated natives on the copper belt commented bitterly to me on the splendour of the buildings to be erected at the new capital of Lusaka. The native conception of a Government Budget is simple. "They are taking our money to build their houses," is a cry which appeals readily to the agitator class, and the synchronization of opening ceremony at Lusaka with the introduction of the new tax may well have provided fuel for the fire. Sufficiently full warning of the change was evidently not given to the natives.

But the crowning grievance of the strikers was apparently not the tax itself, but the discrimination made between the workers on the mine and those in other areas. It thus raises wider issues. The position of the urban native in Northern Rhodesia is one that has got to be faced. To tax the mine employees higher than the bush natives seems entirely reasonable on the face of it. The monthly wages of the former are on an average about 23s., while the latter rarely make more than 7s. 6d. a month and have little chance of continuous employment at that. Differential taxes are an established practice in the Belgian Congo, and indeed a lowering of the tax of the rural native was suggested in Northern Rhodesia at the time of the slump. The Government admitted that most of these natives had little chance of earning their 10s. tax. To provide as substitute the work on public service for which the natives clamoured was refused by an impoverished Government, with an eye on Westminster and Geneva. Papnent in kind was made legal, but discouraged by district officials who visualized their offices filled with unsaleable chickens, inealies and goats. To imprison men for default cost the Government 7s. 6d. per head a month, besides turning the whole population of taxable males into potential criminals. Imprisoned and then discharged, the native still had his arrears to pay. But even in such an impasse, the Government still found it impossible to make any differential lowering of the tax except in two areas. It was said to be unsettling to the native morale. Recent events seem to indicate that a raised tax is just as unsettling, and the discrimination between the town and the country native, then thought impossible, has apparently now been made.

But the real difficulty of the problem lies deeper. What is an urban native on the Copper Belt ? The population is a floating one. Figures show that the number of permanent workers in the mines is small. Of the Roan employees in May, 1934, 1557 had worked 6 months and under, while only 15 had remained over 5/ years. Even at Wankie, an old-established mine in S. Rhodesia, it is estimated that 50 per cent. of the men pay one visit only.

Indeed where the prosperity of a country depends on the fluctuating price of copper it may be essential that the greater part of the native population should continue thus to migrate. So only can the difficulties of a sudden slump be overcome. But look at this situation from the native point of view. White commercial interests are combining to develop in him new wants. Credit facilities are easy. Stores dazzle him with an array Of gaudy shirts and suits. Social status is a matter of wardrobe entirely, and religion is a fervid cult of Europeanism which makes him an easy prey to the shopkeeper. The mine too, like the trader, encourages the native to stay as long as he will. In contrast to the Rand mine compounds, married quarters are here provided, and the proportion of married men at the Roan has risen to 50 per cent, in four or five years. Everything is made easy for the native to settle tem- porarily.

But an " urban native," in the sense of a settled resident completely cut off from his village, living, dying, and rearing his children on the mines, is just what he cannot become. In old age, or unemployment the native is expected just to disappear. Europeans begin to talk about the beautiful strength of the kinship ties of the native, and his love of the soil. The white man wants to eat his cake and have it. He encourages the natives to purchase, but considers it unreasonable that they should continue to want to purchase the goods to which they have become accustomed, or to live in the places where they can be got. An unemployed native can live in a town compound on the charity of his friends for a certain time, but the Government cannot Permit this indefinitely, and the locations are periodically "cleared out." A recent hopeful development has been the provision of small plots of three to five acres in the environs of places such as Broken -Hill, Ndola, and the mining towns. Here immediately huts and shacks of every kind sprang up. Relatives assembled ; ground was cultivated. But plots could not be held without payment of regular rent, and how secure the rent without a sufficient acreage to allow for the raising of produce for sale ? Rhodesian natives have not yet learned to cultivate intensively. It seems to me impos- sible for a native to become an urban dweller without the provision of agricultural demonstrators in the town districts, credit facilities, and possibly the setting up of co-operative societies for the development of a native agricultural population which would exist by supplying the workers on the mines.

Experience has !shown that all natives are not going just to" disappear "to their villages during a slump, such as that of 1931-1932, when mine natives were cut from over 23,000 to round about 8,000. The great majority do still leave home, it is true, to look for their tax, and gladly return there after a year or so. Others want to get back, but are caught in a net of debt, and are afraid to return to their villages empty-handed. But a small, though increasing, percentage of natives are determined to stay in the towns by hook or by crook. This the Government will have to face. If it is prepared to make provision for a certain number of detribalized natives to live permanently in urban areas, it can ob- viously tax them accordingly. But to this end it Must Make for a policy of agricultural development, and the education of the rising generation which, except for one school at Ndola, has not yet been undertaken On the copper belt. If such a policy is impracticable, it is hard to see how the recent tax discrimination can be applied equitably to a floating population. Nor can Rhodesia escape the creation of a regular agitator class, shifted from location to location, unable to Settle Permanently anywhere.