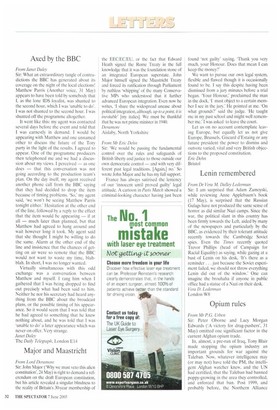 Sir: I am surprised that Adam Zamoyski, while reviewing Anne Applebaum's book (17 May), is surprised that the Russian Gulags have not produced the same sense of horror as did similar Nazi camps. Since the war, the political slant in this country has been firmly towards the Left, aided by many of the newspapers and particularly by the BBC, as evidenced by their tolerant attitude recently towards the Cambridge Soviet spies. Even the Times recently quoted Trevor Phillips (head of Campaign for Racial Equality) as saying, while gazing at a bust of Lenin on his desk, 'It's there as a reminder. . . just because the Soviet experiment failed, we should not throw everything Lenin did out of the window.' One can imagine the brouhaha if anyone in public office had a statue of a Nazi on their desk. Vera D. Lederman