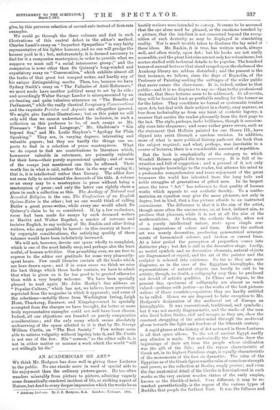 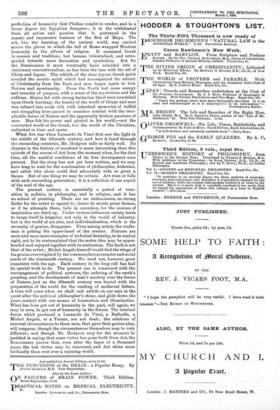 AN ACADEMICIAN ON ART.* WE think Mr. Hodgson has done

well in giving these Lectures to the public. No one stands more in need of special aids to his enjoyment than the ordinary picture-gazer. He too often wanders miserably from picture to picture, admiring vaguely some dramatically-rendered incident of life, or striking aspect of Nature,but dead to every deeper impression which the works he so hastily reviews were intended to convey. It seems to be assumed that the eye alone need be pleased, or the emotions touched by a picture, that the intellect is not concerned beyond the recognition of such dexterity as may be displayed in simulating reality. Nor is much trouble taken to disabuse the lay mind of these ideas. Mr. Ruskin, it is true, has written much, always well, and often wisely, upon Art ; but his books are not easily accessible, and the great histories are not only too voluminous, but are too stuffed with technical details to be popular. The hundred tomes-of annual lectures that stand ranged upon the shelves of the Academy library are seldom disturbed ; and the present is the first instance, we believe, since the days of Reynolds, of the Professor of Painting seeking the suffrages of the wider public that never enters the class-room. It is, indeed, rather to that public—and it is no dispraise to say so—than to the professional student, that these lectures seem to be addressed. At all events, they will be found at least as profitable reading for the former as for the latter. They constitute no formal or systematic treatise upon Art, but deal with their subject in a chatty, easy manner, as free from technicality as from any taint of a3sthetic bigotry, a manner that carries the reader pleasantly from the first page to the last. The style, perhaps, lacks brilliance, though it occasionally rises into eloquence; and some rather grave errors, such as the statement that Holbein painted for our Henry III., have slipped into print through a careless revision. In addition, more of what is mere political history pads-out the book than the subject required; and what, perhaps, was inevitable in a course of lectures, there is a considerable amount of repetition.

But the book is emphatically of the category to which Wendell Holmes applied the term marrowy. It is full of instruction and full of suggestion ; and a perusal of it not only brings ampler knowledge to the reader, but attunes his mind to a profounder comprehension and truer enjoyment of the great treasures the world has inherited from the long toils and noble struggles of generations of gifted men. In its largest sense the term " Art " has reference to that quality of human works which appeals to our wsthetic faculty. To a mathematician an equation may give the same pleasure, not only in degree, but in kind, that a fine picture affords to an instructed connoisseur. The difference is that it is the aim of the artist, though more often the unconscious, or, at least, indirect aim, to produce that pleasure, while it is not at all the aim of the mathematician. At bottom, the msthetic faculty, when not of a purely intellectual nature, rests upon simple sensuous impressions of colour and form. Hence the earliest art was merely decorative, producing symmetrical arrangements of harmonised colours, and broken or curved lines. At a later period the perception of proportion comes into distincter play ; but Art is still in the decorative stage. Lastly, as useful symbols and as decorative elements, natural objects are diagrammed or copied, and the art of the painter and the sculptor is ushered into existence. So far as they are mere diagrams, as in the case of the Egyptian hieroglyphs, the representations of natural objects can hardly be said to be artistic, though, no doubt, a calligraphy may thus be produced not devoid of artistic qualities. In China and Japan, to the present day, specimens of calligraphy are almost as much valued—perhaps with justice—as the works of the best picturewriters of those countries,—painters they are hardly entitled to be called. Hence we are disposed to take exception to Mr. Hodgson's designation of the mediteval art of Europe as hieroglyphic. It was conventional, traditional, and symbolic ; but it was not merely diagrammatic, and the works of the men who lived before Giotto, stiff and meagre as they are, show the constant struggling of the artist-mind through the medimval gloom towards the light and freedom of the fifteenth century.

A rapid glance at the history of Art as traced in these Lectures is all that space allows. To the art of ancient Egypt nardly any allusion is made. Yet undoubtedly the Greeks drew the beginnings of their art from the people whose civilisation was the gift of the Nile ; and the repose characteristic of Greek art, in its highest Periclean stage, is equally characteristic of the monuments of the first six dynasties. The calm of the Egyptian as of the Greek figure was the calm of conscious strength and power, as the collection at Boulaq amply proves ; and even the fine anatomical detail of the Greeks is foreshadowed in such works as the very ancient wooden statue of the early empire, known as the Sheikh-el-beled. Very different, it may be remarked parenthetically, is the repose of the various types of Buddha that people the farthest East. It was the fullness and perfection of humanity that Phidias sought to render, and in a lesser degree his Egyptian foregoers ; it is the withdrawal from all action and passion that is portrayed in the mystic and impressive features of the Son of Maya. The art, like the learning, of the ancient world, was carried across the gloom in which the fall of Rome wrapped Western humanity by the efforts of religion. It remained Greek in essence and tradition ; bat became Orientalised, and retrograded towards mere decoration and symbolism. But for the Renaissance it must eventually have subsided into a stationary conventionalism, as has been the case with the art of China and Japan. The rebirth of the clear joyous Greek spirit assailed the ascetic spirit which had accompanied the advent of Christianity from the East, and man began again to love Nature and spontaneity. From the North had come energy and tenacity of purpose, with a sense of the mysterious and the sublime. Brains fed with strong barbarian blood were nourished upon Greek learning; the beauty of the world of things and men was infused into souls rich with inherited memories of toilful and struggling lives passed in ceaseless combat with the inexplicable forces of Nature and the apparently lawless passions of men. Man felt his power and gloried in his world,—not the contracted world of the Greek, but the world of the Christian, unlimited in time and space.

What Art was when Leonardo da Vinci first saw the light in the middle of the fifteenth century, and how it fared through the succeeding centuries, Mr. Hodgson tells us fairly well. No chapter in the history of mankind is more interesting than this episode of the course of Art from the moment when, for the first time, all the needful conditions of its free development were present. But the story has not yet been written, and we may have long to wait for the combination of philosopher, historian, and artist who alone could deal adequately with so great a theme. But of one thing we may be certain. Art rises or falls with each succeeding generation ; it is a reflection of one aspect of the soul of the age.

The present century is essentially a period of transition in politics, in philosophy, and in religion, and it has no school of painting. There are no enthusiasms, no strong faiths for the artist to appeal to ; hence he avoids great themes, or if he attempts them, fails in execution, for the sources of inspiration are dried up. Under various influences society tends to range itself in brigades, not only in the world of industry, but in the world of art also, and individualisation, which is the necessity of genius, disappears. Even among artists the craftsman is getting the upper-hand of the creator. Pictures are more and more mere examples of technical dexterity, to be read at sight, not to be contemplated that the motor idea may be apprehended and enjoyed together with its realisation. The fault is not that of the artist ; Michel Angelo himself would find the wings of his genius overweighted by the commonplace accuracies and social needs of the nineteenth century. We need not, however, grow impatient with the age. Each century in the long roll has had its special work to do. The present one is concerned with the rearrangement of political systems, the ordering of the earth's peopling, and the development of man's mastery over the forces of Nature, just as the fifteenth century was busied with the preparation of the world for the rending of mediaeval fetters. A time will come when we shall rest awhile on our oars in the quest after the political philosopher's stone, and glide down the years content with our means of locomotion and illumination. What has been got out of humanity in the past, will again, we may be sure, be got out of humanity in the future. The internal forces which produced a Leonardo da Vinci, a Raffaelle, a Michel Angelo, or a Turner, are not dead ; the relations of external circumstances to these men, that gave their genius play, will reappear, though the circumstances themselves may be very different ; and though Mr. Hodgson may for the moment be justified in saying that some virtue has gone forth from Art, the Renaissance proves that, even after the lapse of a thousand years, the lost virtue may be recovered, and Art shine more brilliantly than ever over a rejoicing world.