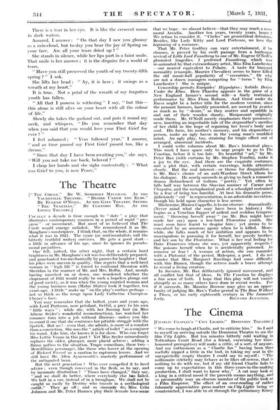 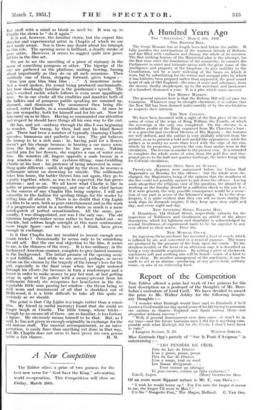 [Cit_\RLIE Ch APLIN'S " CITY LIGHTS." DOMINION THEATRE.] " WE come to laugh at Charlie, not to criticize him." So I said to myself on arriving outside the Dominion Theatre to see the film City Lights. But ten minutes bitterly cold waiting in Tottenham Court Road (for a friend, exercising her time- honoured prerogative) will make a critic, of a sort, of anyone. And my enthusiasm as a " Charlie fan " having been thus usefully nipped a little in the bud, in taking my seat in the unexpectedly empty theatre I could say to myself : " The millionaire celebrity may behave as he likes off-screen, that is nothing to do with me, but if my old friend Charlie fails to come up to expectations in this three-years-in-the-making production, I shall want -to know why." A cat may look at a king in a critical mood if the proverb means anything, and so presumably may an obscure member of the public look at a Film Emperor. The effect of an over-reading of rather fulsomely appreciative press matter on City Lights being so counteracted, I was able to sit through the preliminary Krazy lila stuff with a mind as blank as need be. It was up to Charlie the clown to " do it again."

It is not, however, the familiar clown, but the expert film director and experimental artist in Chaplin of which we .are first made aware. Nor is there any doubt about his triumph in this role. The opening scene is brilliant, a deadly stroke of pure satire. Moreover, it seems to suggest quite new possi- bilities in the film art.

We are to see the unveiling of a piece of statuary in the name of something pompous or other. The bigwigs of the city are gathered on the platform, smiling, bowing, fussing about importantly as they do on all such occasions. Then suddenly one of them, stepping forward, gives tongue

Qua qua qua blaa blaa blaa . . ." A monstrous noise. Not a word spoken, the sound being produced mechanically, but how shockingly familiar is the gentleman's speech.- The lady's excited cackle which follows is even more appallingly true. So in one stroke all the crudities and inanities both of the talkies and of pompous public speaking are summed up, damned, and dismissed. The monument then being dis- missed, enter Charlie, in a scandalous situation. At once he has our sympathy, both for himself and for his art. Now let him carry on as he likes. Having so commanded our attention and respect he should have things all his own way to the end.

He has, and yet—midway through the film I was beginning to wonder. The tramp, by then, had met his blind flower Ali. There had been a number of typically charming Charlie episodes, humorous and pathetic in turn. The girl believes the tramp to be -a rich man : he, having paid for a flower, doesn't get his change because, in hearing a car move away from the kerb, she assumes he has gone away. Taking careful aim for her flowers, she empties a can of water over him. He wanders off, lingers opposite a nude bronze in a shop window—this is the eyebrow-lifting, cane-twiddling Charlie at his best : his pretence of being interested in some- thing quite different—until, at night by the river, he rescues a millionaire intent on drowning by suicide. The millionaire takes him home, the butler throws him out again, they go to a party together, where, as was to be expected, the fun grows hilarious : and so on We all know what Charlie is like in polite or pseudo-polite company, and one of the chief factors in the success of any Chaplin film being surprise, I will not subscribe to the fashion for spoiling things for the reader by telling him all about it. There is no doubt that City Lights k a film to be seen, both as pure entertainment and as the work of a progressive artist in a medium where so much is a mere botch-potch of potted sensationalism. All the same, per- sonally, I was disappointed, nor was I the only one. The old hilarious laughter-maker seems rather to have faded out—we chuckle, but seldom laugh outright at this more sentimental, more tragic figure—and we have not, I think, been given enough in exchange.

Is it that Chaplin has not troubled to invent enough new comic tricks ? Occasionally he seems only to be mimicking his old self. But the one real objection to the film, it seems to me, is the thinness of the story. It is too ordinary, in the hackneyed American manner, complete to grey-haired mammy in the background. The initial promise of the opening scene is not fulfilled. And while we are moved, perhaps, as never before on the cinema by the tragedy of the tramp's love for the girl, especially in the final scene when, her sight restored through his efforts (he becomes in turn a roadsweeper and a boxer in order to make money to pay her rent, at last, getting away in spite of the police with a money-present from his millionaire friend) she recognizes her benefactor in the dis- reputable little man passing her window—the theme being so well worn and reminiscent of all that is shoddiest out of Hollywood, it is a little difficult " to take all this quite as seriously as we should.

The point is that City Lights is a tragic rather than a comic film. My friend (a useful mercury) found that she could no longer laugh at Charlie. The little tramp, whose tricks— though by no means all of them—are so familiar, is too forlorn a figure. He obviously means himself to be that. But, as I said, he has not given us enough originality in exchange for the old riotous stuff. The musical accompaniment, as an inter- pretation, is easily finer than anything yet done in that way, but Mr. Chaplin does not seem to have given his own genius