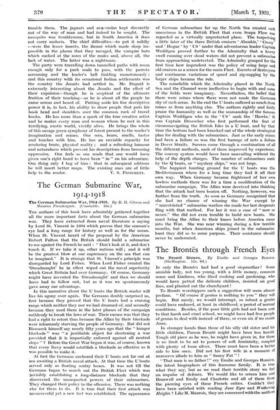 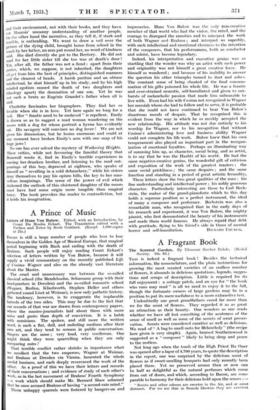 Page 38, 7 March 1931 — The Brontes through French Eyes The Brontë' Sisters. By Emilie
Close

The Brontes through French Eyes The Brontë' Sisters. By Emilie

IF only the Brontës had had a good stepinother ! Some amiable lady, not too young, with a little money, common sense and kindness, who liked cooking and gardening, who would have petted the delicate children, insisted on good fires, and planted out the churchyard !

To Bronte worshippers such a suggestion will seem almost profane. " Of course if genius is nothing to you " they will begin. But surely, we would interrupt, so robust a genius could have endured, at least in childhood, a period of normal conditions. Besides, if the poor little girls had not been sent to that harsh and cruel school, we might have had five people Of genius to deal with instead of three, or even six if we count Anne.

In stronger hands than those of his silly old sister and his little children, Parson Bronte might have been less horrid. Tough old piece as he was, he might have given in, for there is no limit to be set to powers of soft femininity, coupled with plenty of loose silver. There must have been a better side to him once. Did not his first wife in a moment of unreserve allude to him as " Saucy Pat " !

"That man is no father I" cry Emilie and Georges Romieu, the latest biographers of this fearsome family. It is true what they say; but as we read their terrible story we feel an impulse of defene'e. We would like to screen him and Branwell and Emily and Charlotte and all of them from 'the piercing eyes of these French critics. Couldn't- they have been satisfied with reading Jane Eyre - and .Wutheriag Heights ? Like M. Maurois, they are concerned with the authors and their environment, not with their books, and they have pot Maurois' uncanny understanding of another people. On the other hand the narrative, as they tell it, if stark and terrible, is enthralling. We want to draw a veil over the picture of the dying child, brought home from school in the coach by her father, no arm put round her, no word of kindness said. She died directly she got to the Rectory. He did not send for her little sister till she too was at death's door ! Yet, after all, the father was not a fiend : apart from their genius, which, we suppose, is not inherited, the daughters all got from him the best of principles, distinguished manners and the clearest of heads. A harsh puritan and an obtuse intellectual, he shut himself up in his study, and by his high minded egotism caused the death of two daughters and (theology apart) the damnation of one son. Yet he was not such a brute as Eugenie Grandet's father when all is said.

Charlotte fascinates her biographers. They find her so lovable when she is in love. Yet here again we long for a veil. Her " frantic need to be enslaved " is repellent. Emily is drawn so as to suggest a mad woman wandering on the moors with a dog for whose portrait a hyena has evidently sat. His savagery will convince no dog lover ! We are not given his dimensions, but he looms enormous and could at any moment have broken Emily's arm with one snap of his huge jaws !

No one has ever solved the mystery of Wuthering Heights. These critics, while not favouring the fanciful theory that Branwell wrote it, find in Emily's terrible experiences in nursing her drunken brother, and listening to the mad out- pourings of this boy, depraved at eighteen, who speaks of himself as " revelling in a cold debauchery," while his sisters deny themselves to pay his opium bills, the key to her mar- vellous imaginings. The sense of the power of evil which darkened the outlook of this cloistered daughter of the moors must have had some origin more tangible than magical fancy. The book provokes the reader to contradiction, but It holds his imagination.