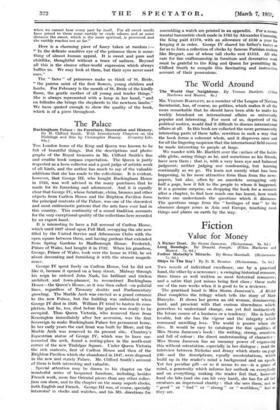 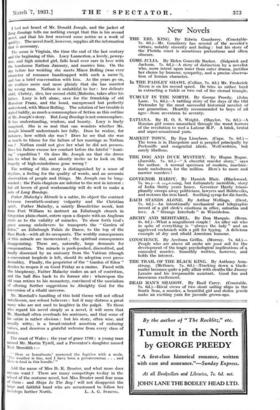 Ships In The Bay ! By D. K. Broster. (Heinemann. 7s. 6d.) Two novels of individual excellence, one by a practised hand, the other by a newcomer ; a swinging historical romance, three times as well written as most historical romances ; and a satire that just misses being first class ; these make one of the rare weeks when it is good to be a reviewer.

The practised hand is Miss Storm Jameson's. A Richer Dust completes the trilogy which tells the story of Mary Hansyke. It shows her grown an old woman, domineering, hard, and prescient with that curious shrewdness which, powerless to understand change, can yet feel instinctively the future course of a business or a tendency. She is hardly lovable, but she has the vigour and the integrity which command unwilling love. The world is poorer when she dies. It would be easy to catalogue the fine qualities of Miss Storm Jameson's book : the writing, strong, sensitive, and full of colour : the direct understanding of character— Miss Storm Jameson has an uncanny power of expressing this without ostentation, especially in her dialogue ; read the interview between Nicholas and Jenny which starts on page 250—and the descriptions, equally unostentatious, which build up in the reader's mind a background and an epoch. Yet her peculiar gift—or so it seems to me—is a grace of mind, a generosity which informs her outlook on everybodY and on everything, making the reader feel that, however hard she hits (and she can hit very hard), she has for all her creatures an impersonal charity : that she sees them; not as " good " or had " or " strong " or worthless," but as they are. I had not heard of Mr. Donald Joseph, and the jacket of Long Bondage tells me nothing except that this is his second novel, and that his first received some notice as a work of quality. The novel itself, however, supplies all the information that is necessary.

The scene is Virginia, the time the end of the last century and the beginning of this. Lucy Lannerton, a lovely, percep- tive, and high minded girl, falls head over ears in love with the handsome Nathan January, and marries him. On the day before her wedding she meets Minor Bolling (was ever character of romance handicapped with such a name ?), and has a brief conversation with him. As the years go on, she realizes more and more plainly that she has married the wrong man. Nathan is unfaithful to her : her ,delicate child, Christy, dies, her second child4Malcolm, takes after his father. Lucy is left alone, save for the friendship of old Monsieur Franz, and the bond, unexpressed but perfectly understood, with Minor Bolling. The solution of her trouble is stated baldly, as much a commonplace of fiction as this outline of Mr. Joseph's story. But Long Bondage is not commonplace. It has understanding, wisdom, and beauty. Lucy is finely imagined, She is so real that one wonders whether Mr. Joseph himself understands her fully. Does he realize, for instance, how selfish she was ? Does he see that she was as much to blame for the failure of her marriage as Nathan was ? Nathan could not give her what he did not possess. noes his failure excuse her conduct before the fateful " hunt- ing" expedition ? Or does Mr. Joseph see that she drove him to what he did, and silently invite us to look on the tragedy of high-mindedness gone wrong ?

The writing of this story is distinguished by a sense of rhythm, a feeling for the quality of words, and an accurate observation of people and things. Mr. Joseph can be long- winded : the Paris chapters are inferior to the rest in interest : but all lovers of good workmanship will do well to make a note of Long Bondage.

Father Malachy's Miracle is a satire, its object the contrast between twentieth-century vulgarity and the Christian spirit. Father Malachy, a saintly Benedictine monk, lent from Fort William to instruct an Edinburgh church in Gregorian plain-chant, enters upon a dispute with an Anglican cleric as to the validity of miracles. To show forth God's grace among unbelievers he transports the " Garden of Eden," an Edinburgh Palais de Dense, to the top of the Bass Rock—with all its occupants. The worldly consequences of this miracle are inconvenient ; the spiritual consequences disappointing. There are, naturally, large demands for compensation. The miracle is pooh-poohed, discredited, and finally disowned by an emissary from the Vatican (though a convenient loophole is left, should its adoption ever prove desirable).. Finally, the proprietor of the " Garden of Eden " decides to reopen it on Good Friday as a casino. Faced with this blasphemy, Father Malachy makes an act of contrition, and the hall flies back to its former site : whereupon the old man retires to his monastery, convinced of the unwisdom of offering further suggestions to Almighty God for the conversion of a ribald universe.

Mr. Marshall's handling of this bold theme will not offend unbelievers, nor robust believers : but it may distress a great many who are not used to laughter in the pulpit. To those who regard his novel simply as a novel, it will seem that Mr. Marshall often overloads his sentences, and that some of his satire is rather obvious : but his story, often wise, and usually witty, is a broad-minded assertion of enduring values, and deserves a grateful welcome from every class of reader.

The coast of Wales ; the year of grace 1796 ; a young man named Mr. Martin Tyrell, and a Precentor's daughter named Nest Meredith :— " ' Here or hereabouts,' answered the fugitive with a smile. ' The weather is fine, and I have been a privateenunau . . and

there is food in this bundle.' " Add the name of Miss D. K. Broster, and what more does anyone want? There are many, competitqrs to-day in the school of the costume novel, but Miss Broster need fear none Of them : and Ships In The Bay ! will not disappoint the large and faithful band who .are accustomed to follow her