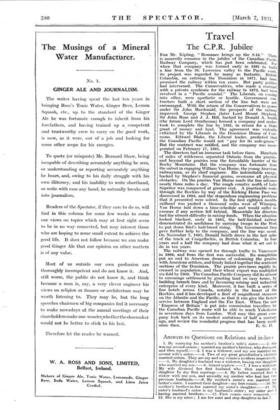 Page 48, 7 March 1931 — Answers to Questions on Relations and in-laws I. By marrying
Close

Answers to Questions on Relations and in-laws I. By marrying

his mother's brother's wife's sister.-2. She was my second-cousin ; married my mother's brother, who deceased. and -then myself.-3. I was a widower, and my son married my second wife's sister.-4. Two of my great grandfather's children married sisters. They are my and my-cousin's mothers respectively. —5. My daughter's husband was a widower, heating one daughter who married my Grand-nephew.-7. I was a widower. My wife divorced her first husband who " then married my daughter by My -first marriage.-8. My father married fast s widow-with one son, and secondly my mother who had - lost two previous husbands.-9. My mother's sister's son married my father's sister. I married their daughter—my first cousin.-10. mother's brother-in-law married my sister's daughter.-11. MY sister's husband's sister is my husband's sister ; my sister and having married brothers.-12. First cousin once removed. 13. .She is my niece ; I am her aunt and step-daughter-in-law !