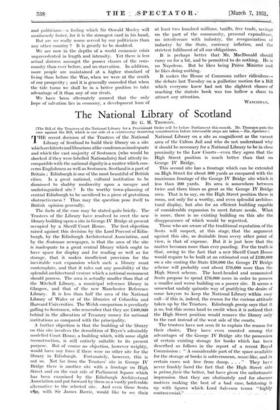 The National Library of Scotland

[The Bill of the Trustees of the National Library for a Provisional Order will be before Parliament this month. Mr. Thermion puts the ease against the Bill, which is one side of a controversy deserving consideration before irrevocable steps are taken.—En. Spectator.] THE recent decision of the Trustees of the National Library of Scotland to build their library on a site which architects and librarians alike condemn as inadequate and which the vast majority of Scotsmen (who would be shocked if they were labelled Nationalists) find utterly in compatible with the national dignityis a matter which con- cerns Englishmen as well as Scotsmen. Scotland is a part of Britain ; Edinburgh is one of the most beautiful of British cities. Is a great national, cultural institution to • be dismissed to shabby mediocrity upon a meagre and undistinguished site ? Is the worthy town-planning of central Edinburgh to be sacrificed to a piece of gratuitous obstructiveness ? Thus may the question pose itself to British opinion generally.

The facts of.the case may be stated quite briefly. The Trustees of the .Library have resolved to erect the new library building upon a site in George IV Bridge at present occupied by it Sheriff Court Rouse. The first objection raised against. this decision by the Lord Provost of Ediia- burgh, by the Edinburgh Architectural Association, and by the Scotsman newspaper, is that the area of the site is inadequate to a great central library which ought to have space for display and for reading as well as for storage, that it makes insufficient provision for the inevitable vast expansion which such a library must contemplate, and that it rules out any possibility of the splendid architectural vesture which a national-monument should possess. The area is actually smaller than that of the Mitchell Library, a municipal reference library in Glasgow, and that of the new Manchester Reference Library. It is less than half the area of the National Library of Wales or of the libraries of Columbia and Harvard Universities. The Welsh comparison is peculiarly- galling to Scotsmen, who remember that they are £400,000 behind in the allocation of Treasury money for national institutions as compared with the principality.

A further objection is that the building of the library on this site involves the demolition of Bryce's admirably modelled Court House, a building which, with some slight reconstruction, is still entirely suitable to its present purpose. But of course no objection, however weighty, would have any force if there were no other site for the library in Edinburgh. Fortunately, however, this is' not so. Not far from the Trustees' site in George IV Bridge there is another site with a frontage on High Street and on the east side of Parliament Square which has been examined by the Edinburgh Architectural Association and put forward by them as a vastly preferable alternative to the selected site. And even. those Scots. who, with Sir James Barrie, would like to see then? National Library on a site as magnificent as the vacant area of the Calton Jail and who do not understand why it should be necessary for a National Library to be in close proximity to the Law Courts—even they agree that the High Street position is much better than that on George IV Bridge.

This second site has a frontage which can be extended on High Street for about 300 yards as compared with the maximum frontage of the George IV Bridge site which is less than 200 yards. Its area is somewhere between twice and three times as great as the George IV Bridge area. That is to say, on the High Street position there is room, not only for a worthy, and even splendid architec- tural display, but also for an efficient building capable of considerable expansion to meet future needs. What is more, there is no existing building on ' this site the disappearance of which would be regretted.

Those who are aware of the traditional reputation of the Scots will suspect, at this stage,' that the argument against this site, so desirable from every other point of view, is that of expense. But it is just here that the matter becomes more than ever puzzling. For the truth is that, owing to the fact that a new Sheriff Court House would require to be built at an estimated cost of £130,000 on a site costing the State £50,000 the George IV Bridge scheme will probably cost about £70,000 more than the High . Street scheme. . The hard-headed and economical Scots propose to spend £70,000 more in order to possess a smaller and worse building on a poorer site. It seems a somewhat unduly quixotic way of gratifying the desire of some lawyers to keep the National Library within easy call—if this is, indeed, the reason for the curious attitude taken up by the Trustees. Edinburgh gossip says that it is so, but this seems hard to credit when it is noticed that the High -Street position would remove the library only to the east instead of the west side of the courts.

The trustees have not seen fit to explain the reason for their choice, They have - even counted among the advantages of the George IV Bridge site the possession of certain existing storage for books which -has been described as follows in- the report of a recent Royal Commission " A- considerable part of the space available for the storage of books is subterranean,. maze-like, and in certain cases - not free - from damp. . . " They -have never frankly faced the fact that the- High Street side is prima fade the better, but have given the unfortunate impression that they are obstinately and for obscure motives -making the- best -of- a -bad - case, bolstering it up with figures which Lord Salvesen terms "highly controversial:" - - _ - - - - - - -