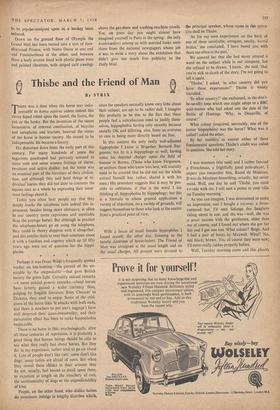 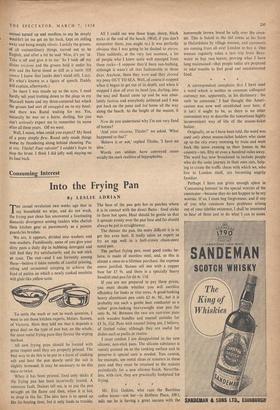 Thisbe and the Friend of Man

By STRIX THERE was a time when the horse was indis- pensable to homo sapiens unless indeed this clever biped relied upon the camel, the llama, the Yak or the husky. But the invention of the steam locomotive, of internal combustion, of bicycles and aeroplanes and tractors, lowered the status of the horse in human society. He ceased to be indispensable. He became a luxury.

His demotion dates from the early part of this century. For many hundreds of years the sagacious quadruped had privately aroused in some men and some women feelings of alarm, revulsion and active dislike; but the horse was an essential part of the furniture of their civilisa- tion, and although they said hard things of in- dividual horses they did not dare to contemn the equine race as a whole by expressing their inner- most feelings about it.

Today you often hear people say that they simply loathe the telephone (and indeed this in- strument, besides being more obtrusive, is often in our country more capricious and unreliable than the average horse). But although in practice the telephone-haters go on using the telephone, they could in theory dispense with it altogether; and this entitles them to vent their emotions about it with a freedom and cogency which up till fifty years ago were out of question for the hippo- phobe.

Perhaps it was Oscar Wilde's frequently quoted verdict on fox-hunting----`the pursuit of the un- eatable by the unspeakable'—that gave British society the green light. Certainly unkind remarks —I mean unkind generic remarks—about horses have latterly gained a wider currency than, judging by English literature from Chaucer to Dickens, they used to enjoy. Some of the criti- cisms of the horse (like 'It attacks with both ends, and there is nowhere to put one's luggage') have well deserved their quasi-immortality; and their cumulative effect has been to make hippophobia respectable.

There is no harm in this; psychologically, after all these centuries of repression, it is probably a good thing that human beings should be able to say what they really feel about horses. But they do, in my experience, rather tend to go on about it. Lots of people don't like cats; some don't like dogs; many ladies are afraid of cows. But when they reveal these chinks in their armour they do not, usually, feel bound to dwell upon them, to expatiate at length on the treachery of cats, the sentimentality of dogs or the unpredictability of kine.

People, on the other hand, who dislike horses do sometimes indulge in lengthy diatribes which, since the speakers normally know very little about their subject, are apt to be rather dull. I imagine this prolixity to be due to the fact that these people feel a subconscious need to justify them- selves, hippophobia having only recently become socially OK and differing, also, from an aversion to cats in being more directly based on fear.

In this context the only really well-adjusted hippophobe I know is Brigadier Bernard Fer- gusson; but he is a hippophage as well, having eaten his detested charger upon the field of honour in Burma. (Those who know Fergusson, or anyhow those who know him best, will scarcely need to be assured that he did not eat the whole animal himself but, rather, shared it with his men.) His precedent suggests that it may be pos- sible to sublimate, if that is the word I am thinking of, hippophobia by hippophagy; but this is a formula to whose general application a variety of objections, on a variety of grounds, will suggest themselves to those who look at the matter from a practical point of view.

With a brace of small female hippophiles I found myself, the other day, listening to the heretic doctrines of horse-haters. The Friend of Man was arraigned at the usual length and on the usual charges. All present were devoted to the principal speaker, whose name in this narra- tive shall be Thisbe.

`As for my own experiences on the back of one of these unreliable, arrogant, smelly, horrid brutes,' she concluded, 'I have bored you with them too often in the past.'

We assured her that she had never uttered a word on the subject while in our company, but she refused to be drawn. 'I know,' she said, 'that you're sick to death of the story. I'm not going to tell it again.'

'hisbe,' I asked, 'in what country did you have these experiences?' Thisbe is widely travelled.

'In what country?' she exclaimed, in the don't- be-so-silly tone which one might adopt to a BBC quiz-master who had asked one the date of the Battle of Hastings. 'Why, in Deauville, of course!'

What colour (enquired, inevitably, one of the junior hippophiles) was the horse? What was it called? asked the other.

By her inability' to answer either of these fundamental questions Thisbe's credit was called in question. She told her story.

I was nineteen (she -said) and I rather fancied a Frenchman, a frightfully good polo-player, I expect you remember him, Raoul do Mimizan. It was de Mimizan-Something, actually, but never mind. Well, one day he said 'Thisbe, you must r-r-ride with me. I will sent a ponee to your villa on Tuesday morning.'

As you can imagine, I was determined to make art impression, and I bought a tricorne, a three- cornered hat. I'd seen Solange des Sangliers riding about in one, and she was—well, she was a great success with the gentlemen, older than me of course, and I found out where she got her hat and I got one too. What colour? Beige. And I had a pair of boots by Maxwell. What? No, not black; brown. Yes, of course they were new; I'd never really ridden properly before.

Well, Tuesday morning came and this ghastly animal turned up and needless to say he simply Wouldn't let me get on his back, kept on sidling away and being simply idiotic. Luckily the groom-, of all extraordinary things, turned out to be English, and after a bit he said 'Miss, it's yer 'at. Take it off and give it to me.' So I took off my divine tricorne and the groom held it under his arm and the horse stood as still as a lamb. (Of course I know that lambs don't stand still, Lucy. It's what's known as a figure of speech. Daddy will explain, afterwards.) So there I was (made up to the eyes, I need hardly tell you) trotting down to the plage in my Maxwell boots and my three-cornered hat which the groom had sort of smuggled on to my head; and there was Raoul waiting for me. Yes, naturally he was on a horse, darling, but you can't seriously expect me to remember its name after all these years. Off we went.

Well, I mean, what could you expect? My fiend of a pony simply flew. Raoul only made things worse by thundering along behind shouting 'Pas si vite, Thisbe! Faut ralentir!' I couldn't begin to stop the brute. I think I did jolly well staying on its foul back. All I could see was those huge, sharp, black rocks at the end of the beach. (Well, if you don't remember them, you ought to.) It was perfectly obvious that I was going to be dashed to pieces. Then suddenly, at the very last moment, a lot of people who I knew quite well emerged from these rocks—I suppose they'd been sun-bathing, although it wasn't all that fashionable in those days. Anyhow, there they were and they shooed my pony OUT TO SEA. Well, of course it stopped when it began to get out of its,depth, and when it stopped I shot off over its bead (yes, darling, into the sea) and Raoul came up and he was abso- lutely furious and everybody jabbered and I was put back on the pony and led home all the way along the beach. At the height of the season, it was.

Now do you understand why I'm not very fond of horses?

'And your trkorne, Thisbe?' we asked. 'What happened to that?'

'Believe it or not,' replied Thisbe, 'I have no idea.', Words can seldom have conveyed more vividly the stark realities of hippophobia.