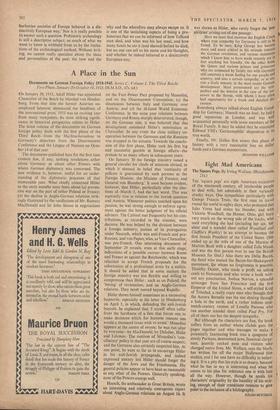 A Place in the Sun

ON January 30, 1933, Adolf Hitler was appointed Chancellor of the Reich by Marshal von Hinden- burg. From that date the former Austrian un- employed labourer dominated the headlines of the international press: 1933 was an exciting year from many viewpoints. Its most striking signifi- cance in historical perspective relates to Hitler. The latest volume of the documents on German foreign policy deals with the first phase of the Third Reich—from the Machtuebernahme to Germany's departure from the Disarmament Conference and the League of Nations on Octo- ber 14 of that year.

The documents published here for the first time contain few, if any, striking revelations either about Germany or about other Powers with whom German diplomacy was concerned. The new evidence is, however, useful for an under- standing of the diplomatic processes of that memorable year. What chiefly concerned Hitler in the early months were fears about (a) preven:- tive war on the part of either Poland or France; (b) the decline in Anglo-German relations strik- ingly illustrated by the vacillations of Mr. Ramsay MacDonald and Sir John Simon in negotiations on the Four-Power Pact proposed by Mussolini, and on the Disarmament Convention; (c) the dissensions between Italy and Germany over Austria; and (d) the ill-fated World Economic Conference. In the same year relations between Germany and Russia sharply deteriorated, though, on the German side, it, was believed that this development antedated Hitler's nomination as Chancellor. In any event the close military co- operation between the Germans and the Russians was dropped in the autumn. Towards the conclu- sion of this first phase, Hitler took his first big and successful gamble in foreign affairs—the prelude to so many others in subsequent years.

On January 30 the foreign ministry issued a general circular for chiefs of missions abroad, in which it stressed its belief that 'continuity of policies is guaranteed by such persons as the Foreign Minister, the Minister of Finance, and General von Blomberg.' It soon became evident, however, that Hitler, particularly after the elec- tions of March 5, had the last word. This was especially true in relation to the Jewish question - and Austria. Whenever politics touched upon his passion, he was strong enough to enforce agree- ment against the better judgment of his official advisers. The Cabinet met frequently but his con- tributions, as recorded in the minutes, were decisive. He was helped by the division between a foreign ministry, jealous of its prerogatives under Neurath, which was anti-French and pro- Russian, and von Papen, who, as Vice-Chancellor, was pro-French. One interesting document of September 29 reveals, even at this early stage, indications of a possible entente between Rome and France as against the Reichswehr, which was reluctant to accept French proposals for the substitution of a professional army by a militia. It should be added that in some matters the foreign ministry was less flexible and willing to compromise than Hitler : such as on Poland, the 'timing' of revisionism, and on Anglo-German relations. They never moved beyond Rapallo.

Hitler shows himself sometimes as a nauseating hypocrite, especially in his letter to Hindenburg on April 5, in which, defending the anti-Jewish boycott, he explained that `I myself often suffer from the harshness of a fate that forces one to make decisions which for humane reasons one would a thousand times wish to avoid.' Mussolini appears at the centre of events; he was run after by everyone—by MacDonald, by. Daladier, Hitler and Litvinov. The motives of Mussolini's 'con- ciliatory' policy in that year are of course suspect; and the Germans also certainly suspected him. At one point, he went so far as to encourage Hitler in his anti-Jewish propaganda, and indeed expressed anxiety lest Hitler should forget the danger of the Jews and the Freemasons. His general policies appear to have been as reasonable as any other of the Powers. Generally speaking, none of the Powers emerge well.

Hoesch, the ambassador in Great Britain, wrote an interesting and relatively courageous report about Anglo-German relations on August 16. It was shown to Hitler, who rarely forgot the 'pos- sibilities' arising out of one passage : Here we must first mention the English Court, where true sympathy for Germany is still to be found. To be' sure, King George has become more and more critical in his attitude towards the German revolution, and various statements which I know him to have made recently are in fact anything but friendly. On the other hand, the Queen and various princes and princesses who are connected by family ties with Germany still entertain a warm feeling for our people and country, and also a certain sympathy, or at any rate a lively interest, in the most recent German development. Most pronounced are the sylrn" pathies. and the interest in the case of the sue' cessor to the throne, with whom I have often had opportunity for a frank and detailed dis- cussion.

ship for Germany; Hoesch was no fool; he had a good reputation in London and was well acquainted personally with some members of the Royal Family. It may be added that he estimated Edward VIll's `Germanophile' disposition at its true worth.

Finally, Mr. Dulles first enters that phase history with a very reasonable line on doll funds and a German moratorium.