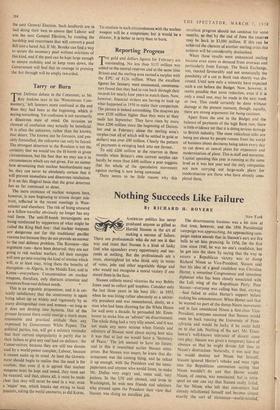 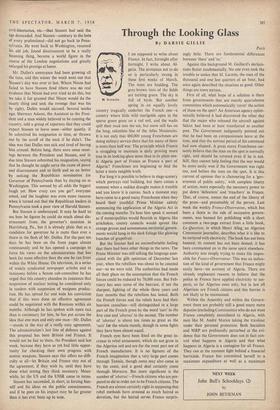 By RICHARD H. ROVERE yfr AMERICAN politics has never produced anyone as gifted as Harold Stassen in the art of Stassen collects moral victories the way Bobby Jones used to collect golf trophies. Consider only the last three years in his busy life : in 1955, when he was living rather obscurely as a univer- sity president and was remembered, dimly, as a man who had been shooting for the White House for well over a decade, he persuaded Mr. Eisen- hower to make him an 'adviser' on disarmament. The whole thing had a very silly sound, and'it was not made any more serious when friends and admirers of Stassen went about saying how nice it was that at last we would have a 'Secretary of Peace.' The job seemed to have no future, and in this it resembled earlier Stassen enter- prises. But Stassen was smart; he knew that dis- armament was the coming thing, and he talked it up enough, with the President and the news- papermen and anyone who would listen, to make Mr. Dulles very angry and, some said, very jealous. In the UN and abroad, and even in Washington, he won new friends and admirers who pressed upon the President their view that Stassen was doing an excellent job. The disarmament business was a bit slow at that time, however, and the 1956 Presidential campaign was approaching. An approaching cam- paign makes sounds that in Stassen's ears are fire bells to set him prancing. In 1956, for the first time since 1940, he was no one's candidate, but he got into the show by saying that the way to ensure a Republican victory was to dump Richard Nixon as Vice-President. Stassen said that his idea of a good candidate was Christian Herter, a sometime Congressman and sometime diplomat who has been closely associated with the Left wing of the Republican Party. Poor Stassen—everyone was calling him that, anyway —had failed to enlist Herter's support before making his announcement. When Herter said that he wanted no part of the dump-Nixon movement and in fact considered Nixon a first-class Vice- President, everyone assumed that Stassen would soon be back running the University of Penn- sylvania and would be lucky if he could hold on to that job. Nothing of the sort. Mr. Eisen- hower's well-known tolerance of dissent came into play; Stassen was given a temporary leave of absence so that he might devote full time to Nixon's destruction. Naturally, it was said that he would destroy not Nixon but himself. Stassen ignored Herter's rebuke and went right into the Republican convention saying that Nixon wouldn't do and that Herter would. Nixon, of course, was nominated, but in retro- spect no one can say that Stassen really failed, for the Nixon who left that convention had already refashioned himself and become almost exactly the sort of statesman—world-minded, civil-libertarian, etc.—that Stassen had said the age demanded. And Stassen—contrary to the bets of every professional—did not go back to Penn- sylvania. He went back to Washington, resumed his old job, found disarmament to be a really booming thing, became a world figure in the course of the London negotiations and greatly enlarged his prestige at home.

Mr. Dulles's annoyance had been growing all the time, and this winter the word went out that Stassen's day was over at last. Where Nixon had failed to have Stassen fired (there was no real evidence that Nixon had ever tried to do this, but We take it for granted that Nixon would do the manly thing and seek the revenge that was his by right), Dulles would succeed. Several weeks ago, Sherman Adams, the Assistant to the Presi- dent and a man widely believed to be running the country, told a group of reporters that they could expect Stassen to leave soon—either quietly, if he submitted his resignation in time, or thrown out by the scruff of the neck if he didn't. The idea was that Dulles was sick and tired of having him around. Before long, there were some meet- ings between the. President and Stassen, and in due time Stassen submitted his resignation, saying that he thought he might serve the cause of peace and disarmament and so forth and so on better by seeking the Republican nomination for Governor of Pennsylvania than by staying on in Washington. This seemed by all odds the biggest laugh yet. How crazy can you get? everyone asked, and the laughter was even more raucous when it turned out that the RepUblican leaders in Pennsylvania took a poor view of Harold Stassen.

But Stassen is undismayed. It may be hard to see how he figures he could do much about dis- armament from the governor's mansion in Harrisburg, Pa., but it is already plain that as a candidate for governor he is more than ever a thorn in the flesh of Mr. Dulles. For the past ten days he has been on the front pages almost continuously and he has opened a campaign to force his views on the administration that has beeh far more effective than the one he ran from within the White House. On television, in a series of widely syndicated newspaper articles and in testimony before a Senate sub-committee he has urged that this country abandon its insistence that suspension of nuclear testing be considered only in tandem with suspension of weapons produc- tion. He has spread far and wide his conviction that if this were done an effective agreement could be negotiated with the Russians within six months. Although he has spoken with more tact than is customary for him, he has put across the idea that one man and only one man—Mr. Dulles —stands in the way of a really cosy agreement. The administration's last line of defence against this proposal has been Britain and France. It would not be fair to them, the President said last week, because they have as yet had little oppor- tunity for checking their own progress with atomic weapons. Stassen says this offers no diffi- culty at all—let Britain and France stay out of the agreement, if they wish to, until they have done what testing they think necessary. Mean- while, let the US and the USSR come to terms.

Stassen has succeeded, in short, in forcing him- self and his ideas on the public consciousness, and if he goes on his impact may be far greater than it has ever been up to now.