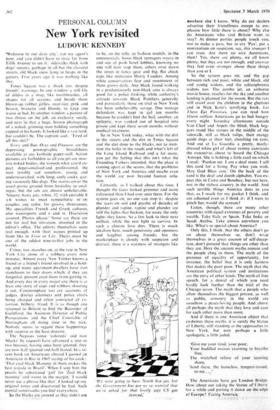 'Welcome to our dirty city', ran my agent's note, and you didn't have to stray far from

Fifth Avenue to see it : sidewalks thick with dogs' messes, garbage in all but the classiest streets, old black snow lying in heaps in the gutters. Five years ago it was nothing like this.

Times Square was a shock too, despite

blown-up rubber girlies, man-size, pink and brown, brunette and blonde, to keep one warm in bed. In another window a picture of two rhinos on the job, an exclusive surely, and next to that a huge, brown photograph of a naked, grinning man holding something cupped in his hands. It looked like a vast turd, but couldn't be. The caption said : 'Tired of all this shit?'

editor's office. The editors themselves seem real enough, with their names printed up front like in Time or Life. Theirs must be one of the oddest nine-to-five jobs in the world.

Crime, too, marches on, at the rate in New York City alone of a robbery every nine minutes. Almost every New Yorker knows a friend or a friend's friend involved in a hold- up, and many apartment-dwellers have iron stanchions to their doors which, if they are forgetful, prevent even them from getting in. And every day in every major city there is at least one story of cops and robbers shooting it out. Commonplace too are accounts of judges. district attorneys and police chiefs being charged and often convicted of ex- tortion. bribery, fraud. It is as though one returned to Britain to find the Recorder of Guildford, the Assistant Director of Public Prosecutions and the Chief Constable of Nottingham all doing time in the nick. Nobody seems to regard these happenings with surprise or the least distaste.

The Negroes (once 'coloreds' and now 'blacks' by request) have advanced a step or two because, having once been ignored, they are now half ignored and half feared. In a re- cent book on Americans abroad I quoted an American in Rio in 1965 saying of his cook :

'That coal black Mammy in there makes the best feijoda in Brazil'. When I sent him the

proofs he substituted 'girl' for 'goal black mammy' and wrote in the margin. 'I would never use a phrase like that'. I looked up my original notes and discovered he had. Such mental somersaults you find everywhere.

So the blacks are around as they didn't use to be, on the telly, as fashion models, in the commercials. Some black teenagers weave in and out of posh hotel lobbies, knowing no one will dare stop them, others strut down the street in fancy gear and big, flat check caps like miniature Harry Lauders. Among white conservatives fear and resentment of them grows daily. Any black found walking in a predominantly non-black area is always good for a police frisking, while authority's attitude towards Black Panthers generally and particularly those on trial in New York has been unbelievably savage. One teenage defendant was kept in jail ten months because he couldn't find the bail, another, an epileptic, was yanked out of hospital into prison and kept there seven months without medical treatment.

So in New York today, what with the dirt in the streets and the dirt in Times Square and the dirt done to the blacks, not to men- tion the holes in the roads and what's left of the Long Island Railroad and a lot more, you get the feeling that this isn't what the Founding Fathers intended, that the place is coming apart at the seams, that the problems of New York and America and maybe even the world are now beyond human solo tion.

Certainly, as I walked about this time, I thought the faces looked grimmer and more exhausted than I had ever seen them. For the system goes on, no one can stop it : despite the scars on soil and psyche of decades of plunder and rapine, rapine and plunder are still the lights that beckon, for many the only lights they know. So a few look to their next million, while the rest fight to survive. In such a climate love dies. There is much idealism here, much generosity and openness and laughter among friends; but the marketplace is cloudy with suspicion and distrust, there is a wariness of strangers like

We were going to have North Sea gas, but the Government has got us so worried that we've asked for that lovely safe CS gas instead,'

nowhere else I know. Why do car dealers advertise their friendliness except to em- phasise how little there is about? Why else do Americans who visit Britain want to stay? At dinner parties people touch you, not to make a pass, but to cry 'Pax', put a moratorium on suspicion, say, this stranger I can trust. Are there no nice Americans, then? Yes, there are plenty, we all know plenty, but they are not enough, anti anyway they feel even stronger about these things than you or I.

So the system goes on, and the gap between rich and poor, white and black, old and young widens, and the schizophrenia widens too. The jumbo jet, an airborne movie house, reaches for the sky and another landing is planned for the moon. But the rats still crawl over the children in the ghettoes and in Nick Kotz's terrifying book, Let Them Eat Promises, you can read how fifteen million Americans go to bed hungry every night. Saturday afternoons outside Van Cleef and Arpels the blind, black beg- gars stand like statues in the middle of the sidewalk, still as black tulips, their mangy guide dogs at their feet, clutching tin cans. And out at La Guardia a pretty, nicely- dressed white girl of about twenty canvasses the executives about to board the Chicago Astrojet. She is holding a little card on which I read : 'Pardon me. I am a deaf mute. I sell this card for a living. Pay what you wish. May God Bless you.' On the back of the card is the deaf and dumb alphabet. You ex- pect this in Cairo and Bombay, but not here. not in the richest country in the world. And such terrible things America does to you that, as I reach for my pocket I think, and am ashamed even as I think it: if I were to pinch her, would she scream?

Listen, though, there are many other countries with equal extremes of poverty and wealth. Take Italy or Spain. Take India or Saudi Arabia. Take almost anywhere you like. What's so special about America?

Only this, I think. that the others don't go on about themselves so, don't wrap themselves in a great cocoon of self-decep- tion, don't pretend that things are other than they are. Here the ancient myths remain and the people cling to them. The myth of the pretence of equality of opportunity, for instance, the belief that it is only laziness that makes the poor poor. The myth that the American political system and institutions are the envy of other lands. The myth of free speech, for a denial of which you need hardly look further than the trial of the Chicago seven. The myth that a people who allow themselves the biggest private, as well as 'public, armoury in the world are somehow a peace-loving people. And above all perhaps the myth that they love and care for each other more than most.

And if there is one American object that enshrines these myths, it is surely the Statue of Liberty, still standing at the approaches to New York, but now perhaps a little apologetic, a little jaded.

'Give me your tired, your poor, Your huddled masses yearning to breathe free, The wretched refuse of your teeming shore, Send these, the homeless, tempest-tossed, to me

The Americans have got 'London Bridge. How about our taking the Statue oP Liberty for a while and putting it down on the edge of Europe? Facing America.