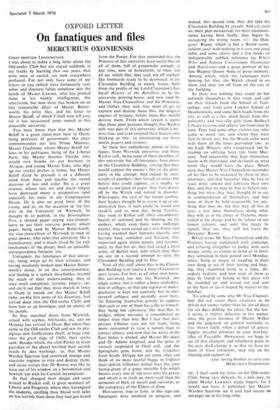 I was about to indite a long letter about the Old-soules Club but am stayed suddenly in my tracks by learning that our posts, that were once so sacred, are now everywhere profaned. For not only have some of my letters to you (which were fortunately very sober and discreet) fallen somehow into the hands of Master Lawson, who has" printed them in his weekly intelligencer, the SPECTATOR, but now there has broken on us this lamentable affair of Master Butter- worth, his privy files, and his letter to Master Beloff; of which I shall now tell you, for it has occasioned some tumult in this peaceable university.

You must know then that this Master Beloff is a great states-man here in Oxon, being professor of government. His chair commemorates our late Prime Minister, Master Gladstone, whom Master Beloff fol- lows in his politiques, being of the Liberal Party, like Master Jeremie Thorpe, who would rain bombs on our brethren in Afrique, and young Master Eaks, who digs up our cricket pitches at home; but Master Beloff (God be praised) is of a different mind from these and teaches the sound doctrine of law and order. He is a great oratour, whose rare wit and sharp tongue have destroyed many a proposition (and especially his own) in our Congregation House. He is also no great lover of the young, and so, on the occasion of the late stirs in the University of Warwick, he thought fit to publish, in the Birmingham Post, a shrewd paper urging vice-chancel- lours to use their coercive powers; which paper, being read by Master Butterworth, the vice-chancellour of Warwick (a man of great power, who rules that university like a manufactory, and is much loved by the rich mechanicks of the place), bred an amicable correspondence between 'em.

Unhappily, the fanatiques of that univer- sity, being whipt up by their tribunes, and having insolently broken into Master Butter- worth's closet, lit on this correspondence, and finding in it certain dissyllables, beyond the reach of their understanding, they at once smelt conspiracy, tyranny, popery, etc, and cry'd out that they must march in force to Oxon to smoak out this Master Beloff (who, on (the first news of his discovery, had retired deep into the Old-soules Club) and burn him as an heretique, and an enemy of the people.

So they marched down from Warwick, armed with scythes, bill-hooks, etc, and on Monday last arrived in Oxon. But when they came to the Old-soules Club and saw its pro- digious new fortfications (built, at huge cost, since the great siege of 1968). their spirits sank. Besides which, the club Porter (a stout guardian of the place) terrified their rustick minds by dire warnings: as, that Master Warden Sparrow had contrived strange and exquisite engines to trap and destroy them, and (even worse) that Dr Rowse was like to issue out of his window on a broomstick and bewitch 'em with his Cornish incantations.

So they changed their design and went instead to Ruskin coll. (a great seminary of Liberty and Progress), where they harangued the students, curdling their blood with tales no less terrible than those they had just heard from the Porter. For they pretended that the Proctors of this university keep secret files on all of them, full of gunpowder enough, at any time, now or henceforth, to blow 'em all up; which files, they said, are all stacked, like bombards ready to be detonated, in the Clarendon Building (a stately house, built from the profits of my Lord Clarendon's late loyall History of the Rebellion to be the university printing-house, and now used by Master Vice-Chancellour and the Proctors); and thither, they said, they must all go. to capture and destroy those files, the magical engines of tyranny, before those files should destroy them. From which speech it seems that those poor peasants thought that Ruskin coll. was part of this university, which is no- wise true, and even cozened their hearers into thinking so too: so intoxicating are those words popery and tyranny.

So these two confederate armies of fana- tiques, from Warwick university and from Ruskin coll., being none of them members of this university but all foreigners, bore down on the Clarendon Building, vowing that they would capture the enemy's files or die glori- ously in the attempt. And indeed. by meer weight of numbers, they forced an entry; but before they could capture, as a trophy, so much as one piece of paper, they were driven off by the Watch and retired in disorder. Whereupon, the zeal of the troops cooling. their leaders thought fit to warm it up at our domestick fires, if such could be found and stoak'd; and so, next day, being Tuesday. they went to Balliol coll. (that smouldering hearth of sedition) and by blowing on the embers, which even there were well-nigh extinct, they soon raised up a new flame; and having warmed their buttocks thereby, and become loud, confident and flatulent, they vaporised again about popery and tyranny. until, by that hot air, they had raised a third army, of Balliol men, with which they then set out on a second attempt to seize the Clarendon Building and its files.

Now all this stuff about files in the Claren- don Building is of course a meer chimaera or ignis fatuus. For first, as all other men know, this university has not, like Warwick, one single centre, but is rather a loose confedera- tion of colleges, so that any register of under- graduates is kept not centrally but in their severall colleges; and secondly, even there. 'tis flattering themselves grossly to suppose that each or any of them has a file to himself. they being but ephemera. like may-flies or midges, whose nuisance is remembered no longer than their bite. But I fear that their present tribunes care not for truth, being more concerned to raise a tumult than to correct abuses; and now that the warre in the East Indies is abated, and Master Ho dead. and Dr Adams knighted, and the price of victuals suspended in Oriel coll., and the Springboks gone home, and the cricketers from South Afrique not yet come, they can think of no more fearful bugge to frighten their doltish followers withal than this poor turnip-ghost of a great invisible File which haunts every one of 'em even unto the grave; and which is in truth no more reall than the torments of Hell, or incubi and succubae, or the conspiracy of the Elders of Zion.

Howsoever, true or false, in this sign our fanatiques were resolved to conquer, and indeed, this second time, they did take the Clarendon Building by assault. And yet, even so, their plan miscarried: for their reconnais- sance having been faulty, they began by occupying the wrong room, viz: the Dele- gates' Room, which is but a Board room, seldom used, with nothing in it save one great table and some chairs and a few books of indispensable publick reference (as Who's Who and Statuta Universitatis Oxoniensis and Raceform) and a great portrait of her late Majesty Queen Anne of pious memory. Among which, while the fanatiques were hunting for files, the Watch closed in on them and shut 'em off from all the rest of the building.

So there was nothing they could do but entrench themselves in that room and call on their friends from the School of Tech- nology, and from your London School of Oeconomicks. and some Skin-heads from the city, as well as a few shock-heads from this university and two silly girls from Bodley's Library to come and relieve 'em from time to time. They had some other visitors too, who came to mock 'em, and whom they were fain to throw out, but the Watch (who were with them all the time) prevented 'em: as my Lady Wheare, who exasperated 'em by reading an edifying fairy tale from Mus- covy. And meanwhile they kept themselves warm with rhetorique and declared on what terms they would leave the place. Which were, that Master Vice-Chancellour surrender all his files to he inspected by them or their attorneys, and that hereafter they be free to read, write, amend and fabricate their own files, and that no man be free to believe any- thing but what they have thought fit to say in commendation of themselves, and that none of them be held responsible for any- thing that they do, but that they all live at ease, a law unto themselves, doing what they will, as in the abbey of Thelema, main- tained at the charge and by the labour of our honest citizens; and until this treaty be signed, they say, they will not leave the Delegates' Room.

Which terms Mr Vice-Chancellour and the Proctors having repudiated with contempt. and refusing altogether to parley with such mangy cattle, as cloven in mind as in hoof. they remained in their pound until Monday. when, being as weary of treading in their own dung as we of their lowing and bray- ing, they shambled forth in a lame, dis- orderly fashion; and now such of them as may be found to belong to this place will be rounded up and sorted out and sent to the byre or (as is hoped by many) to the butcher.

Tis asked by some why Mr Vice-Chancel- lour did not cause these creatures to be driven out sooner rather than let 'em sit there for six days defiling the place; but the law. it seems, is mighty defective in this matter, since the great business of Master Wilkes and the judgment on general warrants, as was shown lately when a parcel of greasy hippies invaded premises in your bowling- alley of Piccadilly. Howsoever, we hope to see all that changed; and whichever party in the state shall change it, so that we have no more of these intrusions, may rely on the blessing and support of your loving brother to serve you MERCURIUS OXONIENSIS Ps: I shall send my letter on the Old-soules Club, being very delicate, by a new way, to elude Master Lawson's nippy fingers; for I would not have it published, lest Master Warden Sparrow see it and find means to entangle me in his long robe.