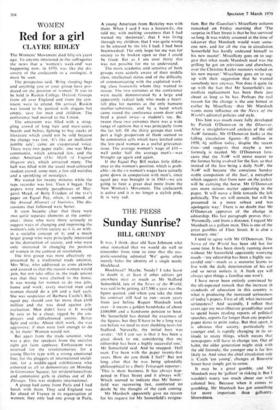 It was, I think, dear old Sam Johnson who once remarked that we would . do well to remember from time to time that the ma- jestic-sounding editorial 'We' quite often merely hides the identity of a single needy blockhead.

Blockhead? Maybe. Needy? I take leave to doubt it, at least if other editors get anywhere near as much as Mr Stafford Somerfield, late of the News of the World, was said to be getting. £17,500 a year was the figure quoted, and when you take the time his contract still had to run—seven years from just before Rupert Murdoch took over—it means a golden handshake of about £100,000 and a handsome pension to boot. Mr Somerfield has denied the exactness of the figures, but they'll have to be a long way out before we need to start shedding tears for Stafford. Naturally, the initial hurt was severe: 'All I can say is that it has been a great shock to me, considering that my editorship has been a highly successful one,' Mr Somerfield said. And he snapped, 'Hell man, I've been with the paper twenty-five years. How do you think I feel?' But not long after that he was being splendidly philosophical to a Daily Telegraph reporter: 'This is show business. It has always hap- pened in Fleet Street and it always will' Which seemed to indicate that Mr Somer- field was recovering fast, comforted no doubt by the thought of the cash coming.

Lion. But the Guardian's Miscellany column remarked on Friday morning that 'The surprise in Fleet Street is that he has survived so long. It was widely assumed at the time of takeover that Murdoch would want some- one new, and for all the rise in circulation Somerfield has hardly endeared himself to his new master'. Miscellany goes on to sug- gest that what made Murdoch mad was the grilling he got on television and elsewhere, over the Christine Keeler memoirs wished on his new master.' Miscellany goes on to sug- up with their suggestion that he wanted somebody new anyway. Not does it quite tie up with the fact that Mr Somerfield's im- mediate replacement has been there just about as long as he has. Perhaps the real reason for the chatige is the one hinted at earlier by Miscellany—that Mr Murdoch wants more influence on the News of the World's editorial policies and style.

This hint was much more fully developed by Patrick O'Donovan in the Observer. After a straightforward analysis of the old NoW formula, Mr O'Donovan looks at the falling circulation figures-8f million in 1950, 61 million today, despite the recent rises—and suggests that maybe a new formull is needed. Mr O'Donovan fore- casts that the NoW will move nearer to the format being evolved for the Sun, so that instead of the Sun being a daily NoW, the NoW will become 'the conscious Sunday stable companion of the Sun', a metaphor which suggests that from now on the jockey will be carrying the horse. Mr O'Donovan sees more serious matter appearing in the paper. 'It will move a little towards the left politically. The sex will remain, but will be presented in a more robust and less apologetic way.' There is no doubt that Mr O'Donovan approves of the change in editorship. His last paragraph proves that: 'Personally, and from a distance, I regard Mr Murdoch as a gallant man. This is one of the great gambles of Fleet Street. It is also a necessary one.'

I tend to agree with Mr O'Donovan. The News of the World has been old hat for some time. It has been slowly running down without Mr Somerfield apparently worrying much—`my editorship has been a highly suc- cessful one'—much as a motorist learns to live with the daily deterioration of his car and so never notices it. A fresh eye will always spot things a familiar one won't.

I have never been entirely convinced by the-oft-repeated remark that the increase in standards of education in this country is what is producing the increased seriousness of today's papers. First of all, what increased seriousness? And secondly, I reflect that years ago my near-illiterate grandfather used to spend hours reading reports of political speeches, reports far longer than any popular paper dares to print today. But that apart, it is obvious- that society, particularly its younger end, is rapidly changing in its at- titude to many things, which means that newspapers will have to change too. Out of habit, the older generatimi might stick with the old formula; the younger one is far less likely to. And since the chief circulation rule is 'Catch 'em young', changes at Bouverie Street have simply got to come.

It may be a great gamble, and Mr Murdoch may be 'gallant' in risking it. But I wouldn't worry too much about our wild colonial boy. Because when it comes to gambling, Mr Murdoch has got something far more important than gallantry. Shrewdness.