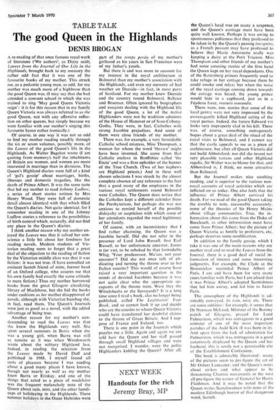 The good Queen in the Highlands

A re-reading of that once famous royal work of literature (We authors', as Dizzy said), Leaves from the Journal of Our Life in the Highlands, brought back to my memory the rather odd fact that it was one of the favourite books of my mother. This struck me, as a pedantic young man, as odd, for my mother was much more of a highbrow than the good Queen was. a may say that she had attended a convent school in which she was trained to sing 'May good Queen Victoria reign': it is for this reason that in my family Queen Victoria was always referred to as the good Queen; not with any offensive reflec- tion on other queens, but simply because we were familiar with our mother's singing this favourite hymn rather ironically.)

Of course, in one way it was not so odd to find my mother reading steadily through the six or seven volumes, possibly more, of the Leaves of the good Queen's life in the Highlands. As Walter Bagehot wrote (I am quoting from memory), half the inhabitants of Britain are women, and women are more interested in marriage than in divisions. The Queen's Highland diaries were full of a kind of `gal's gossip' about marriages, births, illnesses and domestic tragedies, like the death of Prince Albert. It was the same taste that led my mother to read Johnny Ludlow, a series of short stories written by Mrs Henry Wood. They were full of domestic detail almost identical with that which filled the Queen's diaries. Not quite identical, for I remember reading in one of the Johnny Ludlow stories a reference to the possibilities of birth control which, naturally, did not find any place in the Queen's diaries.

I think another reason why my mother en- joyed the Leaves was that it salved her con- science a little bit about her fondness for reading novels. Modern students of Vic- torian reading seem to forget that a great deal of the objection to the reading of fiction by the Victorian middle class was that it was fiction: it was not true. (I have consulted an eminent Scotch friend of mine, former head of an Oxford college, who assures me that his own family had exactly the same attitude to mere fiction.) Thus my mother borrowed books from the great Glasgow circulating library of Maclehose, but she hid the books under cushions as her mother disapproved of novels, although with Victorian humbug she, in fact, read them. The Queen's Journals were just as good as a novel, with the added advantage of being true.

Another reason for my mother's con- descending to read the Leaves was that she knew the Highlands very well. She spent several summers in Barra when she was a young girl, when Barra was still as remote as it was when Wordsworth wrote about the solitary iHighland lass. Indeed, in reading the selection from the Leaves made by David Duff and published in 1968, I myself found all sorts of pleasure because I was reading about a good many places I have known, though not nearly as well as my mother knew Barra or Eriskay, and one of the things that acted as a piece of madeleine was the frequent melancholy note of the Queen about rain, mist, and the other handi- caps of holidaying in the Highlands. These summer holidays in the Outer Hebrides were part of the temps perdu of my mother's girlhood as his years in San Francisco were of my father's youth.

But there is and was more to account for my interest in the royal architecture at Balmoral than my mother's association with the Highlands, and even my memory of bad weather on Deeside—in fact, in most parts of Scotland. For my mother knew Deeside and the country round Balmoral. Ballater and Braemar. Often ignored by biographers and essayists dealing with the Highland life of the good Queen, a lot of the native Highlanders were not by tradition admirers of the House of Hanover or of Saxe-Coburg- Gotha. They were, in fact, Catholics with strong Jacobite prejudices. And some of them were close friends of my mother.

There was, for example, a very formidable Catholic school mistress, Miss Thompson, a woman for whom the word `thrawn' might have been invented. She came from that Catholic enclave in Banffshire called 'the Enzie' and was a firm upholder of the banner of the True Church. (Two of her nephews are Highland priests.) And in these well chosen selections I was struck by the almost complete absence of any reference to the fact that a good many of the employees in the various royal settlements round Balmoral were Catholics. The Queen does notice that the Catholics kept a different calendar from the Presbyterians, but perhaps she was not anxious to remind herself of the possible disloyalty or scepticism with which some of her attendants regarded the royal legitimacy of her family.

Of course, with an inconsistency that I find rather charming, the Queen was a Jacobite herself. Did she not refer in the presence of Lord John Russell, first Earl Russell, to her unfortunate ancestor, James is (or vu), to be rebuked by that formidable Whig, 'Your predecessor, Ma'am, not your ancestor'? Did she not once talk of ab- dicating and turning the throne over to her Italian cousins? This would of course have raised a very important question in the minds of devoted Jacobites because it was not quite clear who the appropriate oc- cupants of the throne were. Were they the Wittelsbachs, or the Savoyards? It is a long time since I read a book, alas no longer being published, called The Legitimists' Year Book, and so cannot look it up and decide who are the cousins to whom Queen Victoria could have transferred her doubtful claims to the throne of Great Britain. And I sup- pose of France and Ireland, too. There is one point in the Journals which puzzles me a little. Again and again we are told how the Queen and her staff passed through small Highland villages and were not recognised. I wonder, were the polite Highlanders kidding the Queen? After all,

the Queen's head was on many a saxpence, and the Queen's carriage must have been quite well known. Perhaps it was owing to spontaneous politeness that they professed to be taken in by the Queen's passing incognito, as a French peasant may have professed to believe that Marie Antoinette really was keeping a dairy at the Petit Trianon. Miss Thompson and other friends of my mother's had some amusing stories of the firm hand the Queen kept on her royal dependants. One of the Battenberg princes frequently used to take refuge in her cottage because there he could smoke and relax; but when the noise of the royal carriage coming down towards the cottage was heard, the young prince would hide in a cupboard, just as in a Feydeau farce, mutatis mutandis.

There were, too, stories that some of the local gentry were not very impressed by the extravagantly kilted Highland acting of the royal parties. Indeed, the future Edward vii looks very improperly clad in his kilt. There was, of course, something outrageously bogus about a great deal of the ritual of the royal visits to Balmoral, and I cannot say that the castle appeals to me as a piece of architecture, but after all Queen Victoria did not build Abbotsford; nor did she invent not very plausible tartans and other Highland regalia. Sir Walter was to blame for that, and Abbotsford is, I think, no more attractive than Balmoral.

But the Journal makes nice soothing reading, and is superior to the various non- royal accounts of royal activities which are inflicted on us today. One also feels that the influence of Prince Albert survived his death. For we read of the good Queen taking the trouble to note, reasonably accurately, some of the theories of Sir Henry Maine about village communities. True, the in- formation about this came from the Duke of Buccleuch, as other information must have come from Prince Albert; but the picture of Queen Victoria as hostile to professors, etc, perhaps deserves some modification.

In addition to the family gossip, which I take it was one of the main reasons why my mother read and re-read the Leaves from the Journal, there is a good deal of social in- formation of interest and some interesting judgments. For example, the Clyde at the Broomielaw reminded Prince Albert of Paris. I am and have been for very many years familiar with Paris, but I am afraid that it was Prince Albert's adopted Scottishness that led him astray, and led him to flatter Paris.

The atmosphere of the Highlands is ad- mirably conveyed, its rain, mist, etc. There are some oddities : for example, it seems that Dr Norman McLeod, Minister of the Barony parish of Glasgow, prayed for Lord Palmerston, which was outrageous in a good minister of one of the most important parishes of the Auld Kirk (I was born in it). And apart from the lack of admiration for Palmerston, which was outrageous in a good notoriously displayed by the Queen and her husband, this is surely not a permissible rite of the Establishment Confession.

The book is admirably illustrated : many of the pictures seem to pre-figure the art of Mr Osbert Lancaster; and the Queen's notes about strikes and what appear to be threatening Chartist movements in the west all pre-figure the career of General Sir Harry Flashman. And it may be noted that the Queen writes Scotchwoman with none of the modern Edinburgh horror of that dangerous word, Scotch.