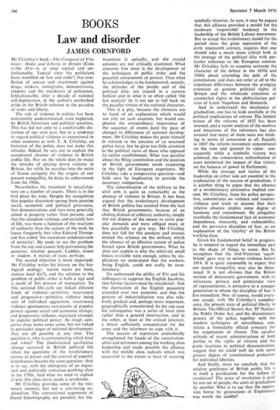 Mr Critchley's book—The Conquest of Vio4 lence: Order and Liberty in Britain (Cont stable 45s)—is at once topical and un- fashionable. Topical since the politicians have stumbled on law and order'; that con- flation of unease and resentment against drugs, strikers, immigrants, demonstrators, students and the murderers of policemen. Unfashionable, after a decade of national self-deprecation, in the author's unabashed pride in the British solution to the paradox of order and liberty.

The role of violence in politics has been consistently underestimated, even neglected, by British historians and political scientists. This has led not only to a comfortable dis- tortion of our own past, but to a tendency to regard political violence as exceptional in other countries as well. T. A. Critchley, an historian of the police, does not make this mistake. Indeed, he sets out to explain the exceptional absence of violence in British public life. Nor on the whole does he make the mistake of playing down violence in Britain, for while he searches into the mists of Saxon antiquity for the origins of our present tranquillity, he dates its achievement from the 1920s.

Nevertheless his treatment is unsatisfac- tory on a number of counts. There is in the first place his tone. Despite his recognition that popular discontent sprang from genuine social, economic and political grievances, that demonstrations and riots were generally aimed at property rather than persons, and that the attendant violence, and certainly loss of life, was more a function of the reactions of authority than the actions of the mob, he lapses frequently into what Edward Thomp- son has called 'the enormous condescension of posterity'. He tends to see the problem from the top and cannot help patronising the protester, whether peasant, Luddite, miner or student. A matter of taste, perhaps.

The second objection is more important. Mr Critchley writes his history on the bio- logical analogy: nation states are born, mature (and die?), and the solution to the problem of public order is both a sign and a result of this process of maturation. To this national life-cycle are linked different kinds of violence—primitive, reactionary and progressive—primitive violence being acts of individual aggression, reactionary violence spontaneous movements of popular protest against social and economic change; and progressive violence, organised attempts to capture political power. As rough cate- gories these make some sense, but not linked to particular stages of national development: they are all possible at any time. The question is, who is contemplating which kind and when? The fundamental qualitative change occurred in British political life when the questions of the revolutionary seizure of power and the control of popular disturbances became the same question: that is to say, with the emergence of an organ- ised and politically conscious 'working class in the 1790s. And what we need to explain is why this class never made a revolution.

Mr Critchley provides some of the nec- essary answers, but not a convincing ex- planation. The conventional arguments of liberal historiography are paraded, but the treatment is episodic, and the crucial episodes are not critically examined. What concerns him most is the development of the techniques of public order and the peaceful containment of protest. Thus what he acknowledges to be fundamental, namely, the attitudes of the people and of the political elite, are treated in a cursory fashion and in what is so often called 'the last analysis' he is too apt to fall back on the peculiar virtues of the national character.

This is a pity, because the elements are to hand of an explanation which would not rely on such evasions, but would em- phasise the extraordinary importance of the sequence of events (and the pace of change) to differences of national develop- ment. Mr Critchley makes the point himself in relation to the creation of an unarmed police force, but he gives too little attention to the political views of those who opposed its earlier establishment. What was peculiar about the Whig constitution and the position of British governments needs examining in the light of European experience. Mr Critchley asks a comparative question—and fails save by implication to provide the necessary comparison.

The subordination of the military to the civil arm is quite as remarkable as the absence of violence in Britain. It has been argued that the evolutionary development of British politics has resulted from the fact that British governments, because of an abiding distrust of arbitrary authority, simply did not dispose of the means to resist pop- ular demands and were obliged more or• less gracefully to give way. Mr Critchley does not fall for this anodyne and stresses instead the reliance on the military which the absence of an effective system of police forced upon British governments. What he does not explain is why the relatively small forces available were enough, unless by im- plication we understand that the workers, being English, could not really be revo- lutionary.

To understand the ability of Pitt and his colleagues to suppress the English Jacobins, two further factors must be considered: that the destruction of the English peasantry extended over two centuries, and that the process of industrialisation was also rela- tively gradual and, perhaps more important, geographically concentrated. In the one case the consequence was a series of local riots rather than a general insurrection, and in the other, at least at the critical juncture, a threat sufficiently concentrated for the army and the informers to cope with it.

The success of repression undoubtedly strengthened the hands of the constitution- alists and reformers among the working class leadership and made possible the alliance with the middle class radicals which was successful to the extent at least of securing symbolic victories. In turn, it may be argued that this alliance provided a model for the moderate 'responsible' tendency in the leadership of the British Labour movement. But to accept the evolutionary model for the period since the great repression of the early nineteenth century, requires that one should take a much more critical look at the strategy of the political elite with par- ticular reference to the European context. Mr Critchley fails to examine seriously the character of the debate in the 1830s and 1860s about extending the pale of the constitution, and does not refer at all to the important differences between the grudging extension of genuine political rights in Britain and the wholesale extension of counterfeit rights in the plebiscitarian pol- icies of Louis Napoleon and Bismarck.

And to understand the mechanics of gradualism, one has to look carefully at the political implications of reform. The limited nature of the reforms of 1832 has been stressed, and a recent analysis of the motives and intentions of the reformers has also stressed that many of them were not think- ing in terms of concession at all. Equally in 1867 the reform movement concentrated on the vote and ignored its value: con- sequently while a symbolic victory was achieved, the conservative redistribution of seats minimised the impact of that victory on the balance of power in Parliament.

While the strategy and tactics of the leadership on either side are essential to the explanation of the success of gradualism, it is another thing to argue that the absence of a revolutionary alternative implied con- sent. Mr Critchley, from his police perspec- tive, concentrates on violence and counter- violence and tends to assume that their relative absence implies some degree of harmony and contentment. He altogether overlooks the fundamental fact of economic dependence, insecurity, and vulnerability. and the pervasive discipline of fear, as an explanation of the 'docility' of the British working class.

Given his fundamental belief in progress, he is tempted to regard the immediate past as the shape of things to come. But he recognises that the mid-Victorian 'equili- brium' gave way to serious violence before 1914. It is quite reasonable to expect that our recent tranquillity may also be threa- tened. It is not obvious that the British version of democratic government, with its reticences, privacy and aristocratic view of representation, is attractive to a younger generation to whom the discipline of fear is less immediate. Nor, of course, would every- one accept, with Mr Critchley's complac- ency, the present state of political liberty in Britain. The Official Secrets Act, 'D' Notices, the Public Order Act, and the discretionary powers of the police together with the modern techniques of surveillance, con- stitute a formidable official armoury for the suppression of dissent. The cavalier attitude of recent administrations of both parties to the rights of citizens and the panic reactions to political demonstrations suggest that we could well do with some greater degree of constitutional protection for individual liberties.

And finally, must we conclude that the relative gentleness of British public life is in itself a justification for the failure of revolution? The price of revolution is paid by one set of people, the costs of gradualism by another. Who is to say that the oppres- sion borne by generations of Englishmen was worth the candle?