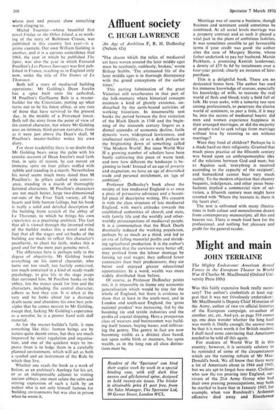 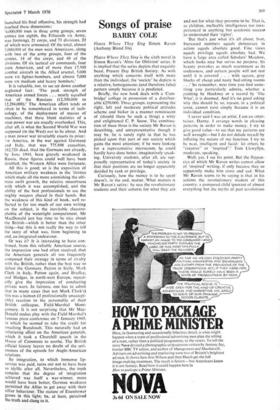 The Mighty Endeavour: American Armed Forces in the European Theater in World War II Charles M. MacDonald (Oxford Uni- versity Press 100s) Was this fairly expensive book really neces- sary? The author's credentials at least sug- gest that it was not frivolously undertaken: Mr MacDonald is Deputy Chief Historian of the Army, author of two us official histories of the European campaign, co-author of another, etc, etc. And yet, as page 519 comes up, one does wonder whether the long haul was worth it. Oddly enough; the answer may be that it is most worth it for British readers; I shall need some convincing that Americans needed to be told all this again.

For students of World War II in this country, however, it is certainly salutary to be reminded of some of the circumstances which are the running refrain of Mr Mac- Donald's book. We all know that there were a- lot of Americans about in 1944 and 1945, but we are apt to forget how many. Civilians who saw the urs pouring into England, sur- vivors of the 21st Army Group who had their own pressing preoccupations, may both be startled to learn that in January 1945, for example, when von Rundstedt's Ardennes offensive died away and Eisenhower

launched his final offensive, his strength had reached these dimensions:

It is valuable, too, to see set down another neglected fact: 'The peak strength of American armed forces . . . nearly equalled that of the Russians (12,500,000 to 12,294,000).' The American effort tends so often to be remembered in terms of tech- nology, of the deployment of masses of machines, that these blunt statistics of a man power war are usually overlooked. This, after all, is what the Second World War was supposed (in the West) not to be about. And a man power war invariably exacts its price: For America, in the war against Germany and Italy, that was 775,898 casualties, 182,524 dead. Had the Germans not already, by June 1944, been gravely weakened in Russia, these figures could well have been doubled; the Western Allies were fortunate.

All this is good; so is the exposition of American military weakness in the 'thirties which made all the more astonishing the ulti- mate swift growth, the relative smoothness with which it was accomplished, and the ability of the best professionals to use the mighty weapon placed in their hands. But the weakness of this kind of book, well re- flected in far too much of our own writing on the subject, is the inevitable claustro- phobia of the watertight compartment. Mr MacDonald just has time to be nice about the British—which is better than the other thing—but this is not really the way to tell the story of what was, from beginning to end, an integrated endeavour.

Or was it? It is interesting to have con- firmed, from this reliable American source, the impression one had often received, that the American generals all too frequently composed their strategy in terms of rivalry with the British, rather than the best way to defeat the Germans. Patton in Sicily, Mark Clark in Italy, Patton again, and Bradley, and Hodges, in north-west Europe, repeat- edly give the impression of conducting private wars. In fairness, one has to admit that in many cases (but not Mark Clark's) this was a human (if professionally unaccept- able) reaction to the personality of their British colleague, Field-Marshal Mont- gomery. It is not surprising that Mr Mac- Donald makes play with the Field-Marshal's famous press conference on 7 January 1945, in which he seemed to take the credit for smashing Rundstedt. This naturally had an infuriating effect on the American generals, which it took a Churchill speech in the House of Commons to soothe. The British official history leaves no doubt of the seri- ousness of the episode for Anglo-American relations.

So integration, to which immense lip- service was paid, turns out not to have been so idyllic after all. Nevertheless, the truth remains that the degree of integration achieved was itself a war-winner; more would have been better; German weakness permitted the Allies to get away with their sillier behaviour. The stature of Eisenhower grows in this light; he, at least, perceived the truth and clung to it.