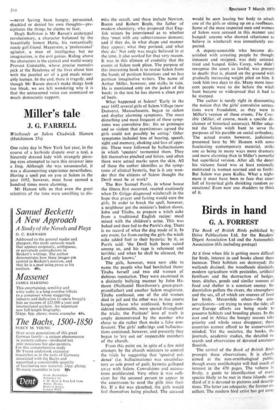 Witchcraft at Salem Chadwick ITansen (Hutchinson 35s) One rainy day in New York last year, in the course of a kerbside dispute over a taxi, a bizarrely dressed lady with strangely pierc- ing eyes attempted to turn this reviewer into a frog. Although she was unsuccessful, it was a disconcerting experience nevertheless. Having a spell put on you at Salem in the year 1692, however, must have seemed a hundred times more alarming.

miss the occult, and these include Newton, Bacon and Robert Boyle, the father of modern chemistry, who proposed that Eng- lish miners be interviewed as to whether they 'meet with any subterraneous demons; and if they do, in what shape and manner they appear; what they portend, and what they do.' Not only was magic believed in at the time, it also worked for that very reason. It was in this climate of credulity that the events at Salem took place. The purpose of this interesting book is to rescue Salem from the hands of partisan historians and no less partisan imaginative writers. The name of Arthur Miller, however, one stalks in vain. He is mentioned only on the jacket of the book; in the text he has shown a clean pair of heels.

What happened at Salem? 'Early in the year 1692 several girls of Salem Village (now Danvers), Massachusetts, began to sicken and display alarming symptoms. The most disturbing and most frequent of these symp- toms was convulsive fits: fits so grotesque and so violent that eyewitnesses agreed the girls could not possibly be acting.' Other symptoms included loss of hearing, speech, sight and memory, choking and loss of appe- tite. These were followed by hallucinations in which 'specters' tormented them. They felt themselves pinched and bitten, and often there were actual marks upon the skin. All of these the author identifies as the symp- toms of clinical hysteria, but is it any won- der that the citizens of Salem thought the Devil must be at work?

The Rev Samuel Parris, in whose house the illness first occurred, reacted cautiously when Dr Griggs diagnosed witchcraft in the hope that prayer and fasting would cure the girls. In order to break the spell, however, a neighbour got the minister's Indian slaves, John and Tituba, to prepare a witch cake from a traditional English recipe: meal mixed with the children's urine. This was baked and then fed to the Parris's dog. There is no record of what the dog made of it. In any event, far from curing the girls the witch cake added fuel to their hysteria: by it, as Parris said: 'the Devil hath been raised among us, and his rage is vehement and terrible; and when he shall be silenced, the Lord only knows.'

The girls, however, were now able to name the people who had bewitched them: Tituba herself and two old women of dubious reputation. They were examined in a distinctly bullying manner by John Ha- thorn (Nathaniel Hawthorne's great-great- grandfather) and another Salem magistrate. Tituba confessed, one of the old women died in jail and the other was in due course hanged (those who confessed, being con- sidered redeemable, were spared throughout the trials; the Puritans' love of truth is amply demonstrated by the number who chose to die rather than make a false con- fession). The girls' sufferings and hallucina- tions continued, however, and presently they began to 'cry out on' respectable members of the church.

From this point on, in spite of a few mild attempts by the church ministers to control the trials by suggesting that 'spectral evi- dence' (i.e. hallucinations) was unsatisfac- tory as sole proof of guilt, hysteria galloped away with Salem. Convulsions and accusa- tions proliferated. Very often it was suffi- cient for the accused person to appear in the courtroom 'to send the girls into their fits. If a fist was clenched, the girls would feel themselves being pinched. The accused

would be seen leaving her body to attack one of the girls or sitting up on a roofbeam. Some of the most respected men and women of Salem were accused in this manner and hanged: anyone who showed reluctance to believe in witchcraft was immediately sus- pected.

A deputy-constable who became dis- satisfied with arresting people he thought innocent and resigned, was duly accused. tried and hanged. Giles Corey, who didn't recognise the court as lawful, was pressed to death: that is, placed on the ground with gradually increasing weight piled on him. It took him two days to die. Many more inno- cent people were to die before the witch hunt became so widespread that it had to be stopped.

The author is surely right in discounting the notion that the girls' convulsive accusa- tions were fraudulent, as they were in Miller's version of these events, The Cruc- ible (Miller, of course, made a specific dis- claimer of historical accuracy). Miller adap- ted the Salem witch hunt to serve the purposes of his parable on social orthodoxy. The actual events however, judiciously presented here by Mr Hansen with some fascinating contemporary material, strike one as being in many ways more dramatic and more alarming than in Miller's powerful but superficial version. After all, the deceit his victoms faced was at least rationally motivated (a woman scorned and so forth). But Salem was pure Kafka. What a night- mare it must have been to face that court full of hysterical girls shrieking random ac- cusations! Even now one shudders to think of it.