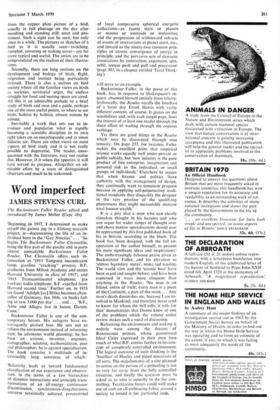 The Buckminster Fuller Reader edited and introduced by James Meller (Cape 48s) `Beginning in 1917, I determined to make myself the guinea pig in a lifelong research project; ie—documenting the life of an in- dividual born in the "Gay Nineties" ... ' So begins The Buckminster Fuller Chronofile, being the first part of the patchy and in parts almost unreadable Buckminster Fuller Reader. The Chronofile offers such in- formation as '1913 Tungsten incandescent lamp; gasoline "cracking" process; B.F. graduates from Milton Academy and enters Harvard University in class of 1917'; and `1915 Transcontinental telephone; gas warfare; radio telephone. B.F. expelled from Harvard second time.' Further on, in 1933 are found 'Adolph [sic] Hitler becomes chan- cellor of Germany, Jan 30th; us banks fail- ing at rate 5,000 per day' . . . and .. . 'B.F., Anne and Allegra live in house, Darien, Conn.'

Buckminster Fuller is one of the con- temporary heroes. His eulogists have ex- travagantly praised him. He sets out to reform the environment instead of reforming men; he advocates world planning; he has been an aviator, inventor, engineer, cartographer, scientist, mathematician, poet and philosopher; he is against specialisation. The book contains a multitude of in- terminably long sentences of which : `Relativity leads us toward fundamental classification of our experience and observa- tion, in the terms of a few hierarchies of dynamic interactions and principle trans- formations of an all-energy continuous- discontinuous, synchronous-dissychronous, universe tensionally cohered, processional

of local compressive spherical energetic collections—as (suns) stars or planets or moons or asteroids or meteorites; and the progression of withinward sub-sets of events of interactions at planet crust, etc., and inward to the ninety-two common prin- ciples of atomic convergence of energy in principle, and the pervasive sets of dynamic associations by contraction, expansion, spin, orbit, torque push and pull and precession' (page 307, in a chapter entitled 'Total Think- ing')

will serve as an example.

Buckminster Fuller, in the prose of this book, has, in response to Shakespeare's re- quest, absented himself entirely from felicity. Stylistically, the Reader recalls the bombast of a latter day Frank Harris with vastly different content, of course. It grates on the sensibilities and, with each turgid page, loses the interest of at least one reader through the sheer effort of wading through the copious verbiage.

Yet there are good things in the Reader which may be discovered through iron tenacity. On page 237, for instance, Fuller makes the excellent point that empirical science works equally well under private or public subsidy, but 'new industry is the pure product of free enterprise, imagination and personal risk to the individual, or small groups of individuals.' Elsewhere he argues that when finance and politics 'have authority with the management of design, they continually want to terminate progress because in applying self-perpetuating tradi- tional standards they disqualify the designer in the very practice of the qualifying phenomena that might measurably increase total human wealth.'

It is a pity that a man who can clearly stimulate thought in his lectures and who can argue for wider ranges of thought over and above narrow specialisations should now be represented by this first published book of his in Britain, according to the blurb. The book has 'been designed, with the full co- operation of the author himself, to present his most significant ideas and inspirations.' The embarrassingly fulsome praise given to Buckminster Fuller, and his elevation to `almost legendary status', make sad reading. The world view and the 'cosmic beat' have been urged and sought before, and have been expressed in ways more eloquent than anything in the Reader. 'No man is an Island, entire of itself; every man is a piece of the Continent, a part of the main ... Any man's death diminishes me, because I am in- volved in Mankind; and therefore never send to know for whom the bell tolls; it tolls for thee' demonstrates that Donne knew of one of the problems which the volume under review makes such a meal of discussing.

Reforming the environment and making it orderly were among the dreams of Renaissance princes, whose geometrical Ideal Cities expressed in their own time much of what B.F. carries further in his con- cept of completely controlled environment. The logical outcome of such thinking is the `Smellies' of Huxley and piped sensations of all sorts. The megalomania of a city planned to centre on the person of a princeling is not so very far away from the fully controlled situation; and finally the question must be asked as to who is actually to do the con- trolling. Totalitarian forces could well make use of such an all-embracing fabric around a society to mould it for particular ends.