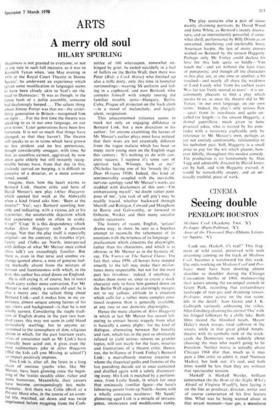 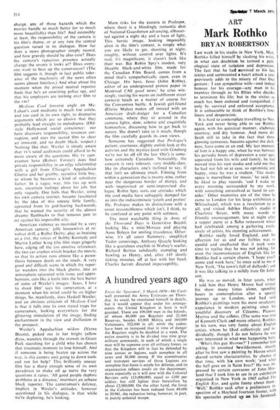 Medium Cool (Academy Two, 'X') Prologue (Paris-Pullman, 'X') Anne of the Thousand Days (Odeon, Leices- ter Square, 'A') 'Look out, Haskell, it's real!' This frag- ment of wild sound, preserved with such disarming cunning on the track of Medium Cool, becomes a watchword for this week. 1 he units working on Medium Cool and Pro- logue must have been shooting almost shoulder to shoulder during the Chicago Convention battles of 1968, manoeuvring their actors among the encamped crowds in Grant Park, recording that extraordinary landscape of tear-gas and dreaming towers. Prologue, more active on the riot scene, fills in the detail : Jean Genet and J. K. Galbraith variously addressing the tribes, Allen Ginsberg chanting his eternal 'Om' with his fringed followers by a chilly lake. Both films record the bloodied heads, Mayor Daley's shock troops, total collision in the streets, while in that great gilded Amphi- theatre with its symbolic reek of the stock- yards the Democrats went sedately about choosing the man who wasn't going to be President. Neither movie is actually about Chicago 1968 (for that, much as it may pain a film critic to admit it, read Norman Mailer); but look out, it's real, and both films would be less than they are without that spectacular tension.

'Haskell' is Haskell Wexler, brilliant cameraman (In the Heat of the Night, Who's Afraid of Virginia Woolf?), here laying it

on the line as producer, director, writer and of course cameraman of his first feature film. What was he being warned about in that errant moment—tear gas, a truncheon

charge, any of those hazards which the movies handle so much better (or so much more beautifully) than life? And ostensibly at least, the responsibility of the camera is his film's theme, or at any rate the central question raised in its dialogue. How far does a news photographer simply record, and how gravely should he also care? Does the camera's rapacious presence actually change the events it looks at? Does every- one want to beat up the cameraman? (The film suggests it, though in fact public toler- ance of the machinery of the news often seems almost limitless.) And what about the moment when the proud neutral reporter finds that he's an unwitting police spy, and that his employers are turning over film to the FRO

Medium Cool (reverse angle on Mc- Luhan's cool medium) is much too astute, and too cool in its own right, to dramatise arguments which are so elusive that they probably lead straight to melodrama. (Old- style Hollywood social conscience: our hero discovers responsibility, trounces cor- ruption, and uses the sacred film to clear an innocent, and no doubt black, suspect.) Nothing like that; Wexler is simply aware that TV'S sated audiences could afford to be more aware of the questions. His -ry cam- eraman hero (Robert Forster) does find private responsibility in an edgy relationship with a girl from Chicago's Appalachian Ghetto and her grubby, secretive little boy, to whom he becomes a kind of substitute father. In a vague way, this ties up with new, uncertain feelings about his job; but only vaguely. One feels that Wexler, using his own camera instinct, became fascinated by the idea of this uneasy little family, uprooted from its god-fearing backwoods, that he wanted the security of the almost dreamy flashbacks to that tenuous past to set against his impossible city.

American violence as recorded by a very American camera: jolly housewives at re- volver drill, a Roller Derby, play as bruising as a riot, the voices of Bobby Kennedy and Martin Luther King (the film steps gingerly here, edging off the too emotive reference), the two car crashes which bracket the movie, so that its action runs almost like a paren- thesis between death on the roads. A very good and difficult scene in which the repor- ter wanders into the black ghetto, into an atmosphere saturated with irony and appre- hension, cuts like a knife into the best butter of some of Wexler's images. 'Jesus, I love to shoot film' says his cameraman, at a moment when his mind could be on higher things. So, manifestly, does Haskell Wexler;

cameramen, looking everywhere for the glittering stimulation of the image, finding enchantment in the view and disillusion in the prospect.

Wexler's Appalachian widow (Verna Bloom), picked out in her bright yellow dress, wanders through the crowds in Grant Park searching for a child who has chosen that traumatic moment to lose himself. And if someone is being beaten up across the

way, is this camera unit going to down tools and run for help? This brilliantly uneasy

film has a sharp enough sense of its own paradoxes to shake off as naive the very questions it raises. 'All good people deplore problems at a distance,' murmurs an urbane black reporter. The cameraman's defence, implicit in Wexler's attitudes, however questioned in his dialogue, is that while we're deploring, he's looking.

More risks for the camera in Prologue, where there is a blindingly romantic shot of National Guardsmen advancing, silhouet- ted against a night sky and a haze of light, This heroic image, looking impossibly alien in the film's context, is simply what you are likely to get, shooting at night, roughly, without control over lights. It's real; it's magnificent; it doesn't look like their war. But Robin Spry's modest, very likeable black-and-white film, made for the Canadian Film Board, comes from a mind that's sympathetically open, even in Chicago. His hero, Jesse (John Robbe), editor of an underground protest paper in Montreal ('All good news.' he cries win- ningly, touting his wares on indifferent street corners) heads as a matter of course for the Convention battle. A Jewish girl-friend (Elaine Malus) makes off instead with an American draft-dodger for a Canadian commune, where they sit around in the camera lights, slow, solemn and exquisitely humourless, discussing hciw to get back to nature. She doesn't take to it much, though the film carefully guards its own views.

Someone has suggested that Prologue's patient, courteous, slightly owlish look at the activists and the mystics (and with Ginsberg we're not let off till the last 'Om') is some- how extremely Canadian. Noticeably, the concern is very tolerant; very middle-class, like its characters, one's inclined to say, if that isn't an ultimate insult. Filming from within a generation (he is twenty-nine, rather near the dangerous border of thirty), and with - improvised or semi-improvised dia- logue, Robin Spry sorts out attitudes which the cool media have unhappily dumped for us into the indiscriminate 'youth and protest' file. Prologue makes its distinctions with a sweet reasonableness which isn't, I think, to be confused at any point with softness.

The most watchable thing in Anne of the Thousand Days is Genevieve Bujold, looking like a mini-Moreau and playing Anne Boleyn for smiling truculence. Other- wise, it's all court flummery, simplified Tudor connivings, Anthony Quayle looking like a querulous crayfish in Wolsey's scarlet, Richard Burton subduedly stumping and bawling as Henry, and, after 145 slowly ticking minutes, off at last with her head. Charles Jarrott directed imperceptibly,