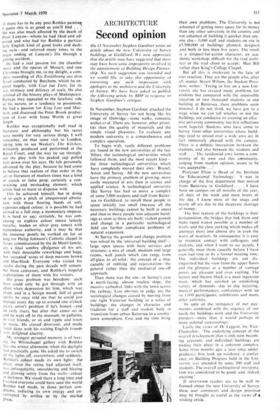 On 15 November Stephen Gardiner wrote an article about the new University of Surrey buildings at Guildford. We now appreciate that the article may have suggested that there may have been some impropriety involved in the appointment of Building Design Partner- ship. No such suggestion was intended and we would like to take this opportunity of correcting any such impression with apologies to the architects and the University of Surrey. We have been asked to publish the following article by BDP in response to Stephen Gardiner's critique.

In November, Stephen Gardiner attacked the University of Surrey for not being like his image of Oxbridge—stone walks, romantic arches et a/. There are, however, other priori- ties than the .quality of materials and the simple visual pleasures. To evaluate any modern university is a comprehensive and complex operation.

At Surrey the growth and change problem was solved by the 'universal building shell'— large open spaces with basic services and structure, a mix of small, medium and large rooms, wall panels which can range from all-glass to all-solid: the concept of a ship. capable of refitting and rejuvenation—the general rather than the mediaeval one-off approach.

Then there was the site—in Surrey's case a north-facing, almost treeless slope, the massive cathedral. links with the town across the railway. Less obvious to judge are the sociological changes caused by moving from one tight Victorian building to a series of buildings, the changes in character and tradition for a staff and student body in transition from urban Battersea to a county- town atmosphere. Cost and the time bring

their own problems. The University is not ashamed of getting more space for its money than any other university in the country and not ashamed of building it quicker than any- one else-3,000 staff and students on site in £5,500,000 of buildings planned, designed and built in less than five years. The result is a stripped-for-action character, an aca- demic workshop, difficult for the trad archi- tect or the trad client to accept: Max Bill rather than King's College Chapel.

But all this is irrelevant in the face of user reaction. They are the people who, after all, matter. Stuart Wilson, the Student Presi- dent, writes: 'Trying to live on a new Uni- versity site has created many problems for students but compared with the impossible situation of two thousand students in one building at Battersea, these problems seem minimal. I do not think we have got to a stage when we can tell whether or not the buildings are conducive to creating an effec- tive university community but first reflections seem hopeful. Students who have come to Surrey from other universities whose build- ings tend to spread over a wide area are in fact immensely pleased with the campus. There is a definite interaction between the students, and also between the students and staff . . . The residential core forms, a com- munity of its own and this community, judging from student opinion, seems to be very acceptable ...'

Professor Elton is Head of the Institute for Educational Technology: 'I was in charge of the first department that moved from Battersea to Guildford . . . I have been on campus on all months of the year. all days of the week and most hours of the day. I know most of the snags and nearly all are due to the desperate shortage of money.

The best feature of the buildings is their juxtaposition, the bridges that link them and make rapid transit possible at a number of levels, and the close parking which makes all journeys short and almost dry in even the worst of weathers. In consequence it is easy to maintain contact with colleagues and students,'and when I want to see people, I generally meet them casually before I have even had time to fix a formal meeting time. The individual buildings are not dis- tinguished but the view from the upper floors and the glimpses at a number of vantage points are pleasant and even exciting. The lecture and theatre block is a most ingenious maze, which has satisfied an astonishing variety of demands—day to day lecturing. musical performances. conferences with up to 1,000 participants, exhibitions and many other activities.

In spite of the stringency of our pay- masters combined with the urgency of our needs the buildings work and the University prospers—more than it would perhaps in more palatial surroundings.'

Lastly the views of Dr Leggett. the Vice- Chancellor: The underlying concept of the overall development plan is only now becom- ing apparent. and individual buildings are finding their place in a coherent complex. Some three months ago, a year since under- graduates first took up residence, a confer- ence on Building Progress held in the Uni- versity was attended by some 200 staff and students. The overall architectural interpreta- tion was considered to be good, and, indeed, exciting.'

If SPECTATOR readers are to be well in- formed about the new University of Surrey, these user comments and design priorities may be thought as useful as the views of a visiting critic.