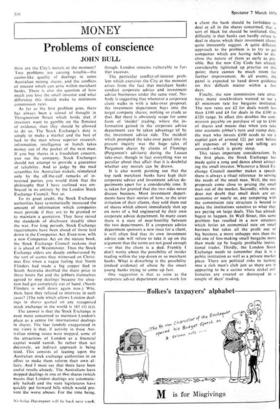 How are the City's morals at the moment?

Two problems are causing trouble—the casino-like quality of dealings in some Australian mining shares, and the conflicts of interest which can arise within merchant banks. There is also the question of how much you love the small investor and what difference this should make to minimum commission rates.

As far as the first problem goes, there has always been a school of thought in Throgmorton Street which holds that if investors want to gamble on the flimsiest of evidence, then they should be allowed to do so. The Stock Exchange's duty is simply to make a market and the best of luck to the man whose superior research, information, intelligence or hunch takes money out of the pocket of the next man. If you buy shares in a fraudulent concern, you sue the company. Stock Exchanges should not attempt to provide a guarantee of reliability. And to judge by the mad scrambles for Australian nickels, stimulated only by the off-the-cuff remarks of in- terested parties, you would think that the philosophy that I have outlined was em- braced in its entirety by the London Stock Exchange Council. Not so.

To its great credit, the Stock Exchange authorities have systematically increased the amount of information which companies must provide if they are to be granted or to maintain a quotation. They have raised the standards of disclosure steadily since the war. For long periods, Stock Exchange requirements have been ahead of those laid down in the Companies Act. Even now, with a new Companies Act on the statute book. the Stock Exchange Council reckons that it is ahead of Westminster. Thus the Stock Exchange elders are deeply embarrassed by the sort of scenes they witnessed on Christ- mas Eve when a vague feeling that North Flinders had made a big copper find in South Australia doubled the share price in three hours flat and the jobbers themselves agreed to stop dealings- because the situa- tion had got completely out of hand. (North Flinders is well down again now.) Why, then, have they refused to intervene in such cases? (The rule which allows London deal- ings in shares quoted on any recognised stock exchange in the world is 163 (1) (e)).

The answer is that the Stock Exchange is even more concerned to maintain London's place as a centre for international dealings in shares. The fear (unduly exaggerated in my view) is that, if activity in these Aus- tralian mining issues were stopped, some of the attractions of London as a financial capital would vanish. So rather than act decisively, an indirect approach is being tried. This consists of leaning upon the Australian stock exchange authorities in an effort to make them reform their own af- fairs. And I must say that there have been useful results already. The Australians have stopped dealings in one or t4vo shares (which means that London dealings are automatic- ally halted) and the state legislatures have quickly put forward bills which would pre- vent the worst abuses. For the time being,

Nicholas Davenport will be back next week.

The particular conflict-of-interest prob- lem which exercises the City at the moment arises from the fact that merchant banks conduct corporate advice and investment advice businesses under the same roof. No- body is suggesting that whenever a corporate client walks in with a take-over proposal, the investment department buys into the target company shares; nothing so crude as that. But there is obviously scope for some form of 'insider' trading, where the in-, formation gained in the corporate advice department can be taken advantage -of by the investment advice side. The incident which prompted the take-over panel into its present inquiry was the huge sales of Pergamon shares by clients of Flemings (Pergamon's advisers) during the Leasco take-over, though in fact everything was so peculiar about that affair that it is doubtful whether any morals can be drawn.

It is also worth pointing out that the top rank merchant banks have kept their corporate advice and investment advice de- partments apart for a considerable time. It is taken for granted that the two sides never discuss business. Most investment depart- ments have their stories of how, to the utter irritation of their clients, they sold them out of shares which almost immediately shot up on news of a bid engineered by their own corporate advice department. In many cases there is a state of near-hostility between the two departments. If a corporate advice department sponsors a new issue for a client, it will often find that its own investment advice side will refuse to take it up on the argument that the terms are not good enough —or that the client is a dud. Frankly I don't worry about the possibility of insider trading within the top dozen or so merchant banks. What is disturbing is the possibility • (indeed evidence) of abuse by the smart young banks trying to come up fast.

One suggestion is that as soon as the corporate advice department starts work for a client the bank should be forbidden to deal at all in the shares concerned, that a sort of black list should be instituted. One difficulty is that banks can hardly refuse to deal in shares which their investment clients quite innocently suggest. A quite different approach to the problem is to try to get companies which are having talks to dis- close the nature of them as early as pos- sible. But the new City Code has already considerably tightened up practice on this point; there cannot be much room for further improvement. At all events, the panel is expected to hand down guidance on this difficult matter within a few days.

Finally, the new commission rate struc- ture; many stockbrokers wanted to see a £5 minimum rate for bargains instituted, The new rates are £2 for deals worth less than £100 and £4 for deals in the £100 to £320 range. In effect this doubles the com- mission payable on purchase of up to £160 of shares and means that when you take into accounts jobber's turn and stamp duty, the man who invests £100 needs to see a capital gain of around 124- per cent before all expenses of buying and selling are covered—which is pretty steep.

This raises important considerations. In the first place, the Stock Exchange has made quite a song and dance about attract- ing the small investor. Whenever a Stock Ex- change Council member makes a speech. there is always a ritual reference to serving the needs of the small man. Well, the new proposals come close to pricing the small man out of the market. Secondly, while one does not doubt that small deals are un- economic or nearly so, any tampering with the commission rate structure is bound to make the institutions sensitive to what they are paying on large deals. This has already begun to happen. In Wall Street, this same problem has resulted in a new structure which levies an economical rate on small business but takes all the profit out of big business, a more unhappy mix than the old one of loss-making small bargains more than made up by hugely profitable institu- tional trades. Thirdly, the London Stock Exchange needs to remember that it is a public institution as well as a private market place. There are political risks to turning into a rich man's club just as there are in appearing to be a casino where nickel mil- lionaires are created or destroyed in a couple of days' trading.

M is for Misgivings