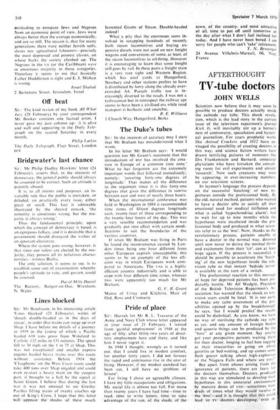 Sir: In the interests of accuracy may I state that Mr Braham has misunderstood what I wrote.

In his letter Mr Braham says: 'I would question too Mr Grant's statement that the introduction of BST has involved the crea- tion in Europe of a common time zone.' What he has forgotten are the extremely important words that followed immediately; namely: 'covering forty-one degrees of longtitude.' That makes all the difference to the argument since it is this forty-one degrees that gives the difference in sunrise between east and west of nearly three hours.

When the international conference was

held in Washington in 1884 it recommended time zones of fifteen- degrees longtitude each, twenty-four of these corresponding to the twenty-four hours of the day. This was a very sensible recommendation and was gradually put into effect with certain modi- fications to suit the boundaries of the various countries.

If when Mr Braham was living in Paris he found the inconvenience caused by Lon- don times being one hour different from other European capitals unacceptable, this seems to be an example of the less effi- cient way in which Europeans work com- pared to Americans. The USA is a highly efficient country industrially and is able to cope with four different time zones, whereas two were apparently too much for Mr Braham.