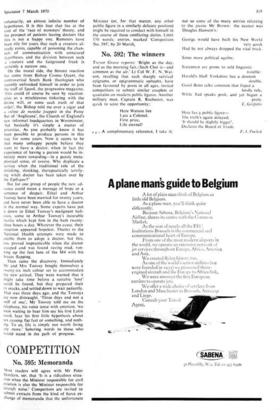 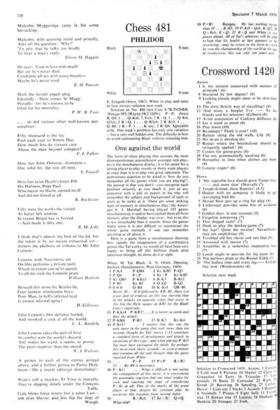 Most readers will agree with Mr Peter Hordern, MP, that 'It is a ridiculous situa- tion when the Minister responsible for civil aviation is also the Minister responsible for aircraft noise.' Competitors are invited to submit extracts from the kind of fierce ex- change of memoranda that the unfortunate Minister (or, for that matter, any other public figure in a similarly delicate position) might be required to conduct with himself in the course of these conflicting duties. Limit 150 words; entries, marked 'Competition No. 595', by 20 March.,

Trevor Grove reports: 'Bright as the day, and as the morning fair,/Such Clod is—and common as the air.' Lt Col W. F. N. Wat- son, recalling that such sharply satirical epigrams, or epigrammatic epitaphs, have been favoured by poets in all ages, invited competitors to submit similar couplets or quatrains on modern public figures. Another military man, Captain R. Rochester, was quick to seize the opportunity:

a A complimentary reference, I take it

not so some of the many entries referring to the jocose Mr Brown: the neatest was Douglas Hawson's: George would have built his New World very quick Had he not always dropped the vital brick.

Some more political squibs: Statesmen are prone to odd linguistic trouble: Harold's bluff Yorkshire has a donnish double, Good Benn talks common that lisped a lordly role, While Ted speaks posh, and yet began a prole. T. Griffiths Here lies a public figure- 1 he truth's again delayed; 'It should be slightly bigger', Declares the Board of Trade. F. I. Pocket

Malcolm Muggeridge came in for some barracking: Malcolm. with questing mind and proudly, Asks oft the question : 'Why?'

'is pity that he talks too loudly To hear a man's reply. Eileen M. Haggitt He says: 'I am in love with death' But yet he's never died,

Condemns all sex with every breath—

y s so did various other well-known per- sonalities:

Fifty thousand is the fee Paid each year to Simon Dee. How much less do viewers care About the man beyond compere?

Who meant no Harm. opined no ill And did not Good at all. R. Rochester Fifty were the works she voiced As better left undone.

In transit Brigid has re-Joyced —And made it fifty-one. R. M. Jolly

I think that's almost the best of the lot, but the talent is by no means exhausted yet— witness the plethora of tributes to Mr John Lennon:

I.ennon. with Narcissistic art On film performs a private part, Which in extent can ne'er equate To all the cock the Lennons prate.

D. Gillmore John Lennon's film defiance hurled, And snooked a cock at all the world.

C. L. Bandela John I ennon takes the part of love In combat with the world's discord.

And makes his stand, it seems, to prove/ The penis mightier than the sword.

W. I. Webster A guinea to each of the entries printed above, and a further guinea to Patric Dick- inson—'On a recent editorial disturbance':