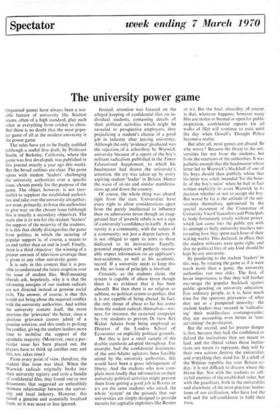 Organised games have always been a not- able feature of university life. Student teams, often of a high standard, play each other at everything from cricket to chess. But there is no doubt that the most popu- lar game of all at the modern university is the power game.

The rules have yet to be finally codified (although a useful first draft, by Professor Searle, of Berkeley, California, where the game was first developed, was published in this journal exactly a year ago this week). But the broad outlines are clear. The game opens with student 'leaders' challenging the university authorities over a specific issue, chosen purely for the purpose of the game. The object, however, is not (nor- mally) to supplant the established authori- ties and take over the university altogether; nor even, primarily, to force the authorities to give way on the chosen issue (although this is usually a secondary objective). The main aim is to win for the student 'leaders' the support of the majority of the students. It is this that chiefly distinguishes the game from politics, in which the securing of popular support is, of course, a means to an end rather than an end in itself. Finally, there is a third objective: the winning of a greater amount of television coverage than is given to any other university game.

It is only in this context that it is pos- sible to understand the latest eruption over the issue of student files. Well-meaning liberals ask, hopelessly, why it is that the reforming energies of our student radicals are not directed instead at genuine social evils. The answer, of course, is that this would not bring about the required conflict with the university authorities. And within the university context itself, the more spurious the 'grievance' the better, since a spurious grievance cannot admit of a genuine solution; and this tends to prolong the conflict, giving the student leaders more time to mobilise the support of the apathetic majority. (Moreover, once a par- ticular issue has been played out, the players have to think up another one; and this, too, takes time.) From every point of view, therefore, the student files issue was ideal. When the Warwick radicals originally broke into their university registry and stole a bundle of confidential files, they found one or two documents that suggested an unhealthily intimate relationship between the univer- sity and local industry. However, this raised a genuine and essentially localised issue, so it was more or less ignored. Instead, attention was focused on the alleged keeping of confidential files on in- dividual students, containing details of their political activities which might be revealed to prospective employers, thus prejudicing a student's chance of a good job in industry after leaving university.

Although the only 'evidence' produced was the rejection,of a schoolboy by Warwick university because of a report of the boy's militant radicalism published in the Times Educational Supplement, to which his headmaster had drawn the university's attention, the cry was taken up by every aspiring student 'leader' in Britain. Hence the wave of sit-ins and similar manifesta- tions up and down the country.

Of course, the whole thing was absurd right from the start. Universities have every right to allow considerations apart from the purely intellectual to influence then on admissions (even though an exag- gerated fear of juvenile rebels is not a sign of a university's confidence in itself). A uni- versity is a community, with the values of a community; not just a degree factory. It is not obliged to open its arms to those dedicated to its destruction. Equally, potential employers will perfectly reason- ably expect information on an applicant's non-academic, as well as his academic, record. If a university needs to keep this on file, no issue of principle is involved.

Certainly, as the students claim, the system is capable of abuse (even though there is no evidence that it has been abused). But then there is no religion so sublime, no political system so perfect, that it is not capable of being abused. In fact, the only threat of abuse so far has come from the student radicals themselves—wit- ness, for instance, the sustained campaign by LSE students to prevent Dr (now Sir) Walter Adams from being employed as Director of the London School of Economics on explicitly political grounds.

But this is just a small sample of the double standards adopted throughout. For example, had the confidential documents of the anti-Adams agitators been forcibly seized by the university authorities, this would have been a gross infringement of liberty. And the students who now com- plain most loudly that information on their university political activities might prevent them from getting a good job in Rootes or To are the same students who attack the whole 'system' on the grounds that our universities are simply designed to provide recruits for capitalist exploiters like Rootes or la. But the final, absurdity, of course, is that, whatever happens, however many files are stolen or burned or open for public inspection, confidential reports (in all walks of life) will continue to exist until the day when Orwell's Thought Police become a reality.

But after all, most games are absurd. So why worry? Because the threat to the uni- versities lies not from the students, but from the reactions of the authorities. It was pathetic enough that the headmaster whose letter led to Warwick's blackball of one of his boys should then publicly whine that his letter was solely intended 'for the bene- fit of the boy's tutor' when he had in fact written explicitly to assist Warwick in its decision whether or not to accept the boy. But worse by far is the attitude of the uni- versities themselves, epitomised by the special statement of the Committee of University Vice-Chancellors and Principals (a body fortunately totally without power, which last came into the public eye with its attempt to bully university teachers into revealing how they spent each hour of their waking week). This declared, in effect, that the student militants were quite right, and that no political files of any kind should be kept by any university.

By pandering to the student 'leaders' in this way, by treating the game as if it were much more than a game, the university authorities run two risks. The first, of lesser importance, is that they will further encourage the popular backlash against public spending on university education. Few ordinary people, as it is, have much time for the spurious grievances of what they see as a pampered minority: the student leaders may succeed in 'radicalis- ing' their middle-class contemporaries; they are succeeding even better in 'con- servatising' the proletariat.

But the second, and far greater danger is that, because they lack the confidence to defend the institutions they are meant to lead, and the liberal values those institu- tions are meant to represent, they will by their own actions destroy the universities and everything they stand for. If a whiff of the Weimar republic lies over Britain to- day, it is not difficult to discern where the blame lies. Not with the students or self- styled enemies of the established order, but with the guardians, both in the universities and elsewhere, of the most precious institu- tions of our civilisation, who have lost the will and the self-confidence to fulfil their trust.