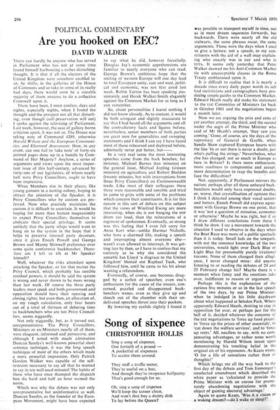 Are you hooked on EEC?

There can hardly be anyone who has served in Parliament who has not at some time found himself harbouring a rather disturbing thought. It is that if all the electors of the United Kingdom were somehow enabled to sit, by shifts, in the galleries of the House of Commons and so take in some of its really bad days, there would soon be a sizeable majority of them anxious to do a collective Cromwell upon it.

There have been, I must confess, days and nights, especially nights, when I found the thought and the prospect not all that disturb- ing, even though (self-preservation will out) 1 spoke against the televising of Parliament. Last week, however, the ease of gallery-borne criticism apart, it was not so. The House was taking note of Command 4289, otherwise Harold Wilson and the European Communi- ties, and Electoral Assessment. How, in any event, can one fail to 'take note' of forty-six printed pages done up in a bundle by Com- mand of Her Majesty? Anyhow, a series of arguments and views upon the most impor- tant issue of this half-century, advanced by forty-one of our legislators, of whom nearly half were Privy Councillors, ought to have been impressive.

When Members rise in their places, like young gannets in a nesting colony, hoping to attract the attention of the Speaker, it is Privy Councillors who by custom are pre- ferred. Now who precisely maintains the custom it is difficult to ascertain. It would be hoping for more than human magnanimity to expect Privy Councillors themselves to abdicate their special privilege. It seems unlikely that the party whips would want to hang on to the system in the hope that it helps to preserve internal party decorum, since it gives Enoch Powell and George Brown and Manny Shinwell preference over some quite conformist backbencher. There- fore am I left to tilt at Mr Speaker himself?

Well, whatever the risks attendant upon attacking the Speaker, or for that matter the Privy Council, which probably has terrible residual powers, it should be said the system is wrong and never shown to be more wrong than last week. Of course the three party leaders must speak and both government and opposition should have their opening and closing rights; but even then, an allocation of, on my rough calculation, only four hours out of a total of thirteen of debating time to backbenchers who are not Privy Council- lors, seems niggardly.

Not only niggardly, but, as it turned out, unrepresentative. The Privy Councillors, Ministers or ex-Ministers nearly all of them, were eloquent, informed and persuasive, and although I noted with much admiration Duncan Sandys's well-known powerful short sentence technique, it was the long speech technique of most of the others which made a more powerful impression. Only Patrick Gordon Walker was capable of the self- restraint necessary to say all that he wanted to say in ten well-used minute#. The habits of those who have once thumped the dispatch box die hard and half an hour seemed the norm.

Which was why the debate was not only unrepresentative but uninformative as well. Duncan Sandys, as the founder of the Euro- pean Movement, might have been expected to say what he did, however forcefully. Douglas Jay's economic apprehensions are familiar to nearly everyone who can read.

George Brown's ambitious hope that the uniting of western Europe will one day lead to total European unity, east and west, politi- cal and economic, was not first aired last week. Robin Turton has been speaking pas- sionately and Derek Walker-Smith elegantly against the Common Market for as long as I can remember.

So, about personalities I learnt nothing I did not know already. As to content, it would be both arrogant and slightly inaccurate to say that I had heard all the arguments and all the contradictory facts and figures before; nevertheless, senior members of both parties are great men for generalities and sweeping statements and I think I can say I have heard most of those rehearsed and deployed before, admittedly never put better, but—.

In a very real sense the most interesting speeches came from the back benches; for instance, Michael Barnes (ten minutes) on the general issue, Michael Jopling (sixteen minutes) on agriculture and Robert Sheldon (twenty minutes, but with interruptions from three Privy Councillors) on Commonwealth trade. Like most of their colleagues these three were reasonable and sensible and tried to come to grips with some of the problems which concern their constituents. It is for this reason in this sort of debate on this subject that the views of Winifred Ewing are more interesting, when she is not banging the SNP drum too loud, than the reiterations of a regiment of spokesmen. Eventually, so strong was this feeling that I even felt sorry for Anne Kerr who—unlike Harmar Nicholls, who bore a charmed life, making a speech and interrupting almost everyone else— wasn't even allowed to interrupt. It was get- ting late by then, so I have to confess that my curiosity as to why she considered the amiable Ian Lloyd 'a disgrace to the United Kingdom' blotted out Raphael Tuck, who followed him, until he came to his bit about wanting a referendum.

Eventually, of course, one becomes drug- ged by a surfeit of speeches; even one's enthusiasm for the cause of the sincere, con- cerned, puzzled and disappointed back- benchers wanes, even as they give up and slouch out of the chamber with their un- delivered speeches thrust into their pockets.

By lowering my eyelids slightly I found it Was possible to transport myself in time, not as in most dream sequences forwards, but backwards. There were nearly all the old stalwarts, the same phrases recur, the same arguments. Those were the days when I used to give a lecture, not a speech, to my con- stituents with the aid of a wall map explain- ing who exactly was in EEC and who in EFTA. It seems only yesterday that Peter Walker showed me his Anti-Common Market tie with unacceptable clauses in the Rome Treaty emblazoned upon it.

It is difficult to realise that it is nearly a decade since every daily paper worth its salt had statisticians and cartographers busy pro- ducing simple guides to the Common Market. Edward Heath really did make his statement to the EEC Committee of Ministers far back in October 1961 and the negotiations began a month later.

Now we are arguing the pros and cons of yet another attempt, the third, and the second under the aegis of the Prime Minister who said of Mr Heath's attempt, 'they saw you coming' Gone, of course, are the days of the supremacy of General de Gaulle, when Sandie Shaw captured European hearts with the line 'In or out there is never a doubt, just who's pulling the strings' Nevertheless, what else has changed, not so much in Europe as here in Britain? Is there more enthusiasm, more readiness to compromise and accept, more determination to reap the benefits and face the difficulties?

Not, apparently, if Parliament mirrors the nation; perhaps after all those unheard back- - benchers would only have expressed doubts, or, worse, that crystallisation of opinion that I think I detected among their vocal seniors and betters. Enoch Powell did express agree- ment with George Brown on one point, that it was 'not a question of minutiae, economic or otherwise.' Maybe he was right, but if so I draw different conclusions from those I think he drew. I see a movement towards the situation I used to observe in the days when the Boat Race was more of a public spectacle than it is today. Small lads on the towpath, with not the remotest knowledge of the two universities, would fight over Dark Blue or Light Blue for presumably purely irrational reasons. None of them changed their allegi- ance, I never changed mine: did anyone listening to or reading the debates of 24 and 25 February change his? Maybe there is a moment when fancy and the emotions take over, indifferent to reason or argument.

Perhaps this is the explanation of the curious five minutes or so in the last speech of the two days, by our Prime Minister, when he indulged in his little daydream about what happened at Selsdon Park. Where apparently Edward Heath, desiring to stay in opposition for ever, or perhaps just for the hell of it, decided whatever the outcome of the EEC negotiations to 'force up food prices'. to 'force up the prices of other essentials', to 'cut down the welfare services', and to 'force up rents' All, needless to say, with no com- pensating advantages, or rather none worth mentioning by Harold Wilson intent upon demonstrating his touching belief in the original sin of his opponents. As Keats wrote. '0 for a life of sensations rather than of thoughts I ' Which brings me all the way back to the first day of the debate and Tom Iremonger's unselected amendment which described the white paper as 'calculated to provide the Prime Minister with an excuse for prema- turely abandoning negotiations with the object of gaining electoral advantage.' Again to quote Keats, `Was it a vision or a waking dream?—do I wake or sleep?'