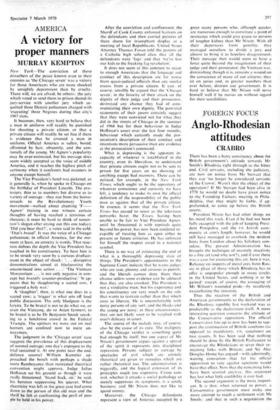 A victory for proper manners

New York—The conviction of those disturbers of the peace known even to their enemies as 'the Chicago seven' was a victory for those Americans who are more shocked by unsightly deportment than by cruelty. There will, we are afraid, be others: the jury which voted to send them to prison shared its jury-service with another jury which ac- quitted three Detroit policemen charged with 'executing' three Negroes during that city's 1967 riots.

It becomes, then, very hard to believe that a man in uniform will readily be punished for shooting a private citizen, or that a private citizen will readily be set free if there is evidence that he aroused a man in uniform. Official America is sullen, bored. affronted by hair, obscenity, and the con- tumely of the young. Mr Agnew's popularity may be over-estimated, but his message does seem widely accepted as the voice of middle America, and it reaches the highest pitch of acrimony when it confronts bad manners in anyone except himself.

The Vice President's hotel was picketed, as it generally is, when he spoke in Chicago on the birthday of President Lincoln. The pro- testers, thin as to numbers but diverse as to variety of outrage—they ran from the homo- sexuals to the Revolutionary Youth movement—walked about chanting 'F— Agnew' (raising in one witness certain thoughts of having reached a terminus of rhetoric; it must be hard to think of tomor- row's slogan after crying out this one today). `Did you bear that?', a voice said in the cold. 'That's brutal'. It was the voice of a Chicago policeman; in official America, for the mo- ment at least, an atrocity is words. That reac- tion defines the depth the Vice President has touched in his constituency. To hear him is to be struck very soon by a curious displace- ment in the object of shock: .. disruptive demonstrations aimed at bludgeoning the unconvinced into action . . ."The Vietnam Moratorium ... is not only negative in con- cept but brutally counter-productive.' It ap- pears that by slaughtering a sacred cow. I triggered a holy war.'

A 'slaughter', then, is what one does to a sacred cow; a 'trigger' is what sets off loud public discussion. The only bludgeon is the larynx. To be brutal is not to do what we, or even the Vietcong, do to Asian farmers; to be brutal is to be Dr Benjamin Spock speak- ing to a lunchtime crowd in the Federal Triangle. The epithets we wore out on real horrors are confined now to mere an- noyances.

The judgment in the 'Chicago seven' case suggests the prevalence of this displacement of normal outrage; one day's exposure to the trial sustained it. At one point near the end, defence counsel William Kunstler ap- proached the bench with perhaps a shade more flamboyance than restrained theatrical convention might approve. Judge Julius Hoffman sat his ground as though it were really threatened. 'Stand back, sir,' he said, his heroism suppressing his quaver. What electricity was left in the great case had come down to the person of this old man and the thrill he felt at confronting the peril of peo- ple he held in his power. After the conviction and confinement. the Sheriff of Cook County enforced haircuts on the defendants and then carried pictures of them shorn for triumphant display at a meeting of local Republicans. United States Attorney Thomas Foran told the parents of a Catholic high school class that all the defendants were 'fags' and that `we've lost our kids to the freaking fag revolution'.

It does not seem at this juncture to occur to enough Americans that the language and conduct of this description are far worse from quasi-judicial officials than any similar excess from a private citizen. It can, of course, sensibly be argued that the 'Chicago seven', in the ferocity of their attack on the dignity of their judge and their prosecutor, destroyed any chance they had of com- municating their own dignity. The post-trial statements of their jurors certainly suggest that they were convicted not for what they did in the streets of Chicago in the summer of 1968 but for their behaviour in Judge Hoffman's court over the last four months, behaviour which certainly made the pro- secution's description of their conduct and intentions more persuasive than any evidence at the prosecution's command.

What is depressing is the apparent in- capacity of whatever is 'established' in the country, even its liberalism, to understand that private citizens ought not to be sent to prison for five years on no showing of anything except bad manners. There can be noticed, for example, in the New York Times, which ought to be the repository of whatever conscience and curiosity we have left, a tendency to make its own the official definition of the responsibility of the public man as against that of the private citizen. In essence, it seems that the New York Times has ceased to resist as the television networks have; the Times, having been unable to be fair to Vice President Agnew until he threatened it with reprisals quite beyond his power, has now been rendered in- capable of treating him as open either to present or future criticism. He has enforced for himself the respect owed to a national symbol.

There is no way of estimating the end of what is a thoroughly depressing state of things. The President's appointments to the Supreme Court indicate that he wants judges' who are taut, gloomy and anxious to punish; and the liberals cannot deny them their chance unless some evidence can be adduced that they are also crooked. The President is not a vindictive man; but his experience and his constituency are very much on the side that wants to restrain rather than that which aims to liberate. He is uncomfortable with noisy persons of any sort: and the blacks and the young are noisy: in these circumstances. they are not likely soon to be weighed with much delicacy in court.

The source of the malady may, of course, also be the cause of its cure. The malignity of the Chicago verdict is something quite bad enough by itself; but one aspect of Mr Nikon's government argues against a spread of the spirit it represents into disciplined repression. Persons subject to outrage by spectacles of evil which are entirely rhetorical are given to remedies which are rather rhetorical too. The administration is niggardly, and the logical extension of its principles much too expensive. Crime con- trol. whether it attacks a social pathology or merely suppresses its symptoms, is a costly business; and Mr Nixon does not like to spend money.

Moreover, the Chicago defendants represent a view of America accepted by a great many persons who, although quieter. are numerous enough to constitute a point of resistance which could give pause to persons of tougher kidney than Mr Nixon. With all their departures from gentility. they managed somehow to divide a jury and almost to bring it to hopeless disagreement. Their message then would seem to have a force quite beyond the imagination of their judge and their prosecutor; the Vietnam war. diminishing though it is, remains a wound on the conscience of many of our citizens; they sit on juries and, in greater numbers than ever before, distrust our government. It is hard to believe that Mr Nixon will serve himself well if he moves on without regard for their sensibilities.