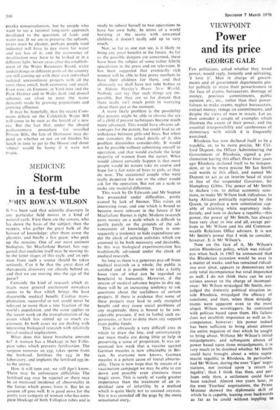 Storm in a test-tube

It his been said that scientific discovery in any particular field moves in a kind of natural cycle. First there are the sowers, who lay down the basis of the subject; then the reapers, who gather the great bulk of the harvest of knowledge; after them come the gleaners. and finally a few geese, who peck up the remains. One of our most eminent biologists, Sir Macfarlane Burnet. has sug- gested that medicine itself may be moving in- to the latter stages of this cycle, and an opi- nion from such a source should be taken seriously. Can it be that the great days of therapeutic discovery are already behind us, and that we are moving into the age of the geese?

Certainly the kind of research which at- tracts most general excitement nowadays seems to be that which brings the least discernible medical benefit. Cardiac trans- plantation, successful or not, could never be relevant to more than a tiny fraction of the world's population, and the same applies to the recent work on the transplantation of the ovum which has stirred up so much ex- citement. In both cases we are dealing with interesting biological research with relatively trivial medical implications.

What does this latest brouhaha amount to? A woman has a blockage in her Fallo- pian tubes which prevents fertilisation. The surgeon removes an egg, takes sperm from the husband, fertilises the egg in the • laboratory, and implants the fertilised egg in- to the uterus.

How it will turn out, we still dVn't know. There may be unforeseen difficulties The fertilised egg may be rejected or there may be an increased incidence of abnormality in the foetus which grows from it. But let us assume all goes well. It is good news for the pretty rare category of woman who has com- plete blockage of both Fallopian tubes and is ready to submit herself to two operations to have her own baby. In terms of a world bursting at the seams with unwanted children, it doesn't really add up to very much.

Nor, so far as one can see, is it likely to bring any great benefits in the future. As far as the possible dangers are concerned, these have been the subject of some rather febrile speculation in the press and on television. It has been suggested that eventually rich women will be able to hire proxy mothers to have their children for them, and that ultimately we shall have test tube babies as in Aldous Huxley's Brave New World. Nobody can say that such things are im- possible. But they are so far distant that there really isn't much point in worrying about them just at the moment.

A more likely problem is the possibility that parents might be able to choose the sex of a child if present techniques became much more advanced. This would have obvious ad- vantages for the parent, but could lead to an imbalance between girls and boys. But when one considers the actual details of it, this problem diminishes considerably. It would not be possible without submitting oneself to operation, and that would exclude the large majority of women from the outset. What would almost certainly happen is that most people would let nature take its course and hope for a fair ratio of boys to girls, as they do now. The occasional couple who were really desperate for one or the other would ask for the operation. But not on a scale to make any material difference.

This work by Dr Edwards and Mr Steptoe has proceeded under difficulties, partly caused by lack of finance. This raises an interesting issue, and one which is bound to become more relevant in the future if Sir Macfarlane Burnet is right. Modern research costs money on a scale which is difficult to justify purely on the grounds of the ad- vancement of knowledge. There is con- sequently a tendency to hide expenditure un- der the cloak of certain activities which are assumed to be both necessary and desirable. In this way biological experimentation has traditionally advanced under the cloak of medical research.

So long as there is a generous pay-off from medical research as a whole, the public is satisfied and it is possible to take a fairly loose view of what can be regarded as beneficial to humanity. However, if the stream of medical advance begins to dry up, there will be an increasing tendency to ask questions about the usefulness of certain projects. If there is evidence that some of these projects may lead to only marginal benefit and may cause social problems of any magnitude, there is bound to be con- siderable pressure, if not to forbid such ex- periments, at least to deny them any support from public funds.

This is obviously a very difficult area in which to draw the line, and unfortunately our mass media are doing little to help in preserving a sense of proportion. It was an- nounced last week that a vaccine against German measles is now obtainable in Bri- tain. As everyone now knows, German measles is a potent cause of foetal abnorm- ality. There is now hope that by means of a vaccination campaign we may be able to cut down and possibly even eliminate these tragic cases. This is surely of vastly greater importance than the treatment of an in- dividual case of infertility by a method which is quite likely not to succeed anyway. Yet it was crowded off the page by the more sensational story.