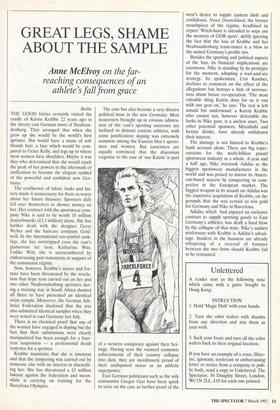 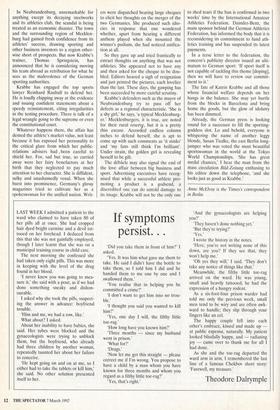 GREAT LEGS, SHAME ABOUT THE SAMPLE

Anne McElvoy on the far-

reaching consequences of an athlete's fall from grace

THE GOOD fairies certainly visited the cradle of Katrin Krabbe 22 years ago in the dreary east German town of Neubran- denburg. They arranged that when she grew up she would be the world's best sprinter. She would have a mane of soft blonde hair, a face which would be com- pared to Grace Kelly, and legs up to where most women have shoulders. Maybe it was they who determined that she would reach the peak of her powers in the aftermath of unification to become the elegant symbol of the powerful and confident new Ger- many.

The confluence of talent, looks and his- tory made it unnecessary for them to worry about her future finances. Sponsors duly fell over themselves to shower money on her. Her contract with the sportswear com- pany Nike is said to be worth 10 million deutschmarks (0.3 million) alone. She has further deals with the designer Gerry Weber and the haircare company Gold- well. In the international sex-symbol rank- ings, she has outstripped even the east's glamorous ice icon, Katharina Witt. Unlike Witt, she is unencumbered by embarrassing past statements in support of the communist regime.

Now, however, Krabbe's career and for- tune have been threatened by the revela- tion that dope tests carried out on her and two other Neubrandenburg sprinters dur- ing a training stay in South Africa showed all three to have presented an identical urine sample. Moreover, the German Ath- letics Federation disclosed that the trio also submitted identical samples when they were tested in east Germany last July.

There is no chemical proof that any of the women have engaged in doping but the fact that their submissions were clearly manipulated has been enough for a four- year suspension — a professional death sentence for a sprinter.

Krabbe maintains that she is innocent and that the tampering was carried out by someone else with an interest in discredit- ing her. She has threatened a 0 million lawsuit against the federation and mean- while is carrying on training for the Barcelona Olympics. The case has also become a very divisive political issue in the new Germany. Most westerners brought up in envious admira- tion of the east's sporting successes are inclined to distrust eastern athletes, with some justification: doping was extremely common among the Eastern bloc's sports- men and women. But easterners are equally convinced that the draconian response to the case of 'our Katrin' is part of a western conspiracy against their her- itage. Having seen the vaunted economic achievements of their country collapse into dust, they are inordinately proud of their undisputed status as an athletic superpower.

west's desire to topple eastern idols and confidence. Neues Deutschland, the former mouthpiece of the regime, headlined its report `Witch-hunt is intended to wipe out the memory of GDR sport', deftly ignoring the fact that the loss of Krabbe and her Neubrandenburg team-mates is a blow to the united Germany's profile too.

Besides the sporting and political aspects of the ban, its financial implications are enormous. Nike is standing by its protegee for the moment, adopting a wait-and-see strategy. Its spokesman, Urst Kamber, declines to comment on the effect of the allegations but betrays a hint of nervous- ness about future co-operation. 'The most valuable thing Katrin does for us is run with our gear on,' he says. The rest is left unsaid but understood: a Katrin Krabbe who cannot run, however delectable she looks in Nike gear, is a useless asset. Two other potential sponsors, Mitsubishi and Isostar drinks, have already withdrawn their interest.

The damage is not limited to Krabbe's bank account alone. There are big reper- cussions for the multi-billion pound sportswear industry as a whole. A year and a half ago, Nike overtook Adidas as the biggest sportswear manufacturer in the world and was poised to mirror its Ameri- can-based success by conquering its com- petitor in the European market. The biggest weapon in its assault on Adidas was the expensive acquisition of Krabbe, on the grounds that she was certain to win gold for Germany and Nike in Barcelona.

Adidas, which had enjoyed an exclusive contract to supply sporting goods to East Germany's athletes, was dealt a hard blow by the collapse of that state. Nike's sudden misfortune with Krabbe is Adidas's advan- tage. Insiders in the business are already whispering of a reversal of fortunes between the two firms should Krabbe fail to be reinstated. In Neubrandenburg, unremarkable for anything except its decaying steelworks and its athletics club, the scandal is being treated as an economic disaster. The town and the surrounding region of Mecklen- burg had gained fresh confidence from its athletes' success, drawing sporting and other business investors to a region other- wise short of prospects. But now Krabbe's trainer, Thomas Springstein, has announced that he is considering moving his team abroad as retribution for what he sees as the malevolence of the German sporting authorities.

Krabbe has engaged the top sports lawyer Reinhard Rauball to defend her. He is loudly chipping away at the evidence and issuing confident statements about a speedy reinstatement, citing irregularities in the testing procedure. There is talk of a legal wrangle going to the supreme or even the constitutional court.

Whatever happens there, the affair has dented the athlete's market value, not least because it has exposed her personality to the critical glare from which her public- relations advisers had . been careful to shield her. For, sad but true, so carried away were her fairy benefactors at her birth that they neglected to pay much attention to her character. She is diffident, sulky and unashamedly venal. When she burst into prominence, Germany's glossy magazines tried to cultivate her as a spokeswoman for the unified nation. Writ-

ers were dispatched bearing large cheques to elicit her thoughts on the merger of the two Germanies. She produced such idio- cies in response that one wondered whether, apart from hearing a different anthem played when she mounted the winner's podium, she had noticed unifica- tion at all.

So they gave up and tried frantically to extract thoughts on anything that was not athletics. She appeared not to have any and then asked for the cheque to be dou- bled. Editors heaved a sigh of resignation and just printed the pictures, each lovelier than the last. These days, the gawping has been succeeded by more careful scrutiny.

Krabbe's defenders such as the mayor of Neubrandenburg try to pass off her defects as a regional characteristic. 'She is a shy girl,' he says, 'a typical Mecklenburg- er.' Mecklenburgers, it is true, are noted for their rural reservp, but it is a pretty thin excuse. Accorded endless column inches to defend herself, she is apt to come up with such comments as 'it stinks' and 'my fans still think I'm brilliant'. Under strain, the golden girl is revealing herself to be gilt.

The debacle may also signal the end of the love affair between big business and sport. Advertising executives have recog- nised that while a successful athlete pro- moting a product is a godsend, a discredited one can do untold damage to its image. Krabbe will not be the only one to shed tears if the ban is confirmed in two weeks' time by the International Amateur Athletics Federation. Daimler-Benz, the main sponsor behind the German Athletics Federation, has informed the body that it is reconsidering its commitment to fund ath- letics training and has suspended its latest payments.

In a terse letter to the federation, the concern's publicity director issued an ulti- matum to German sport: 'If sport itself is not capable of tackling this theme [doping], then we will have to review our commit- ment to it.'

The fate of Katrin Krabbe and all those whose financial welfare depends on her hangs in the balance. She may yet hurtle from the blocks in Barcelona and bring home the goods, but the glow of idolatry has been dimmed.

Already, the German press is looking round for a successor to fill the sporting- goddess slot. Lo and behold, everyone is whispering the name of another leggy blonde, Susan Tiedke, the east Berlin long- jumper who was voted the most beautiful sportswoman in the world at the Tokyo World Championships. 'She has great medal chances,' I hear the man from the mass circulation Bild-Zeitung enthusing to his editor down the telephone, 'and she looks just as good as Krabbe.'

Anne McElvoy is the Times's correspondent in Berlin