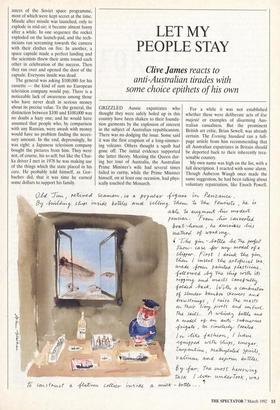 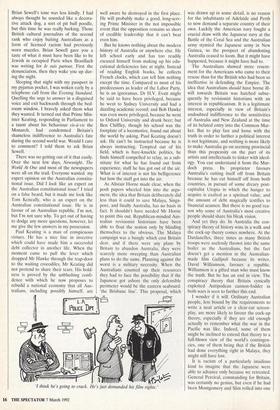 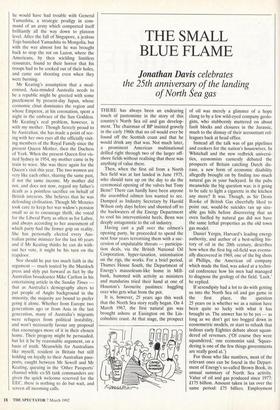 anti-Australian tirades with some choice epithets of his own

GRIZZLED Aussie expatriates who thought they were safely holed up in this country have been shaken to their founda- tion garments by the explosion of interest in the subject of Australian republicanism. There was no dodging the issue. Some said it was the first eruption of a long-simmer- ing volcano. Others thought a squib had gone off. The initial evidence supported the latter theory. Meeting the Queen dur- ing her tour of Australia, the Australian Prime Minister's wife had several times failed to curtsy, while the Prime Minister himself, on at least one occasion, had phys- ically touched the Monarch.

For a while it was not established whether these were deliberate acts of lese majeste or examples of disarming Aus- tralian casualness. But the prominent British art critic, Brian Sewell, was already certain. The Evening Standard ran a full- page article from him recommending that all Australian expatriates in Britain should be deported back to their inherently trea- sonable country.

My own name was high on the list, with a full description. I reacted with some alarm. Though Auberon Waugh once made the same suggestion, he had been talking about voluntary repatriation, like Enoch Powell.

Brian Sewell's tone was less kindly. I had always thought he sounded like a decora- tive attack dog, a sort of pit bull poodle, but this time he was really barking. Those British cultural journalists of the second rank who enjoy baiting Australians as a form of licensed racism had previously worn muzzles. Brian Sewell gave you a taste of what it must have been like to be Jewish in occupied Paris when Brasillach was writing for Je suis partout. First the denunciation, then they wake you up dur- ing the night.

Sleeping that night with my passport in my pyjamas pocket, I was woken early by a telephone call from the Evening Standard. Quelling the urge to answer in a disguised voice and exit backwards through the bed- room window, I bravely asked them what they wanted. It turned out that Prime Min- ister Keating, responding in Parliament to a taunt about his behaviour vis-à-vis the Monarch, had condemned Britain's shameless indifference to Australia's fate during the second world war. Would I care to comment? I told them to ask Brian Sewell.

Paul Keating is a man of conspicuous virtues. He has a nice line in invective which could have made him a successful debt collector in another life. When the moment came to pull the lever which dropped Mr Hawke through the trap-door to the waiting crocodiles, Mr Keating did not pretend to share their tears. His bold- ness is proved by the unblushing confi- dence with which he now proposes to rebuild a national economy that all Aus- tralians, including possibly himself, are well aware he destroyed in the first place. He will probably make a good, long-serv- ing Prime Minister in the not impossible event that the opposition remains so short of credible leadership that it can't beat even him.

But he knows nothing about the modern history of Australia or anywhere else. He left school early and has too readily excused himself from making up his edu- cational deficiencies late at night. Instead of reading English books, he collects French clocks, which can tell him nothing except the time. Compared to most of his predecessors as leader of the Labor Party, he is an ignoramus. Dr H.V. Evatt might be said to have been privileged, because he went to Sydney University and had a dazzling academic record; and Bob Hawke was even more privileged, because he went to Oxford University and drank beer; but Ben Chiffley, though his school was the footplate of a locomotive, found out about the wotld by asking. Paul Keating doesn't ask. He can't be instructed because he is always instructing. Tempted out of his field, which is bare-knuckle politics, he finds himself compelled to relay, as a sub- stitute for what he has found out from experience, stuff he has got out of the air. What is of interest is not his belligerence but how the stuff got into the air.

As Alistair Home made clear, when the posh papers wheeled him into the argu- ment, the idea that Britain deliberately did less than it could to save Malaya, Singa- pore, and finally Australia, has no basis in fact. It shouldn't have needed Mr Home to point this out. Republican-minded Aus- tralian revisionist historians have been able to float the notion only by blinding themselves to the obvious. The Malaya campaign was a bungle which cost Britain dear, and if there were any plans by Britain to abandon Australia, they were scarcely more sweeping than Australian plans to do the same. Planning against the worst is a military necessity. When the Australians counted up their resources they had to face the possibility that if the Japanese got ashore the only defensible perimeter would be the eastern seaboard: 'the Brisbane line'. This proposal, which JL 'I think he's going to crack. He's just demanded his film rights.' was drawn up in some detail, is no reason for the inhabitants of Adelaide and Perth to now demand a separate country of their own. Luckily the American navy fought a crucial draw with the Japanese navy at the Battle of the Coral Sea and the Australian army stymied the Japanese army in New Guinea, so the prospect of abandoning Australia ceased to loom. But it might have happened, because it might have had to.

The Australians showed more resent- ment for the Americans who came to their rescue than for the British who had been so ineffective in defending the Empire. The idea that Australians should have borne ill- will towards Britain was hatched subse- quently by revisionist historians with an interest in republicanism. It is a legitimate interest, especially in view of Britain's undoubted indifference to the sensitivities of Australia and New Zealand at the time of its belated entry into the Common Mar- ket. But to play fast and loose with the truth in order to further a political interest is not legitimate, and nothing is more likely to make Australia go on seeming provincial than this propensity on the part of its artists and intellectuals to tinker with ideol- ogy. You can understand it from the Mur- doch press. Its proprietor favours Australia's cutting itself off from Britain because he has cut himself off from both countries, in pursuit of some dreary post- capitalist Utopia in which the hunger to acquire is exalted as a spiritual value, and the amount of debt magically testifies to financial acumen. But there is no good rea- son why some of Australia's most creative people should share his bleak vision.

And yet they do. In Australia the con- spiracy theory of history wins in a walk and the cock-up theory comes nowhere. At the Dardanelles, three times as many British troops were uselessly thrown into the same boiler as the Australians, but the fact doesn't get a mention in the Australian- made film Gallipoli because its writer, David Williamson, favours a republic. Williamson is a gifted man who must know the truth. But he has an end in view. The conspiracy theory that Britain cynically exploited Antipodean cannon-fodder in both wars is seen to further this end.

I wonder if it will. Ordinary Australian people, less bound by the requirements to write a neat article or a clear-cut screen- play, are more likely to favour the cock-up theory, especially if they are old enough actually to remember what the war in the Pacific was like. Indeed, some of them might be inclined to extend that theory to a full-blown view of the world's contingen- cies, one of them being that if the British had done everything right in Malaya, they might still have lost.

It is racism of a particularly insidious kind to imagine that the Japanese were able to advance only because we retreated. General Percival, commanding for Britain, was certainly no genius, but even if he had been Montgomery and Slim rolled into one he would have had trouble with General Yamashita, a strategic prodigy in com- mand of an army which comported itself brilliantly all the way down to platoon level. After the fall of Singapore, a jealous Tojo banished Yamashita to Mongolia, but with the war almost lost he was brought back to stop the rot on Luzon, where the Americans, by then wielding limitless resources, found to their horror that his troops had to be cooked out of their holes, and came out shooting even when they were burning.

Mr Keating's assumption that a mod- ernised, Asia-minded Australia needs to be a republic might be greeted with some puzzlement by present-day Japan, whose economic clout dominates the region and whose Emperor, at his coronation, spent a night in the embrace of the Sun Goddess. Mr Keating's real problem, however, is with my mother. Though fiercely proud to be Australian, she has made a point of see- ing with her own eyes all the officially visit- ing members of the Royal Family since the present Queen Mother, then the Duchess of York. When the present Queen first vis- ited Sydney in 1954, my mother came in by train to wave. She was there again for the Queen's visit this year. The two women are very like each other, sharing the same past, if not the same income. My mother did not, and does not now, regard my father's death as a pointless sacrifice on behalf of British interests. She believes that he was defending civilisation. Though Mr Menzies took care to keep her war widow's pension small so as to encourage thrift, she voted for the Liberal Party as often as for Labor, and always according to her assessment of which party had the firmer grip on reality. She has personally elected every Aus- tralian prime minister for the last 60 years and if Mr Keating thinks he can do with- out her vote, it might be his turn on the trapdoor.

that as Australia's demography alters to put people of Anglo background in the minority, the majority are bound to prefer going it alone. Whether from Europe two generations ago or from Asia in the last generation, many of Australia's migrants were refugees from political instability, and won't necessarily favour any proposal that encourages more of it in their chosen home. Their progeny might be persuaded, but let it be by reasonable argument, on a basis of truth. Meanwhile for Australians like myself, resident in Britain but still holding on loyally to their Australian pass- ports, caught between Mr Sewell and Mr Keating, queuing in the 'Other Passports' channel while ex-SS tank commanders are given the quick welcome reserved for the EEC, there is nothing to do but wait, and screen all incoming calls.